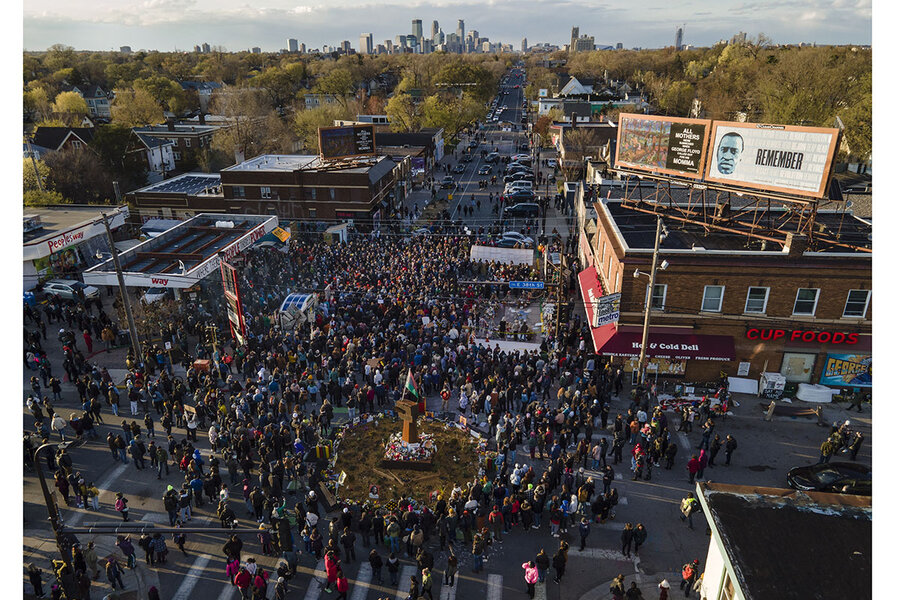 The “Free State of George Floyd” was in some ways a laboratory. In the hours after police clashed with demonstrators in Minneapolis, protesters occupied what became known as George Floyd Square. Police pulled back and an “autonomous zone” was born.

The same thing happened from Seattle to Atlanta to New York City. In 2016, the ranchers’ takeover of an Oregon wildlife refuge shows the same tactic can appeal to the right. But what happens when police withdraw and citizens take over?

Protesters are creating cop-free autonomous zones as a statement against police violence. But the line between citizens’ rights and law and order is hard to draw.

In George Floyd Square, a group of local leaders made some headway in establishing public services associated with “the gated community experience,” one leader said. But there was also increased violence, and Atlanta is now being sued after a young girl was killed in an autonomous zone overrun by gangs.

“When police are absent, you understand that the issue is about sovereignty, not just coercion by the police,” says political scientist Vasabjit Banerjee. As the Supreme Court grants the police more power over individuals, the question emerges: “Who is sovereign?” he asks. “And is the state doing its duty by ceding sovereignty to groups?”

When Michael McQuarrie entered the George Floyd Square autonomous zone for the first time last year, he felt as if he was entering a freer, friendlier, and, in some ways, edgier America.

To some, the neighborhood had become the “Free State of George Floyd.” To him and many there, it proved more broadly that a community can not only function, but thrive, without police authority: that physical autonomy empowers citizens.

And then there were the gun shots.

Protesters are creating cop-free autonomous zones as a statement against police violence. But the line between citizens’ rights and law and order is hard to draw.

“Policing in Black and trans communities has been so brutal over 30, 40 years … that a lot of people are just traumatized, and they cannot find relief unless they know there are no cops around,” says Mr. McQuarrie, an Arizona State University sociologist who created a short documentary about the rise of George Floyd Square. “Mind you, [such zones] are very safe in that they are free of police violence. But you still have a lot of armed young people around.”

United States cities have long had unofficial “no-go zones” that are policed by community members instead of officers. But last year, as police cracked down on protesters after the murder of Mr. Floyd, citizen-created autonomous zones appeared in Atlanta; Seattle; New York City; Philadelphia; and Richmond, Virginia.

The takeover of Zucotti Park in New York City during the 2011 Occupy protests set the stage for such zones to be used in direct protest. The 2016 occupation of Oregon’s Malheur National Wildlife Refuge by a group of antigovernment ranchers showed that the desire to seize land as a retort to perceived authoritarianism is not defined by partisanship.

Visitors walk near a sign that reads “Welcome to CHOP,” June 14, 2020, inside what has been named the Capitol Hill Occupied Protest zone in Seattle. Protesters calling for police reform and other demands took over several blocks after officers withdrew from a police station in the area following violent confrontations.

Autonomous zones are often spontaneous, ad hoc, and short-lived. But their increasing prevalence as a means of protest raises legal and ethical questions about the balance between citizen autonomy and the public safety problems that can be unleashed.

The relative success of George Floyd Square, where community leaders negotiated garbage pickup and emergency medical services, contrasts with the gang violence that broke out in Atlanta, where a young girl was shot and killed. In a nation where the Constitution grants citizens inalienable rights, the line between those rights and collapse of law and order is not an easy one to draw.

“When police are absent, you understand that the issue is about sovereignty, not just coercion by the police,” says Vasabjit Banerjee, a political scientist at Mississippi State University.

As the Supreme Court has whittled away at rights against search and seizure, police have been granted more power over individuals. “But who is sovereign?” he asks. “And is the state doing its duty by ceding sovereignty to groups?”

Why zones crop up

Today, one of the largest autonomous zones in the world is Rojava, a sliver of land in northeast Syria that sought to create a democratic local government in 2012 amid civil war. Rojava has not received official recognition by any country. But it has been widely hailed as a model for how areas historically prone to authoritarianism and religious intolerance can find space to overcome those forces.

Writing in The Guardian newspaper in 2019, a group of social leaders worldwide said: “By promoting radically democratic and decentralised self-governance, equity between genders, regenerative agriculture, a justice system based on reconciliation and inclusion of minorities, the Rojava experiment has presented a living example of possibility under the most impossible of circumstances.”

In Minneapolis, George Floyd Square emerged from concerns about policing. It appeared in the aftermath of a police crackdown on protests that had at times grown violent. After one clash in the area, a handmade monument to Mr. Floyd lay in tatters.

“When the police destroyed the memorial, that’s when the barricades went up,” says Mr. McQuarrie. “It wasn’t some sort of planned anarchist occupation. It was a community that was in shock of being brutalized. That’s why they did it.”

That motive is consistent across many such zones. They form when people feel the state is denying them lawful access to public spaces.

“The streets, the sidewalks: These are the spaces where protest is supposed to happen, where dissent is supposed to happen,” says Karen Pita Loor, a professor at Boston University School of Law. “When police engage with people in a violent manner, that [access to the public square] is completely and absolutely gone. So an autonomous zone is often a response to long-standing historical frustration on issues of police brutality.”

The appearance of gang activity in several such zones, however, has complicated the political messaging and endangered occupants and bystanders. A Minneapolis gunshot detection system found that incidents of shots fired near George Floyd Square rose from 33 in 2019 to 700 in 2020.

That’s why autonomous zones in Atlanta, Seattle, and Minneapolis expressed elements of what Michigan State University sociologist Carl Taylor calls the “third city.” These are areas that are controlled and affected “by poverty, violence, crime, drugs, ignorance and illicit enterprise.” In that way, lawless autonomous zones are simply the outgrowth of the perception that law and order is already absent, variable, or inconsistent.

A bullet casing is seen after shots were fired in George Floyd Square on the first anniversary of George Floyd’s death on May 25, 2021, in Minneapolis. The intersection where Mr. Floyd was murdered by a police officer became an autonomous zone, with sanitation and emergency medical services.

“When white men storm the capitol in Michigan and threaten the governor, we’re not calling them gangs. But is that not worse than Bloods and Crips?” says Professor Taylor. “That’s why [some Black people] don’t give a damn, because they don’t live in America as it stands for fairness and justice. I’m not condoning [violent gang] behavior. But we shouldn’t be surprised at what we are seeing.”

More recently, he adds, “there seems to be a disappearance of police services in many places. That leaves communities of innocent people who have nothing to protect them, so they hope a gang will try to protect them. But gangs aren’t professional, and that’s how you end up with innocent babies killed.”

Secoriea Turner is one tragic example. The 8-year-old was riding with her mom in her car in Atlanta when they turned into the burned-out Wendy’s where Rayshard Brooks was fatally shot by police. Men with guns appeared and ordered her to turn around. Shots were fired, killing Secoriea.

A lawsuit filed this month now blames the city of Atlanta and Mayor Keisha Lance Bottoms for her death. The city failed to maintain order, and the crackdown on the zone after Secoriea’s death, they say, only proves it. The Georgia Bureau of Investigation has since tied at least some members of the group to a street gang. The shooters now face life in prison. A similar suit was filed earlier this year in Seattle by a family of a teenager killed by gunfire in Seattle’s autonomous zone.

What worked in Minneapolis

The legal issues are complex. Governments have broad immunity from liability, especially for actions not taken. The lawsuits argue that city officials violated the victims’ 14th Amendment right to equal protection within the jurisdiction of the U.S. government.

But also strong is the evolution of Fourth Amendment rights to be free from unreasonable state searches and seizure.

“When you do these kinds of informal ceding of power, you are getting really deep into citizens’ rights,” says Professor Banerjee of Mississippi State. “Is it like a new form of federalism?”

If it is, then the square in Minneapolis could be counted as a success. Community leaders negotiated for garbage pickup and emergency medical services. It wasn’t as much a new country as an attempt to give the community the kind of autonomy that more affluent Americans can afford.

“I’m trying to give residents the gated community experience,” Marcia Howard, one of the leaders, would often say during conversations at the barricades.

Their political messages had an effect. Minneapolis shifted $8 million of its $179 million police budget toward social services and adopted stricter rules for police engaging citizens during protests. George Floyd Square also made headway in merging stubborn cultural and political divides within the Black community.

“The most noted sort of division in Black politics is between church politics and the street,” says Mr. McQuarrie. “In Minneapolis, they completely bridged that to keep the protest going for over a year.”