What Is Dark Matter? 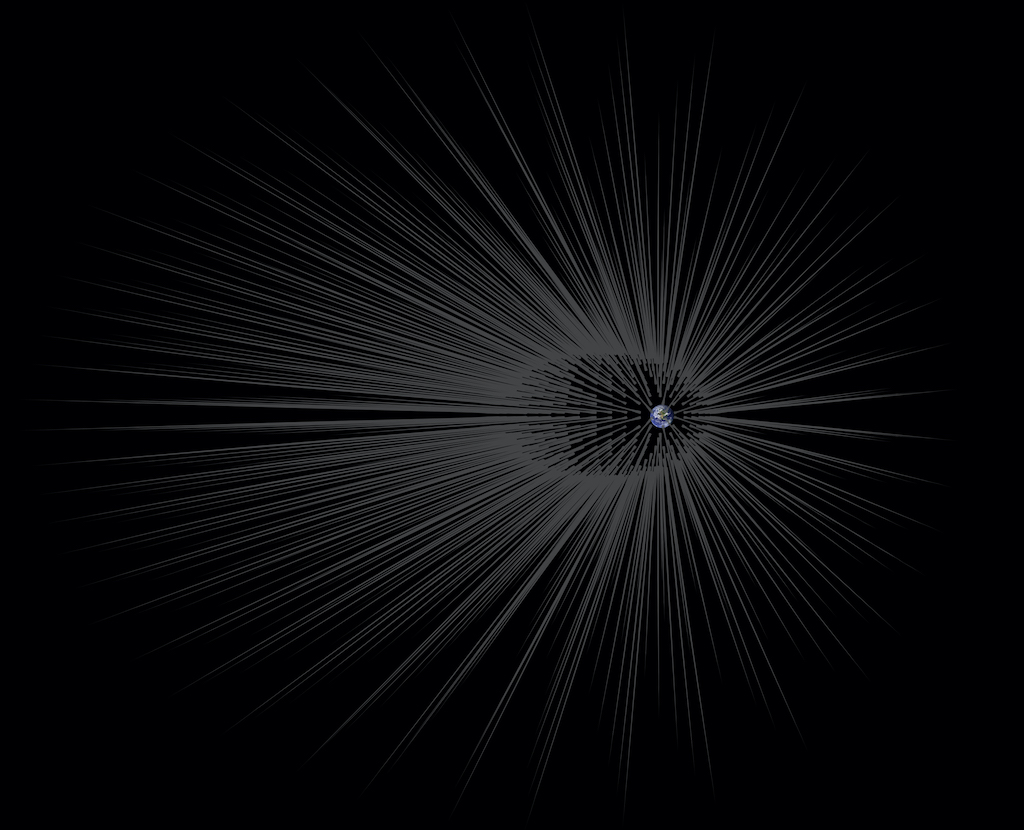 Science |
Dark matter is distributed in the universe in a net-like pattern
(Image credit: NASA/JPL-Caltech)

Over 80% of all matter in the universe is made up of material scientists have never seen. It’s called dark matter and we only assume it exists because without it, the behaviour of stars, planets and galaxies simply wouldn’t make sense. Here is what we know about it, or rather, what we think we know.

What is dark matter and why is it invisible?

Dark matter is completely invisible. It emits no light or energy and thus cannot be detected by conventional sensors and detectors. The key to its elusive nature must lie in its composition, scientists think.

Visible matter, also called baryonic matter, consists of baryons — an overarching name for subatomic particles such as protons, neutrons and electrons. Scientists only speculate what dark matter is made of. It could be composed of baryons but it could also be non-baryonic, that means consisting of different types of particles.

Most scientists think that dark matter is composed of non-baryonic matter. The lead candidate, WIMPS (weakly interacting massive particles), are believed to have ten to a hundred times the mass of a proton, but their weak interactions with “normal” matter make them difficult to detect. Neutralinos, massive hypothetical particles heavier and slower than neutrinos, are the foremost candidate, though they have yet to be spotted.

Sterile neutrinos are another candidate. Neutrinos are particles that don’t make up regular matter. A river of neutrinos streams from the sun, but because they rarely interact with normal matter, they pass through Earth and its inhabitants.

“One of the outstanding questions is whether there is a pattern to the fractions that go into each neutrino species,” Tyce DeYoung, an associate professor of physics and astronomy at Michigan State University and a collaborator on the IceCube neutrino observatory in Antarctica, told Space.com.

The smaller neutral axion and the uncharged photinos — both theoretical particles — are also potential placeholders for dark matter.

There is also such a thing as antimatter, which is not the same as dark matter. Antimatter consists of particles that are essentially the same as visible matter particles but with opposite electrical charges. These particles are called antiprotons and positrons (or antielectrons). When antiparticles meet particles, an explosion ensues that leads to the two types of matter cancelling each other out. Because we live in a universe made of matter, it is obvious that there is not that much antimatter around, otherwise there would be nothing left. Unlike dark matter, physicists can actually manufacture anti-matter in their laboratories.

Why do we think dark matter exists?

But if we cannot see dark matter, how do we know it exists? The answer is gravity, the force exerted by objects made of matter that is proportional to their mass. Since the 1920s, astronomers have hypothesized that the universe must contain more matter than we can see because the gravitational forces that seem to be at play in the universe simply appear stronger than the visible matter alone would account for.

“Motions of the stars tell you how much matter there is,” Pieter van Dokkum, a researcher at Yale University, said in a statement. “They don’t care what form the matter is, they just tell you that it’s there.”

Astronomers examining spiral galaxies in the 1970s expected to see material in the center moving faster than at the outer edges. Instead, they found the stars in both locations traveled at the same velocity, indicating the galaxies contained more mass than could be seen.

Studies of gas within elliptical galaxies also indicated a need for more mass than found in visible objects. Clusters of galaxies would fly apart if the only mass they contained was the mass visible to conventional astronomical measurements.

Different galaxies seem to contain different amounts of dark matter. In 2016, a team led by Van Dokkum found a galaxy called Dragonfly 44, which seems to be composed almost entirely of dark matter. On the other hand, since 2018 astronomers have found several galaxies that seem to lack dark matter altogether.

The force of gravity doesn’t only affect the orbits of stars in galaxies but also the trajectory of light. Famous physicist Albert Einstein showed in the early 20th century that massive objects in the universe bend and distort light due to the force of their gravity. The phenomenon is called gravitational lensing. By studying how light is distorted by galaxy clusters, astronomers have been able to create a map of dark matter in the universe.

A vast majority of the astronomical community today accepts that dark matter exists.

“Several astronomical measurements have corroborated the existence of dark matter, leading to a world-wide effort to observe directly dark matter particle interactions with ordinary matter in extremely sensitive detectors, which would confirm its existence and shed light on its properties,” the Gran Sasso National Laboratory in Italy (LNGS) said in a statement. “However, these interactions are so feeble that they have escaped direct detection up to this point, forcing scientists to build detectors that are more and more sensitive.”

Despite all the evidence pointing towards the existence of dark matter, there is also the possibility that no such thing exists after all and that the laws of gravity describing the motion of objects within the solar system require revision.

Where does dark matter come from?

Dark matter appears to be spread across the cosmos in a net-like pattern, with galaxy clusters forming at the nodes where fibers intersect. By verifying that gravity acts the same both inside and outside our solar system, researchers provide additional evidence for the existence of dark matter. (Things are even more complicated as in addition to dark matter there also appears to be dark energy, an invisible force responsible for the expansion of the universe that acts against gravity.)

But where does dark matter come from? The obvious answer is that we don’t know. But there are a few theories. A study published in December 2021 in The Astrophysical Journal argues that dark matter might be concentrated in black holes, the powerful gates to nothing that due to the extreme force of their gravity devour everything in their vicinity. As such, dark matter would have been created in the Big Bang together with all other constituting elements of the universe as we see it today.

Stellar remnants such as white dwarfs and neutron stars are also thought to contain high amounts of dark matter, and so are the so-called brown dwarfs, failed stars that didn’t accumulate enough material to kick-start nuclear fusion in their cores.

How do scientists study dark matter?

Since we can’t see dark matter, can we actually study it? There are two approaches to learning more about this mysterious stuff. Astronomers study the distribution of dark matter in the universe by looking at the clustering of material and the motion of objects in the universe. Particle physicists, on the other hand, are on a quest to detect the fundamental particles making up dark matter.

An experiment mounted on the International Space Station called the Alpha Magnetic Spectrometer (AMS) detects antimatter in cosmic rays. Since 2011, it has been hit by more than 100 billion cosmic rays, providing fascinating insights into the composition of particles traversing the universe.

“We have measured an excess of positrons [the antimatter counterpart to an electron], and this excess can come from dark matter,” Samuel Ting, AMS lead scientist and a Nobel laureate with the Massachusetts Institute of Technology, told Space.com. “But at this moment, we still need more data to make sure it is from dark matter and not from some strange astrophysics sources. That will require us to run a few more years.”

Back on Earth, beneath a mountain in Italy, the LNGS’s XENON1Tis hunting for signs of interactions after WIMPs collide with xenon atoms.

“A new phase in the race to detect dark matter with ultra-low background massive detectors on Earth has just begun with XENON1T,” project spokesperson Elena Aprile, a professor at Columbia University, said in a statement. “We are proud to be at the forefront of the race with this amazing detector, the first of its kind.”

The Large Underground Xenon dark-matter experiment (LUX), seated in a gold mine in South Dakota, has also been hunting for signs of WIMP and xenon interactions. But so far, the instrument hasn’t revealed the mysterious matter.

“Though a positive signal would have been welcome, nature was not so kind!” Cham Ghag, a physicist at University College London and collaborator on LUX, said in a statement. “Nonetheless, a null result is significant as it changes the landscape of the field by constraining models for what dark matter could be beyond anything that existed previously.”

The IceCube Neutrino Observatory, an experiment buried under the frozen surface of Antarctica, is hunting for the hypothetical sterile neutrinos. Sterile neutrinos only interact with regular matter through gravity, making it a strong candidate for dark matter.

Experiments aiming to detect elusive dark matter particles are also conducted in the powerful particle colliders at the European Organization for Nuclear Research (CERN) in Switzerland.

In 2014, NASA’s Fermi Gamma-ray Space Telescope made maps of the heart of our galaxy, the Milky Way, in gamma-ray light, revealing an excess of gamma-ray emissions extending from its core.

“The signal we found cannot be explained by currently proposed alternatives and is in close agreement with the predictions of very simple dark matter models,” lead author Dan Hooper, an astrophysicist at Fermilab in Illinois, told Space.com.

The excess can be explained by annihilations of dark matter particles with a mass between 31 and 40 billion electron volts, researchers said. The result by itself isn’t enough to be considered a smoking gun for dark matter. Additional data from other observing projects or direct-detection experiments would be required to validate the interpretation.

The James Webb Space Telescope, launched after 30 years of development on Dec. 25 2021, is also expected to contribute to the hunt for the elusive substance. With its infrared eyes able to see to the beginning of time, the telescope of the century won’t be able to see dark matter directly, but through observing the evolution of galaxies since the earliest stages of the universe, it is expected to provide insights that have not been possible before.

You can read more about dark matter on the website of the U.S. Fermi National Accelerator Laboratory (Fermilab), which runs high-energy experiments in cutting edge particle colliders with the goal of discovering particles that would fill the gaps in our understanding of the universe. The European Organization for Nuclear Research (CERN), the largest particle physics laboratory in the world, is also on a quest to find missing dark matter particles. NASA discusses the difference between dark matter and dark energy in this article.

This article was update on Jan 28, 2022 by Space.com Senior Writer Tereza Pultarova.

Nola Taylor Tillman is a contributing writer for Space.com. She loves all things space and astronomy-related, and enjoys the opportunity to learn more. She has a Bachelor’s degree in English and Astrophysics from Agnes Scott college and served as an intern at Sky & Telescope magazine. In her free time, she homeschools her four children. Follow her on Twitter at @NolaTRedd

See Mars shine very close to the crescent moon in the pre-dawn sky Saturday. Here’s where to look.
SpaceX now aims to launch an Earth-observation satellite for Italy on Saturday (yes, you can watch it live)