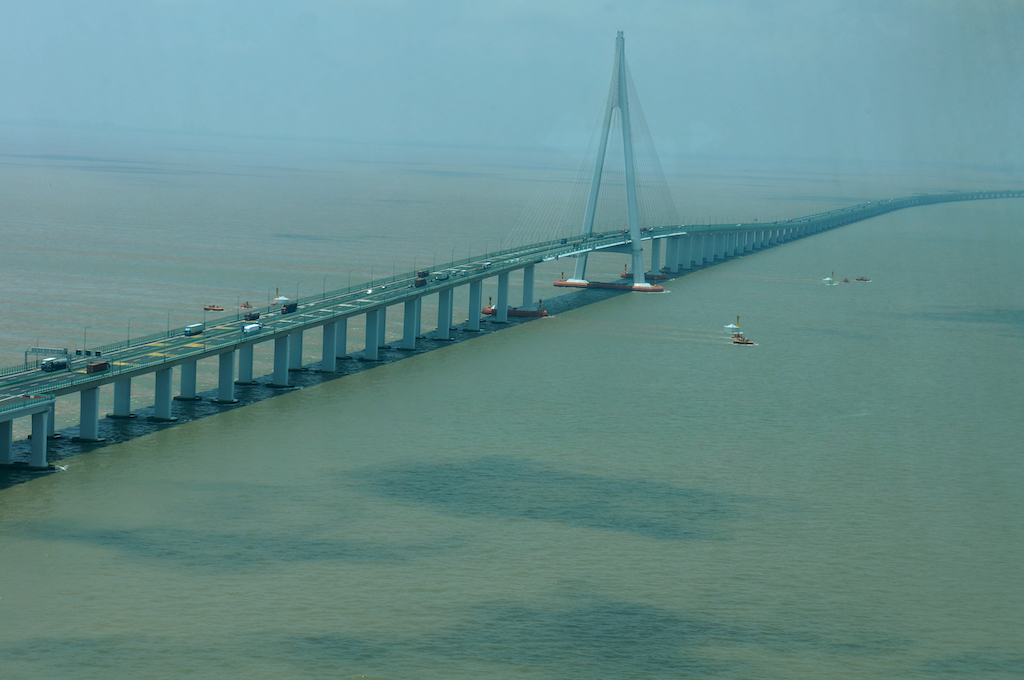 The world’s longest bridge is the Danyang–Kunshan Grand Bridge in China, part of the Beijing-Shanghai High-Speed Railway, according to Encyclopaedia Britannica. The bridge, which opened in June 2011, spans 102.4 miles (165 kilometers).

China constructed the Danyang–Kunshan Grand Bridge in just four years, employing 10,000 workers, at a cost of about $8.5 million, according to Encyclopaedia Britannica. It crosses low rice paddies, part of the Yangtze River Delta, with just a few miles of the bridge actually crossing the open water of Yangcheng Lake in Suzhou. The bridge averages about 100 feet (31 meters) off the ground.

Related: Da Vinci’s forgotten design for the longest bridge in the world

The majority of Danyang–Kunshan Grand Bridge’s length follows the Yangtze River, at a distance varying between 5 and 50 miles (8 and 80 kilometers) south of it. The section that crosses Yangcheng Lake in Suzhou is 5.6 miles (9 kilometers) long and is supported by 2,000 pillars, Engineering Clicks reported.

What is the second longest bridge?

The second longest bridge in the world is the Changhua-Kaohsiung Viaduct in Taiwan, according to BBC Science Focus. This 97.8 mile (157.3 kilometer) bridge was built in 2007 to resist seismic activity during earthquakes, according to Encyclopaedia Britannica.

A viaduct is a specific type of long bridge, usually consisting of a series of arches or columns. The bridge is part of the Taiwan High Speed Rail and stretches from Zuoying in Kaohsiung and Baguashan in Chang-hua County.

The world’s longest road bridge is the 34-mile (55-km) long Bang Na expressway in Thailand, which was constructed in 2000, according to Guinness World Records. This road bridge is a six-lane elevated highway that crosses only a bit of water, the Bang Pakong River.

Upon construction of the massive bridge, the Bang Na temporarily became the longest bridge in the world, according to the database Transport Research International Documentation (TRID). This database documents the total area of the bridge’s surface at 20,400,000 square feet (1,900,000 square meters).

The world’s longest continuous bridge over water is the Lake Pontchartrain Causeway in southern Louisiana. The causeway is actually two parallel bridges, with the longer of the two measuring close to 24 miles (39 km), according to Encyclopaedia Britannica. The bridges are supported by 9,500 concrete pilings, according to the American Concrete Institute.

Louisiana’s famous bridge faced a challenger in 2011, when China claimed that its Jiaozhou Bay Bridge was the longest spanning water. Guinness World Records decided to split the title into two parts, stating that the 26.4-mile (42.5-km) long Jiaozhou Bay Bridge is the longest bridge over water in aggregate, while the Pontchartrain is the longest continuous bridge, according to World Atlas. In Jiaozhou, land bridges and sea tunnels make up parts of the overall structure.