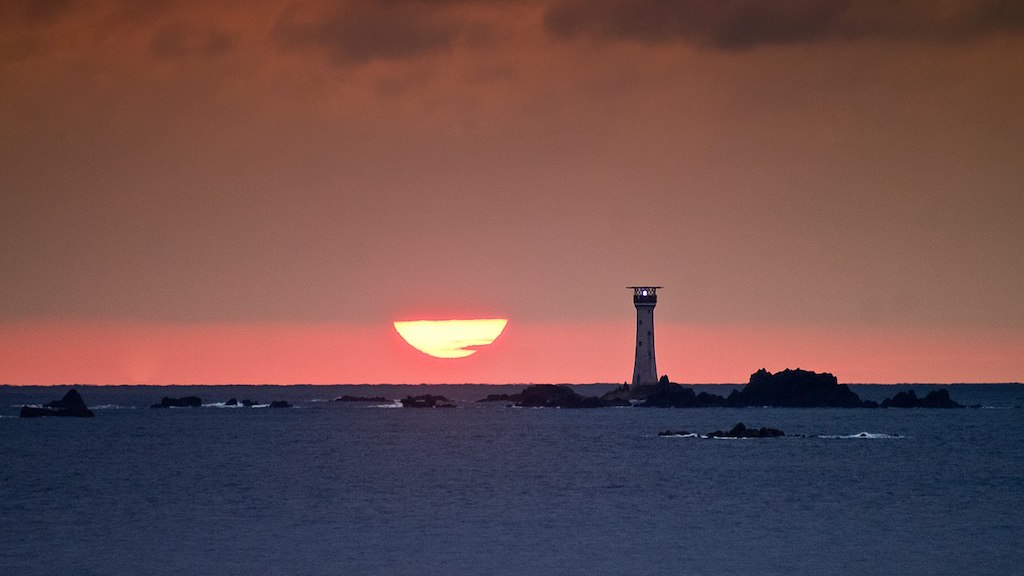 The sun sets behind the Hanois Lighthouse during the winter solstice, Dec. 21, 2010.
(Image credit: Wikicommons/Angus MacRae)

The Winter Solstice, or the December Solstice, is the point at which the path of the sun in the sky is farthest south. At the Winter Solstice, the sun travels the shortest path through the sky resulting in the day of the year with the least sunlight and therefore, the longest night.

In the lead up to the Winter Solstice, the days become shorter and shorter, then on the evening the solstice  —  in the Northern Hemisphere occurs annually on the 21st or 22nd of December —  winter begins, according to NASA.

From then onwards the days become increasingly long leading up to the Summer Solstice, or the June Solstice, and the longest day of the year.

This year the Winter Solstice will occur on Dec. 21. During the day, the Northern Hemisphere will have just 8 hours and 46 minutes of daylight. Then at 10:19 pm, Earth’s axis will be titled in such a way that the North Pole of Earth faces the furthest away from the sun it will reach.

To be precise, the Winter Solstice marks what is known as the “astronomical winter” —  but don’t worry, this doesn’t mean it will be colder than any other winter. The moniker is simply adopted to distinguish it from the meteorological winter.

The Winter Solstice: Earth’s journey around the sun

According to Britannica, Earth’s axis has an around 23-degree tilt and without this, not only would our planet not have a Winter Solstice, it would not have seasons at all. The axial tilt of the Earth means that as our planet journeys around the sun different areas of the planet experience varying degrees of sunlight.

Without the axial tilt, the sun would remain directly about the Equator, and everywhere on the planet would receive the same amount of light the year through.

During the Winter Solstice, the North Pole is tilted at around 23.4 degrees away from the sun, meaning its rays move southward from the Equator.

To picture this tilt, imagine skewering the Earth on a massive pole from the Northern Hemisphere, through the center of the planet, and down to the Southern Hemisphere.

Visualizing this pole, it quickly becomes obvious that as the Northern pole is angled away from our star, the Southern pole must be angled towards it.

That means Winter Solstice accounts for half of our planet’s solstices. The other two are the Summer Solstices, and you may be unsurprised to learn that the four solstices are interconnected.

The Winter Solstice: North and South

Today we are aware of the astronomical events that lead to the solstices and their effect on the planet and we can imagine cosmic poles that impale our planet. But for our ancestors, these days had almost supernatural significance, meaning not only were they marked by both festivals and celebrations, they often birthed dark folkloric tales.

The Winter Solstice: History and folklore

The significance of the Winter Solstice to our ancestors was probably a result of the fact it marked the lengthening of days, leading to its reputation as a time of rebirth.

Because of its significance, there are simply too many Winter Solstice celebrations and festivals to list. The first that springs to the minds of many is the Christian celebration of Christmas. But, the birth of Jesus Christ was not always celebrated around the Winter Solstice. The adoption of Dec. 25 was pioneered in 336 A.D. by the Roman Emperor Constantine.

Historians speculate this was done by the Emperor as a move to weaken established pagan celebrations that occurred around the Winter Solstice. The date wouldn’t be accepted by the Eastern Empire for around another 500 years, and Christmas wouldn’t become a major Christian festival until the 9th Century.

The remnants of these overshadowed pagan traditions remain in our Christmas celebrations, for instance and according to the free dictionary, the Scandinavian Winter Solstice festival of the Feast of Juul involved the burning of Juul logs to symbolize the returning of the sun, giving rise to the Christmas tradition of Yule Logs.

The Jewish festival of Hanukkah, which stated by Britannica, begins on Kislev 25 usually falling in December and lasting for eight days, is also a winter celebration likely influenced by prior Winter Solstice celebrations.

With little understanding of the Earth-sun system and what astronomical bodies were, many of our predecessor’s Winter Solstice celebrations marked ritual celebrations of the death and rebirth or even the theft and return of the sun.

One such tale is the Finnish myth that centers around Louhi, a powerful and evil witch that ruled over the mythical northern realm of Pohjola. In the myth, Louhi steals the sun and the moon away, holding them captive inside a mountain, causing the waning daylight leading up to the Winter Solstice.

Of course, the superstitious aspects of the Winter Solstice have diminished as our knowledge of the solar system and astronomy has increased. Now we use heating systems and electric lights to hold the cold and dark of winter back and give little thought to the risk of sun-theft.

Yet, fortunately, some traditions remain. Festivals around the Winter Solstice still mark a time to gather and celebrate even after all of our advances and the vanquishing of superstition by science.