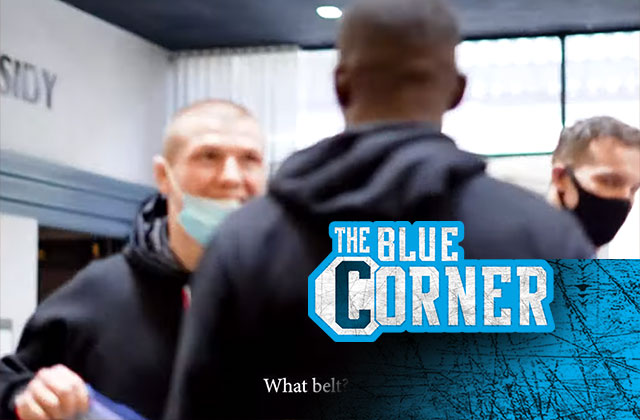 UFC middleweight champion Israel Adesanya and Marvin Vettori do not like each other. That much was made clear during a heated joint interview with Michael Bisping this past weekend on the UFC Fight Night 189 broadcast.

It made you wonder what would happen if they crossed paths during UFC 263 fight week. Well, we found out Tuesday.

In a video captured by EMG Access, Adesanya and Vettori encountered each other for the first time at the host hotel in Glendale, Ariz. Check this out (via YouTube):

Adesanya: “You got a Gucci belt, don’t you?”

Adesanya: “Yeah, you should get one.’

Vettori: “I’m about to get mine. I’m getting yours, my friend.”

Adesanya: “You’re not getting mine. I’m not your friend.”

While it wasn’t quite to the level of “altercation” that the video title suggests, words were exchanged. And although it was brief, anyone in that room watching probably felt the tension as Adesanya and Vettori stood inches from each other.

Here’s how Adesanya described the encounter to The Mac Life:

“I waved at him, and he looked petrified. He kept on looking back (at me from a distance). I told Steve, ‘Nah, I’m not gonna do nothing to him. He’s not gonna do sh*t either.’ And then I got my COVID test, and I went to go check in, and he happened to be there. I walked right up to him, and I shook his hand like I did with (Paulo) Costa. People think this is a game. It’s not a game. This is tactics of war. I understand this game, warfare. So I went and shook his hand, same thing like I said in Vegas. He was all smiley. And you know why? He didn’t have his crew with him. If it was just me by myself and he had his mob with him, I would’ve kept the same energy. But he would’ve switched his energy and [grunts]. He knew security was there, his crew was there, [grunts], some sh*t for the camera, but I’m a civil guy. When the time for war comes, yeah, I’ll take that.”

One thing’s for sure: Can’t wait until they lock the door behind them on Saturday night.

The Blue Corner is MMA Junkie’s blog space. We don’t take it overly serious, and neither should you. If you come complaining to us that something you read here is not hard-hitting news, expect to have the previous sentence repeated in ALL CAPS.