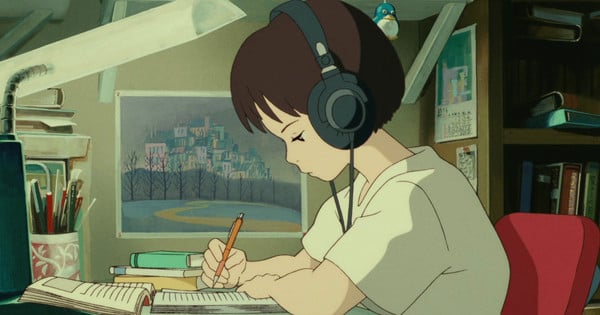 When you ask people what their favorite Ghibli film is, there are a few usual suspects. Spirited Away, Princess Mononoke, My Neighbor Totoro. Almost definitely something directed by Hayao Miyazaki. But one film in the Ghibli catalog that I think deserves more recognition is 1995’s Whisper of the Heart. It tells the story about the blooming romance between a pair of middle school students, Shizuku and Seiji, as they inspire each other to advance in their artistic passions. Whisper of the Heart is a very low-key story compared to most of the other films in Ghibli’s catalog. The fate of the human race isn’t at stake like in Nausicaä. There’s no magic or giant mechs like Castle in the Sky. Whisper of the Heart takes place in a contemporary (at the time) Japanese city. The most fantastical parts of the film are a couple of brief imagination sequences from Shizuku’s novel. The stakes are 100% emotional—and that’s something special. The emotional intimacy portrayed by this movie is so powerful that it was able to make a marriage proposal feel appropriate despite the two characters not doing so much as hugging until the final seconds of the film. I can’t think of any team other than Ghibli that could pull that off. h7wjkpi27k

Whisper of the Heart is a distillation of Ghibli’s very essence. The movie creates a majestic verisimilitude in a way that only Ghibli can. The atmosphere in this movie is so alive; Whisper of the Heart constantly, yet subtly, shows us that our characters are part of a living, breathing world full of countless other people living their own lives: nearly every scene will remind you of this by having the characters navigate through car traffic or crowds of pedestrians. The film has a heavy use of the “Ma” (emptiness) that the studio is known for, as seen in the frequent, long scenes of Shizuku traversing the city. For the most part, they don’t serve any purpose in moving the plot forward, but they’re essential in letting the audience ruminate on the previous scene. And we know that as we’re absorbing the events and emotions in this movie, so is Shizuku. These moments create a kind of immersion that very few filmmakers can accomplish. This dedication to making a more lived-in world doesn’t stop with the moving parts. It’s even in the background art. A bad habit of set design in both live-action and animation is creating spaces that are devoid of signs that human beings actually inhabit them. They’re often too tidy, too plain; comparing them to our own homes, they could even be called sterile. But Whisper of the Heart goes above and beyond in this regard. Shizuku’s home is a marvel. To pick only one detail, look at how dominated by literature the apartment is: piles and piles of books and newspapers in varying levels of organization. It provides great indirect characterization for the family. Shizuku’s father is a librarian, her mother a graduate student, her sister a college student. The set design is very effective in showing us what kind of upbringing would create a girl so infatuated with books as Shizuku.

So much of what makes this movie special are the little things. Characters exchanging hellos and excuse mes as they cross paths on the apartment stairs. Yuko revealing that she and her father aren’t speaking. Shizuka’s father lighting up a cigarette only to immediately put it out at his wife’s protest. In isolation, these don’t mean much; they don’t move the plot along, elaborate on the theme or contribute to any meaningful character development. They’re things that most screenwriting classes would consider extraneous and deduct points for. But taken in as a whole, they elevate Whisper of the Heart to new heights. They help create a world that we can not only believe in, but desperately want to be a part of. Despite being only one of several directors at Studio Ghibli, most people speak of Ghibli and Hayao Miyazaki interchangeably. To most, Ghibli is Miyazaki, and Miyazaki is Ghibli. It wouldn’t be surprising if some of that sentiment existed among the studio’s staff itself. As Miyazaki aged and went in and out of retirement multiple times, the thought on everyone’s mind has been who could possibly fill his shoes once he’s gone for good. Not just as the leading voice of Studio Ghibli, but as the most prolific auteur anime feature film director. Fans have bandied about the title of “The Next Miyazaki” for younger directors such as Mamouru Hosoda and Makoto Shinkai, but it seems that in recent years, fewer feel the need to use that label. Ghibli itself has also had a long history of trying to find someone who could take over for Miyazaki, but no one has ever hit the mark. It’s understandable, as Miyazaki’s baton is a heavy one to carry. But watching Whisper of the Heart reveals that “The Next Miyazaki” actually did exist. And he directed this film.

Whisper of the Heart was directed by Yoshifumi Kondō. Before Ghibli, Kondo was already an anime veteran with decades of experience under his belt with projects such as Lupin III and Future Boy Conan. In his career with Ghibli, he worked as an animator, animation director, concept artist, and character designer on several of Ghibli’s releases, including Kiki’s Delivery Service and Grave of the Fireflies. Whisper of the Heart was his one and only run as director of a feature-length film.

Kondo’s untimely death at the age of 47 was a powerful inflection point in anime history. The man who was the favorite to succeed Hayao Miyazaki and Isao Takahata was no more. His death heavily affected Miyazaki and was likely a large factor in his decision to retire for the first time in 1998. Unfortunately we’ll never know what kinds of films Kondo would have given the world had he lived. We’ll never know how the trajectory of Studio Ghibli would have been with Kondo in the head seat. But we can still take the time to appreciate his one and only feature film. If there was ever a single movie to watch to understand Studio Ghibli, it would be Whisper of the Heart.