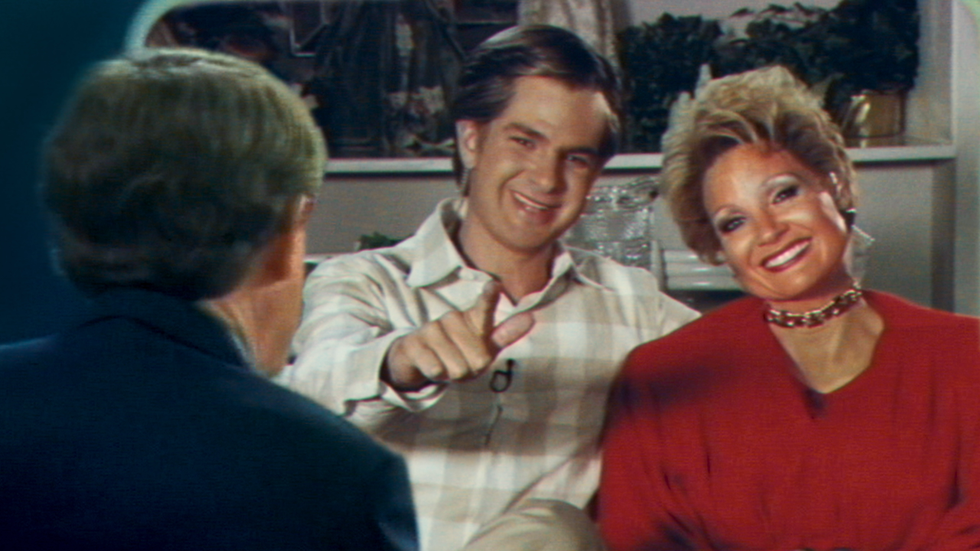 To the untrained eye, Jessica Chastain’s character in The Eyes of Tammy Faye might look clownish or otherworldly. But for those around in the 80s, the caked on makeup and high-pitched accent will be a familiar, if not divisive, reminder of the real woman, Tammy Faye Messner. Due out in theaters on September 17, Chastain will star alongside Andrew Garfield in The Eyes of Tammy Faye, playing one half of the Bakkers—a televangelist couple that became embroiled in a web of fraud and conspiracy.

But the true story of Tammy Faye Messner (née Bakker) is layered as the makeup she’s infamous for. The film itself looks to be expansive, to say the least. Chastain will follow Messner’s story from the early days of meeting her husband Jim in college, all the way through at least her second marriage to Roe Messner, well into the 90s. The trailer offers brief glimpses into the complex personality of Messner, ranging from her blind allegiance to her husband Jim, all the way to the compassion she had for the LGBTQ community and HIV/AIDS patients at the height of the crisis.

But to fully appreciate whatever is to come via The Eyes of Tammy Faye (based off the acclaimed 2000 documentary of the same name), you have to know who Messner is.

Tammy Faye and her husband Jim Bakker married in 1961. Soon after, they began a ministry. Jim would preach sermons, while Tammy Faye became known for her singing and musical accompaniment to the production. In that same era, the couple met Pat Robertson, who led the Christian Broadcasting Network. Together, they developed a puppet ministry that ran for nearly a decade. They were also founding members of the popular Christian-based talk series, The 700 Club.

But it was their next endeavor that cemented the Bakkers as televangelist mainstays. In 1974, they founded The PTL (Praise the Lord) Club that carried the televised production of Jim and Tammy Faye’s preaching and evangelizing. They helped repopularize the “prosperity gospel,” which suggests that by giving your money to evangelical organizations, God would reward them with more financial and physical wealth. At the height of PTL, the Bakkers were bringing in hundreds of millions of dollars in revenue.

The Rise and Fall of the Bakkers

At the height of their success, the Bakkers were corralling massive amounts of donations from viewers. At one point, they used a hefty sum to create Heritage USA, a Christian-based theme park that operated for about eleven years before closing in 1989. But in the mid-80s, Messner’s own approach to Christianity was at odds with the creed of other televangelists, as well as Christians. In 1985, Messner had a now-famous interview segment on PTL where she interviewed Steve Pieters, a gay minister who was an AIDS survivor.

She approached the conversation with compassion and understanding, calling on viewers and other Christians to extend the same compassion to LGBTQ people—particularly those who were suffering from the AIDS epidemic.

Around the same time, PTL was coming up against its own reckoning. Staring in the early 80s, allegations that money was being redirected within the company started to surface. Bakker would tell audiences that donations were going to mission trips, while other documents showed that it was going to personal use and other projects to bolster the company’s reach. The IRS eventually discovered that over a million dollars in donations were misused. Allegations of corruption within the company were compounded in 1987 when church secretary Jessica Hahn came forward and alleged that Bakker had raped her, along with fellow co-host, John Wesley Fletcher.

Throughout the controversy, Messner remained with Bakker, who was eventually charged with fraud and conspiracy and sentenced to 45 years in prison. In 1992, Messner changed course and filed for divorce from Bakker. He was paroled in 1994.

Following her divorce, Messner went on to marry property developer Roe Messner. Within three years, he too was convicted of fraud, which dated back to before he and Tammy Faye were married. As Tammy Faye continued on, she became a pop culture figure, straddling the line between an evangelical audience and an LGBTQ community who had adopted her as a gay icon.

In her later years, Messner was diagnosed with colon cancer. She suffered from the disease for years, but continued to surface in the public eye, starring in a season of The Surreal Life and penning two autobiographies. Eventually, Messner succumbed to her disease in 2007, dying in her home in Kansas City, Missouri.