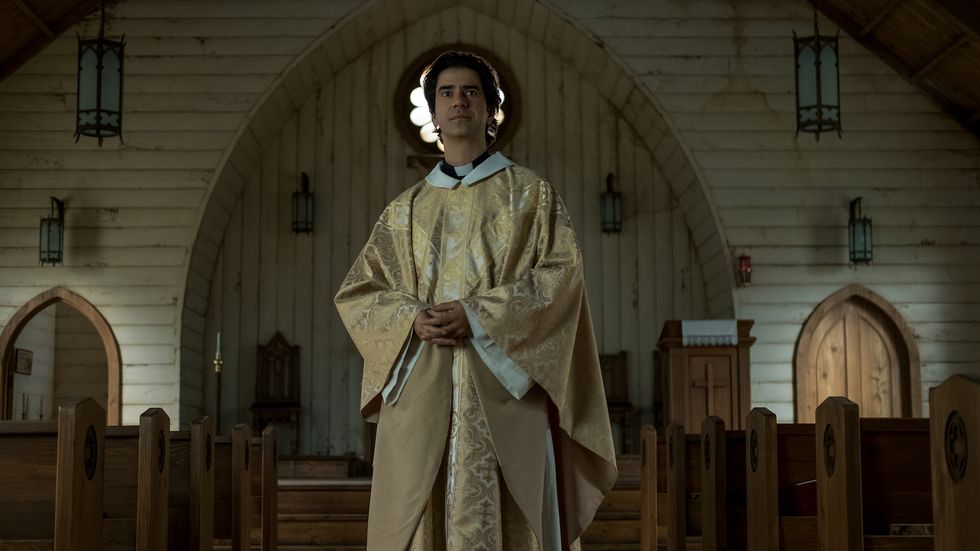 For those new to the Mike Flanagan canon, welcome to the most terrifying club on earth. The filmmaker and show-runner has an expansive history of terrifying work, both on and off of Netflix—recent titles like The Haunting of Hill House and The Haunting of Bly Manor may ring a ball—and his latest outing, Midnight Mass, keys into that same eery energy.

Premiering just in time for Spooky Season™, Midnight Mass delves into the haunting world of religious fanaticism and supernatural frights. Set in a small, coastal town called Crockett Island, everything about this struggling and isolated settlement begins to go awry when the return of a downtrodden local man coincides with the arrival of a new, enigmatic priest. But you know that, right? Because you’ve watched the series? If not, leave now! Go watch the series. Spoilers ahead, this is your final warning.

The unfortunate news for those who have watched the series, coming here for news of another run of episodes, is that there is almost certainly not going to be a second season of Midnight Mass. But that doesn’t mean that there’s not more Mike Flanagan-fare to get caught up on (plus, news of another project on the horizon).

Read on for what to expect from the creator, and why Midnight MassSeason Two is unlikely (at best).

Why No Second Season of Midnight Mass?

Midnight Mass, for all intents and purposes, is the third installment of an ongoing set of limited series that Flanagan has released on Netflix. Each of the series has run with a handful of episodes, all with free-standing stories. That means unless something changes majorly, Midnight Mass will follow suit with its own story, divorced from any series that precedes or follows it.

The cool thing about Flanagan’s projects though is that he’s one of those show-runners that often pulls from his recurring cabal of performers. In some ways, that makes his series (and films) all feel connected, despite their disjointed plots. Rahul Kohli, Kate Siegel, James Flanagan? All holdovers from past projects Flanagan has worked on.

What Else Can I Watch from Flanagan?

If you’re vibing with the limited series format, then you definitely have to revisit his first two limited series for Netflix: The Haunting of Hill House, which kicked things off back in 2018, and The Haunting of Bly Manor, which came out in 2020. The order isn’t important, as the stories don’t connect, so tackle as you see fit. As for films, a lot of Flanagan’s movies are also available on Netflix, too. Check out Gerald’s Game, Hush, Before I Wake, or Ouija: Origin of Evil.

I’ve Already Watched All of Flanagan’s Canon (The Flanagon, If You Will)…

Well look at you! In that case, hold tight. Though not a second season, Flanagan’s upcoming project for 2022 is titled The Midnight Club, and it will feature the return of the bizarrely haunting Samantha Sloyan, Zach Gilford, and Igby Rigney. The series will follow seven terminally ill young adults living in a hospice facility. They come together at midnight to tell scary stories, and one night, they agree that whichever of them dies first will communicate with the others beyond the grave. And it seems that one of them makes good on their word.