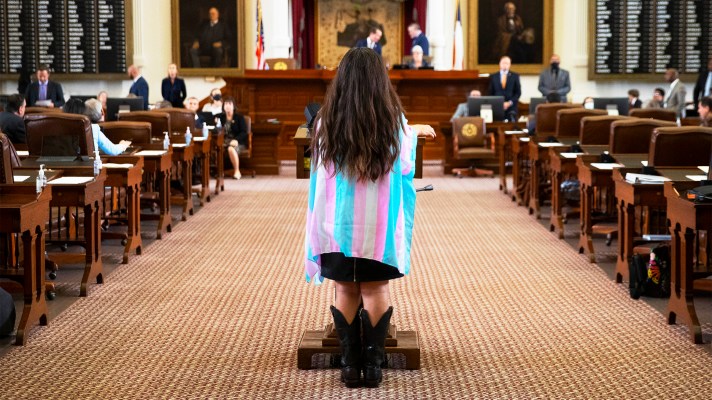 In 2016, North Carolina passed its infamous “bathroom bill”, which prevented transgender people from using public bathrooms that aligned with their gender identity. Today, anti-trans legislation is taking aim at children. Dozens of states have introduced bills limiting transgender students’ participation on school sports teams that match their gender identity. Thirteen states, all Republican-leaning, have passed such bills in the last two years, turning an issue that affects less than 1 percent of the country’s youth into the latest battle in the culture wars.

Using data from the American Civil Liberties Union, Freedom for All Americans and the Human Rights Campaign,

These bills were shared with me via email.

” data-footnote-id=”1″ href=”http://fivethirtyeight.com/#fn-1″>1 as well as additional bills found in the course of my research, I identified 40 bills introduced since January 2021 that seek to restrict how gender and gender identity are taught at schools. Bills ranged from requiring parental consent or notification before teaching these subjects to limiting these topics for students in certain grades to outright prohibiting learning about gender identity.

We limited these bills to only those that specifically mentioned gender or gender identity; bills that sought to restrict teaching related to sexuality or sexual orientation were excluded from this tally.

Moreover, underscoring just how closely this movement is linked to the push around banning critical race theory — an academic legal framework that asserts that racism is systemic and embedded in many American institutions — in the classroom, 13 of these bills also included language restricting how schools can teach about race and racism. Several bills targeted critical race theory directly, despite the fact that critical race theory is not taught in K-12 schools.

Limiting or banning classroom discussions is “going to have just an enormous chilling effect to prohibit teachers from being able to really have any kind of conversation whatsoever … effectively, they’re not going to be able to talk about LGBTQ people at all,” said Cathryn Oakley, the state legislative director for the Human Rights Campaign.

Reading the text of these bills is like a Cliffs Notes summary of all the ways in which education has become a wedge issue. Of the 13 bills that limit both how gender and gender identity and race and racism are talked about in the classroom, three proposed bills — in Rhode Island,

” data-footnote-id=”5″ href=”http://fivethirtyeight.com/#fn-5″>5 — explicitly ban schools from teaching The New York Times’s 1619 Project, which has long been a target of right-wing attacks in schools. There is also an Oklahoma bill

” data-footnote-id=”6″ href=”http://fivethirtyeight.com/#fn-6″>6 that proposes to ban books in public school libraries “that make as their primary subject the study of lesbian, gay, bisexual, or transgender issues.”

These fights of what can — and can’t — be taught in schools aren’t new. “Schools have been a site of many political battles and many political interventions,” said Adrienne Dixson, a professor of education at the University of Illinois Urbana-Champaign, citing the historical examples of Brown v. Board of Education (a landmark Supreme Court case that banned racial segregation in public schools) and legal battles over providing bilingual education. And as FiveThirtyEight’s Alex Samuels and Kaleigh Rogers explained last year, conservatives have long used schools as a battleground for culture war issues over everything from evolution to sex education to racial equality.

Conservatives’ attacks on schools ratcheted up during the Trump administration. Following the murder of George Floyd and protests for racial justice in the summer of 2020, then-President Donald Trump tried to control how the federal government talked about issues of race, banning federal agencies and contractors from conducting racial sensitivity training in an executive order issued in September 2020. The federal government can’t actually dictate what’s taught in public schools, but Trump also threatened to pull funding from some schools that used the 1619 Project in its curriculum.

While Trump ultimately wasn’t able to ban what was taught in schools, the rhetoric in his executive order was significant in that it helped “legitimize the discontent that his base had, and has probably had for a while as it relates to racial equity,” according to Dixson. Moreover, the language in his executive order has cropped up repeatedly in the anti-trans bills I’ve studied.

In fact, many of these bills are part of a coordinated legislative effort. Oakley told me that Promise to America’s Children, an anti-LGBTQ coalition, was the source of many of these anti-trans bills. And one of the organizations behind Promise to America’s Children, the Heritage Foundation, has created model legislation opposing the “tenets” of critical race theory being taught in K-12 classrooms.

As of March 15, 154 anti-trans bills that limit access to health care, sports, bathrooms and education have been introduced in state legislatures across the country, according to NBC News. This is already more than the 153 such bills introduced in 2021. More broadly, the number of anti-LGBTQ bills has also grown from 41 in 2018 to 238 in just the first few months of 2022. (Some states with Democratic-controlled legislatures are fighting back. Connecticut, for instance, became the first state to respond to this sort of legislative action this week with a bill containing a pro-trans provision, proposing a “safe-state law” that would guarantee protections for transgender individuals leaving other states.)

Republicans are using tools beyond legislation to attack trans rights. In February, Texas Gov. Greg Abbott instructed the state’s Department of Family and Protective Services to investigate reports of gender-affirming health care for trans children as child abuse — a move that left many parents of trans children in Texas feeling “frantic,” according to Emma, the mother of an eight-year-old trans girl from Austin. (Emma preferred to use a pseudonym out of privacy concerns.) “I go between feeling a rage and just sheer panic,” she said, adding that she knows six families who are leaving the state over this.

Only one of these bills, Florida’s Parental Rights in Education Act,

” data-footnote-id=”7″ href=”http://fivethirtyeight.com/#fn-7″>7 has been signed into law so far. But even if many of these bills aren’t passed, they can still create an atmosphere that is hostile to trans people. Often, too, it falls to trans kids to fight back.

One student who knows this particularly well is 18-year-old Amira Pierotti, a senior at James Madison Memorial High School in Madison, Wisconsin, who helped rewrite their local health education curricula twice to make it more LGBTQ-inclusive — Pierotti said the original curriculum had “no LGBT+ representation, nothing on safe sex, nothing on consent, very little on sexual assault.” For the last two years, they say they’ve also been involved  in a lawsuit brought on by a local conservative advocacy group over whether staff can call students by different names or pronouns, without parental consent. (Several student clubs at local high schools, including one where Pierotti is a member, intervened as defendants in the lawsuit.)

It’s not just this lawsuit, either — Pierotti also helped organize against a bill introduced by Wisconsin Republicans last September that would have required schools to give parents notice before providing any instruction related to sexual orientation, gender identity or gender expression. One of Pierotti’s friends, Cameron Craig, a 16-year-old sophomore, stayed up the night before and skipped school the next day to testify against the bill. Craig told me that they were motivated to do this because it was important to them that legislators understand what their experience of being a trans student was like.

The bill ultimately failed, but at that point, a similar bill had already passed both chambers of the Wisconsin legislature. And while that bill was later vetoed by Democratic Gov. Tony Evers, when trans rights at school are up for debate, “it’s an invitation toward discrimination,” said Stephen Russell, a sociologist at the University of Texas at Austin who studies the health and well-being of LGBTQ+ adolescents. For some trans kids, the difference between a supportive and an unsupportive school environment can be a matter of life or death. According to my analysis of data from a late 2020 poll from the advocacy group The Trevor Project, trans and nonbinary youth who felt that their school was not a gender-affirming space were almost 30 percent more likely to have attempted suicide in the last year.

For Craig, the loss of school as a potential safe outlet for self-expression especially makes them concerned for friends who are closeted at home because they don’t have a supportive family. “School is their safe space right now, where we can be kind of openly LGBTQ a good amount of the time,” said Craig. “[T]hat being taken away from them would be really, absolutely devastating.”

But with the number of anti-trans bills growing, school might not be a safe space for trans kids anytime soon.

Jean Yi is a politics intern at FiveThirtyEight. @Jean_Yi_