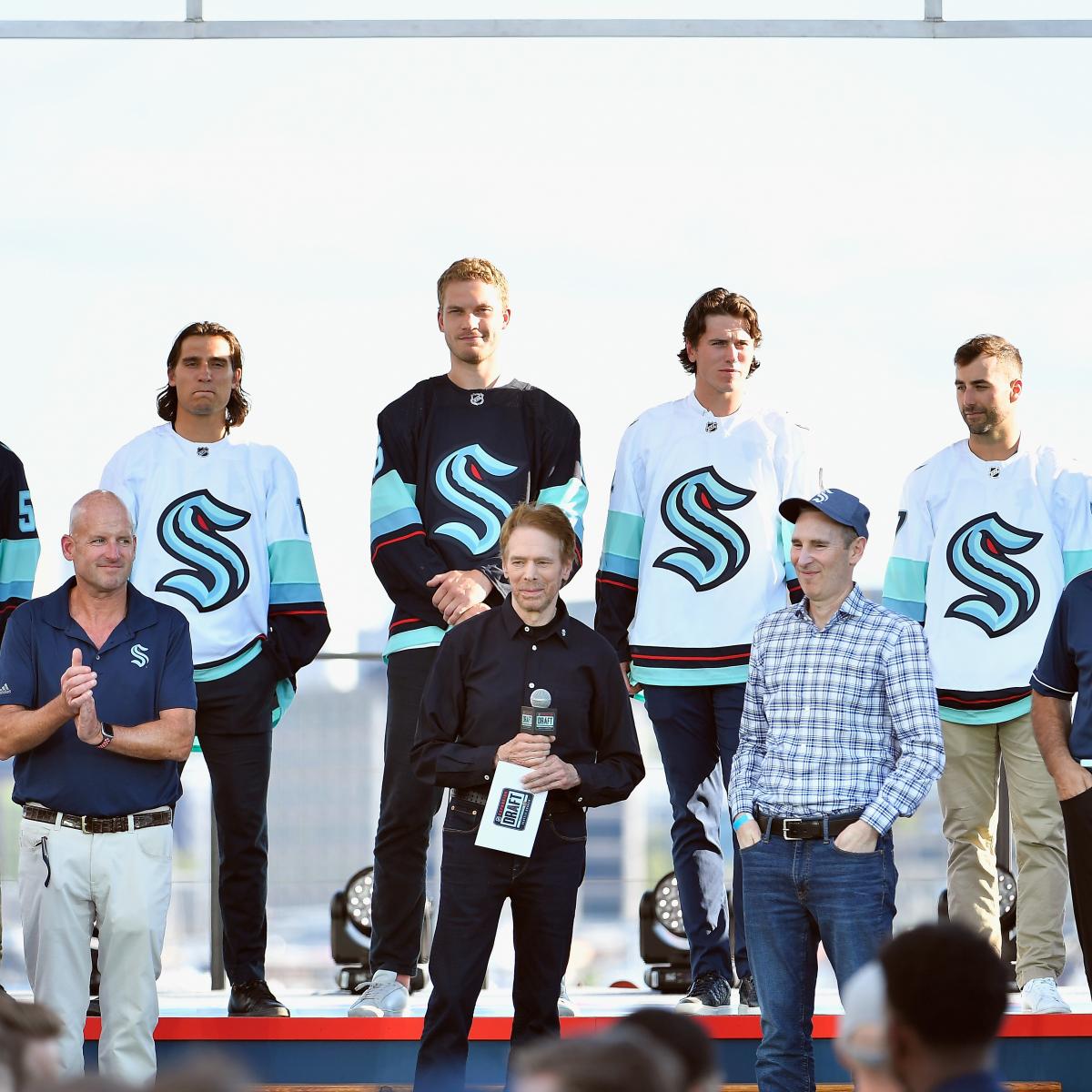 Following months of waiting and speculation, the Seattle Kraken finally have a full roster. They made their selections during the 2021 NHL expansion draft on Wednesday evening.

The unveiling of the roster was anticlimactic, as almost all the picks were leaked in the media beforehand. Many of their choices are unheralded depth veterans or promising youngsters. However, Seattle did select some recognizable talent such as Mark Giordano and Jordan Eberle.

Time will tell whether the Kraken become an immediate contender like the Vegas Golden Knights or require several seasons to build into a perennial playoff club. Some of the players selected could become trade candidates over the course of this offseason. Management could also bolster the roster when the free-agent market opens on July 28.

The ripples from this expansion draft will be felt around the league this offseason. Here’s a look at the winners and losers. All salary info is from CapFriendly. Feel free to weigh in with your thoughts in the comments section.

The Montreal Canadiens raised eyebrows when they announced Carey Price waived his no-movement clause to be exposed in the expansion draft. That sparked considerable conjecture over whether the Kraken would select the 33-year-old goaltender.

Price volunteered to waive the clause to enable the Canadiens to protect backup Jake Allen, and general manager Marc Bergevin bet that the Kraken would be put off by the netminder’s $10.5 million annual salary-cap hit over the next five years. An additional deterrent were reports of Price’s impending visit to a doctor regarding possible treatment for ongoing hip and knee ailments.

The Kraken passed on Price, but they considered selecting him, as general manager Ron Francis told Renaud Lavoie of TVASports. The opportunity to land one of the league’s top goalies, fresh off his stellar performance backstopping the underdog Canadiens to the 2021 Stanley Cup Final, had to be tempting. He would have immediately become the Kraken’s franchise player, just as netminder Marc-Andre Fleury did with the Vegas Golden Knights in 2017.

Despite Price’s age, contract and injury concerns, he remains the cornerstone of the Canadiens. Exposing him was a calculated risk on Bergevin’s part, but it would have paid off one way or the other.

Had the Kraken taken Price, it would have freed up considerable cap room for Bergevin to put toward a short-term replacement and address other roster needs. With Price staying in Montreal, their goaltending tandem remains intact for the foreseeable future, providing the opportunity for another deep postseason run.

NHL fans were abuzz over the number of stars left unprotected when the player protection lists were released on July 18 by the league.

Topping the list were Price and St. Louis Blues right wing Vladimir Tarasenko. The star goaltender’s availability was discussed in the previous slide. Tarasenko, meanwhile, had been shopped by the Blues in the trade market.

Colorado Avalanche captain Gabriel Landeskog and Carolina Hurricanes defenseman Dougie Hamilton were also exposed. Both are due to become unrestricted free agents on July 28. Per TSN’s insiders, Kraken management spoke with both players’ representatives during their exclusive negotiation window of July 18-21.

As the calendar flipped to Wednesday, it seemed like the Kraken would select or sign one of those stars. Excitement was growing among hockey fans on social media. The stage was set for what should have been a suspenseful official reveal.

The draft, however, was a dud. All the Kraken’s selections were leaked to the media, who dutifully reported them on their websites and via social media hours before the event. None of the exposed stars were among those chosen.

One would have thought the league had learned its lesson during the Vegas Golden Knights’ draft in 2017 as most of their selections were also leaked ahead of their draft. The lack of oversight this time sucked a lot of the emotion and drama out of a much-hyped event on the NHL calendar.

Though the Kraken were exempt from the expansion draft roster freeze, much-anticipated side deals didn’t materialize during the event. Perhaps they have other moves in the works that will be revealed once the roster freeze is lifted at 1 p.m. ET on Thursday.

How many of you predicted the Kraken would select Gavin Bayreuther from the Columbus Blue Jackets and Carsen Twarynski from the Philadelphia Flyers? Be honest.

If your reply was “who?,” you’re not alone. The pair were among a handful of players who didn’t make the cut in most expansion mock drafts and predictions, including ours. However, the Kraken believed they had sufficient value to make them part of their inaugural roster.

Bayreuther has a total of 28 NHL games under his belt with the Blue Jackets and Dallas Stars since 2018-19. The 27-year-old defenseman was slated to become an unrestricted free agent on July 28, but he and the Kraken may have agreed to a new contract to guarantee his selection.

Twarynski, 23, is a restricted free agent, but the Kraken retain his rights if he remains unsigned on July 28. The left winger totaled 22 games with the Flyers since 2019-20. NBC Sports Philadelphia’s Jordan Hall speculates Kraken head coach Dave Hakstol may have had input here. Twarynski impressed Hakstol when he was coach of the Flyers in 2018, though the young forward didn’t make their final roster that year.

Other surprising selections included Will Borgen from the Buffalo Sabres, John Quenneville from the Chicago Blackhawks, Nathan Bastian from the New Jersey Devils and Alexander True from the San Jose Sharks.

They could have roles to play in the Kraken’s lineup or in their minor league system. They could also end up as trade bait if management decides to go shopping for other assets.

Imagine you are a player on a club that just won the Stanley Cup, such as Yanni Gourde. Or a player on a Cup contender like Jordan Eberle or Joonas Donskoi.

Now imagine your team left you unprotected in an expansion draft. You end up going from a champion or contender to a brand-new team that might not make the playoffs for the next couple of years.

That’s the adjustment Gourde, Eberle and Donskoi face after being selected by the Kraken. They could be facing an express elevator from the penthouse to the basement. This could take some time for them to process the sudden change to their fortunes.

This isn’t like becoming an unrestricted free agent, when you have the opportunity to sign with a club of your choosing. It’s not like being traded when you could be moved to a team with some potential or, in Gourde’s and Eberle’s cases, to a club for whom you would waive your no-trade clauses to join. These guys had no say in this situation.

The Kraken could follow in the footsteps of the Vegas Golden Knights, who marched to the Stanley Cup Final in their first season. No one, however, predicted they would even qualify for the playoffs when the puck dropped that season. Just because they enjoyed unprecedented success for an expansion team doesn’t mean the Kraken will share that fate.

Gourde, Eberle and Donskoi are professionals, of course, so they will undoubtedly try to make the most of the situation. They could look forward to the challenge, going on to become team leaders and invaluable core players during the Kraken’s early years. Then again, things could go poorly and they could end up playing elsewhere before the 2021-22 campaign.

A solid defense corps was behind the Vegas Golden Knights’ successful first season. The Kraken seem to be following that template for their initial roster. It’s a good mix of veterans and youth with size and a variety of skills and experience.

Leading the group is Mark Giordano. The former captain of the Calgary Flames won the James Norris Memorial Trophy in 2018-19. The 37-year-old remains among the league’s upper echelon of defensemen. He will bring years of leadership and experience to the Kraken blue line.

Vince Dunn is heading into his fifth NHL season and won the Stanley Cup with the St. Louis Blues in 2018-19. The 24-year-old is an adept puck-mover with the potential to become a first-pairing, left-side rearguard.

Adam Larsson and Jamie Oleksiak bring plenty of size and shutdown skills. The 6’3″, 208-pound Larsson is a 10-year NHL veteran who skated with the New Jersey Devils and Edmonton Oilers in a top-four role. Oleksiak spent the past nine seasons between the Dallas Stars and Pittsburgh Penguins. He’s an imposing figure at 6’7″ and 255 pounds.

The Kraken also brought in some promising defenders in Will Borgen from the Buffalo Sabres, Dennis Cholowski from the Detroit Red Wings, brothers Cale and Hadyn Fleury from the Montreal Canadiens and Anaheim Ducks, respectively, and Jeremy Lauzon from the Boston Bruins. All are over six-feet tall with varying degrees of skills and potential.

Other big defensemen of note include the 6’5″, 233-pound Kurtis MacDermid from the Los Angeles Kings and 6’5″, 211-pound Carson Soucy from the Minnesota Wild. Both play grinding, physical styles that should make life miserable for opposing forwards.

Having signed Chris Driedger and selected Vitek Vanecek and Jason Daccord, the Kraken head into next season with a propitious but still inexperienced group of goaltenders. The defense in front of them, however, should ease their burden next season.

Seattle has what appears to be a solid defense corps with plenty of potential. However, the same cannot be said for its scoring punch. Based on their selections, the Kraken will have a difficult time finding the back of the net on most nights next season.

Jordan Eberle is the only true top-six forward. The 31-year-old former New York Islanders right winger has reached at least 40 points eight times in his 11 NHL seasons. Versatile center Yanni Gourde was a middle-six forward on a deep Tampa Bay Lightning roster. The 29-year-old has tallied 48 or more points twice in his six NHL seasons.

The Kraken also brought in Calle Jarnkrok from the Nashville Predators, Joonas Donskoi from the Colorado Avalanche, Jared McCann from the Toronto Maple Leafs and Brandon Tanev from the Pittsburgh Penguins. They all have reputations as solid checking-line forwards who can chip in offensively. Not one, however, has ever scored 20 goals or 40 points in the NHL.

Ovechkin, however, is expected to re-sign with the Capitals, according to Tarik El-Bashir of The Athletic. They spoke with Landeskog, per The Athletic’s Pierre LeBrun, but nothing came of it. Tarasenko, Voracek and Van Riemsdyk carried contracts that were perhaps too rich for the Kraken’s blood.

Perhaps Kraken general manager Ron Francis has some moves up his sleeve in the trade market to boost his offense. He could also pursue some scorers when the free-agent market opens on July 28.

With the salary cap for 2021-22 remaining at $81.5 million, teams with salary-cap space stand the best chance to improve their rosters during the offseason. They can make competitive bids for the top unrestricted free-agent talent and can also target cap-strapped teams willing to trade quality players in cost-cutting trades.

Sportsnet’s Eric Engels quoted Francis as saying that cap space is “extremely, extremely valuable” in this environment. Given his selections, he certainly followed his own advice.

Following the completion of the expansion draft, the Kraken have a projected $52.5 million invested in 19 players for 2021-22. That leaves them with $28.95 million in cap space.

Defensemen Vince Dunn, Will Borgen, Dennis Cholowski, and Cale Fleury are restricted free agents. So are forwards Carsen Twarynski, Kole Lind and Alexander True. Blueliner Gavin Bayreuther and forward John Quenneville are due to become unrestricted free agents. Most, perhaps all could be re-signed. Center Morgan Geekie and goaltender Joey Daccord are on two-way contracts and considered to be non-roster.

Even with several players still to sign, the Kraken are well-positioned to make a significant move and take on a salaried star in this summer’s trade and free-agent markets. That flexibility means their current roster could have a different look when the puck drops on their first-ever NHL game in October.