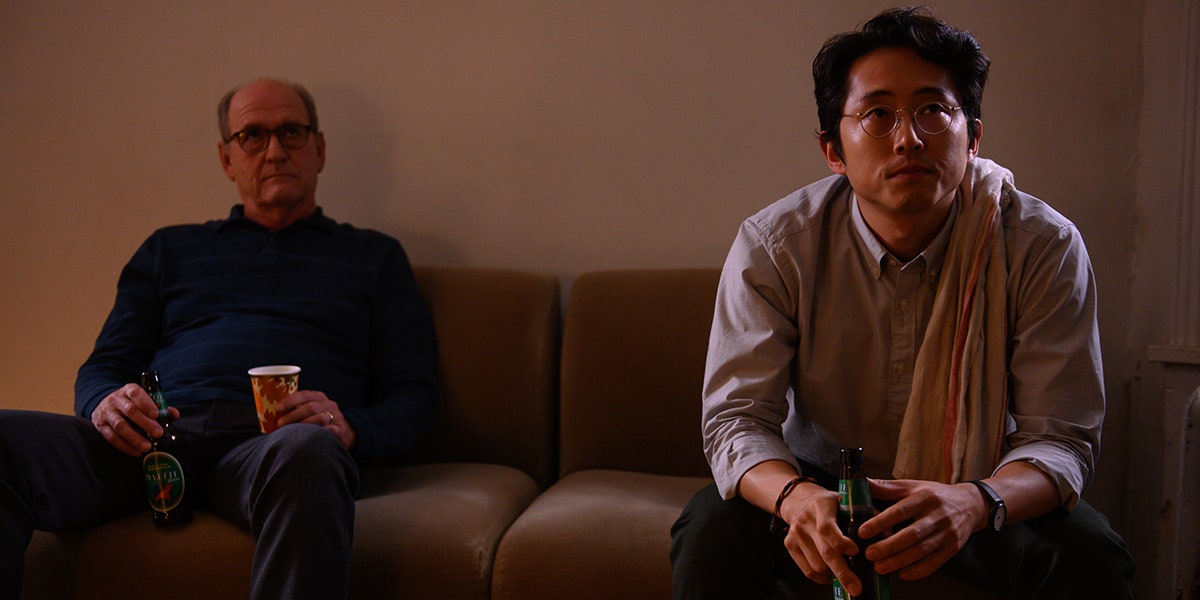 What a terribly familiar feeling it is: the suspicion, or even the palpable sensation, that something sinister is slouching toward us. Some rot or ruin or cataclysm stalking us as we make our way through these finite lives of ours. That niggling worry has, of course, become especially potent of late. Not just during COVID times, but in the whole sweep of the modern information age, when the imminent threats come, myriad, insisting themselves into our minds from so many directions.

That sense of impending doom is what gave Stephen Karam’s 2015 play The Humans, a Pulitzer finalist, such a bracing charge. Karam has now transposed that work into film form, the result of which premiered here at the Toronto International Film Festival on Sunday. Karam makes an auspicious directorial debut, one that captures all the tense, rattling mood of his stage horror while giving it a new, decidedly cinematic shape.

The Humans is about nothing simpler or huger than a family spending Thanksgiving together. Brigid (Beanie Feldstein) and her boyfriend, Richard (Steven Yeun), have moved into a shabby duplex in New York City’s Chinatown, and have invited Brigid’s family over to warm the house. Mom Deirdre (Jayne Houdyshell, reprising her Tony-winning role) and dad Erik (Richard Jenkins) have brought grandma Momo (June Squibb) with them from Scranton, while Brigid’s sister, Aimee (Amy Schumer), has traveled up from Philadelphia. Their rambling crosstalk flows just as naturally as it did on stage—perhaps even more so. In the intimate environs that Karam has finely wrought, these characters can be quieter, do more with asides and mutterings than is possible in theater.

We can also more fully see and appreciate the texture of this faded apartment: the bubbles of paint on the walls; the black buildup around pipes; the windows streaked with years of schmutz; the ratty, dungeon-like kitchen. It’s a real nightmare, this apartment, which is to say it’s an entirely accurate rendition of a Manhattan home that two young people without much money might live in.

And then there is the noise, thuds coming from the apartment upstairs that Brigid and Richard wave away, but grow ever menacing as The Humans unfolds. Is it actually just an old lady banging around up there? Or is it a reckoning, the inevitable darkness that awaits all of us finally descending on this average family, coming to put an end to all their bickering and affection, their grief and their dreams?

That is the great question of The Humans, one poised with elegant, unnerving restraint by Karam and his cast. What The Humans is really about is not any one particular danger, but instead the constant gnawing of the world, the way it slowly erodes our lives until we are all rendered, essentially, into nothing. There is also a chill of a specifically American panic, born of a depressed economy and the lingering wound of September 11th. But there is nothing didactically “Here’s How We Live Now” about Karam’s writing; he is far more interested in psychological and emotional tenor than he is in delineating anything concrete.

What happens in The Humans is basically that these characters yammer on as dinner is prepared, picking at one another’s familiar sore spots and learning of troubling new life developments that arrive not with shock and melodrama, but with a sagging, weary acceptance of everything’s entropy. The bond of the family, the importance of having something steady to return to for comfort and meaning, is referenced over and over as the family goes around the table saying what they are thankful for that year. But the presence of Momo, lost to dementia and murmuring either nonsense or prophecy, reminds them, and us, that even that is fleeting. The center cannot hold, because perhaps there never was a center.

Amid all this existential dread, Karam manages many moments of keenly observed humor. Exchanges between these closely bonded people (and poor outsider Richard) sound startlingly like real life, as if Karam has been listening in on so many private conversations at so many family gatherings. Each actor handles that truth and nuance adeptly. Houdyshell is as striking and sad and achingly, well, human as she was on stage. Jenkins is a sturdy counterpart, credibly playing a Boomer dad as both passive and stubbornly principled. Feldstein and Schumer, not exactly known for this kind of bare-bones drama, blend in with ease, as does Yeun, whose rumpled perpetual grad student is aptly representative of so many men drifting through the city.

The most arresting thing about The Humans is how it blends its discursive verité with the interruptions of haunted-house terror. All of this scary stuff, these clangs and thumps and doors creaking open, might just be the noise of the city, the complement to the clamor made by all these petty, perfectly relatable people. Or, yes, there could actually be some malevolent force loping, climbing, plummeting at them—and at us, too.