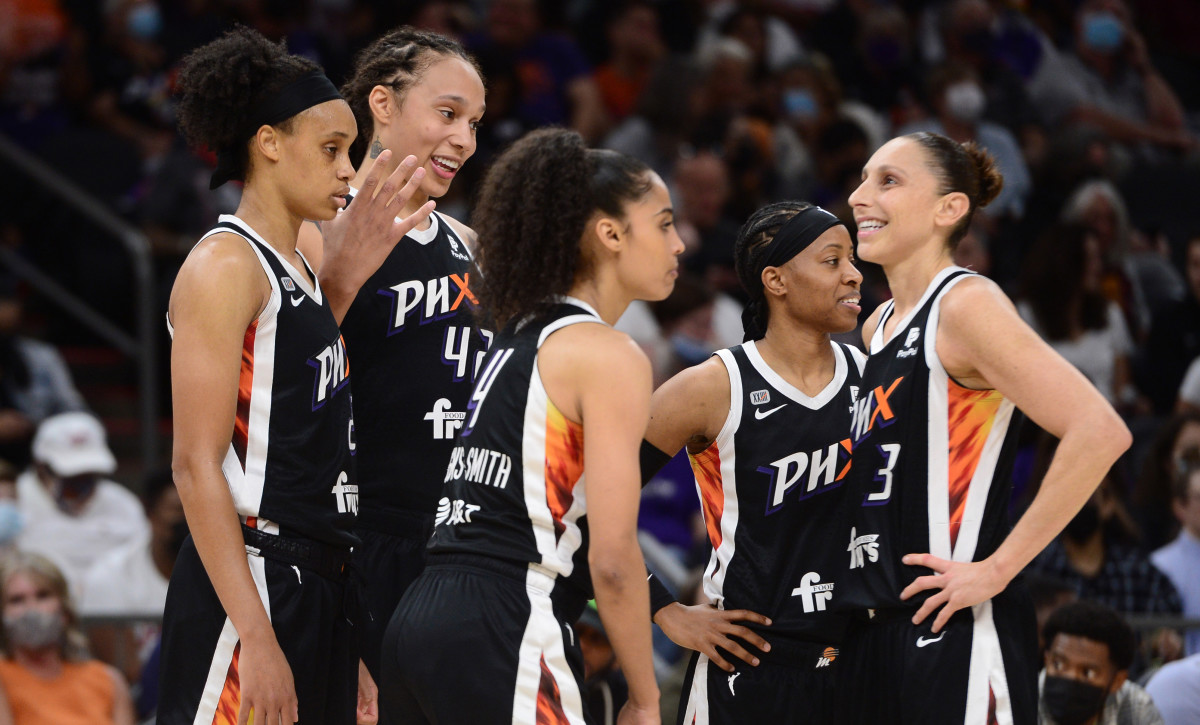 PHOENIX — As Diana Taurasi and Brittney Griner walked off the Footprint Center floor for perhaps the final time this season, two of the Mercury’s Big Three found a former teammate, Shay Murphy, a key reserve on the franchise’s 2014 WNBA title-winning team. As the trio posed, basking in the euphoria of Phoenix’s 91—86 overtime win over Chicago on Wednesday night, Murphy held up the championship ring on her right hand. Griner pointed directly at it and smiled, both acknowledging her past accomplishment and motioning like she needed another one. It’s a prospect that seemed unlikely for much of the night, but remains fully possible with the series now level at one game apiece.

Griner tied a playoff career-high with 29 points and hauled in nine rebounds in the victory. Taurasi scored 20 points, with all but two coming in the second half and overtime. Skylar Diggins-Smith shot just 27% from the field, but recorded a career-high 13 assists and added 13 points. For the Sky, guards Courtney Vandersloot and Allie Quiqley scored 20 and 19 points, respectively. Forward Kahleah Copper notched 15 points and finished with a joint team-high nine rebounds. Here are three thoughts about Phoenix’s Game 2 overtime victory.

In their Game 1 blowout loss, the Mercury received just 18 points from all those not named Griner, Taurasi and Diggins-Smith. In Game 2, however, Phoenix’s role players played an instrumental part in eventually leveling the series. Sophie Cunningham returned to action after missing the end of Phoenix’s the last several games, hitting three threes, much to the delight of the home crowd. Shey Peddy, known more often for her tenacious defense, finished the win with 10 points and five assists. Brianna Turner recorded nine points, eight rebounds, three steals and two blocks.

“What she does for us will never show up on [the box score] but the only reason we’re here is because of her, and we all know that on our team, coaching staff, the people around this team,” Taurasi said.

The Sky’s multitude of weapons proved overwhelming in Game 1. But how Phoenix’s supporting cast plays in the remainder of the series could make a major difference in determining its eventual outcome.

Despite the Loss, Chicago’s Wings Still Slashed Through Phoenix’s Defense

For much of the night, there appeared to be an ease with which the Sky generated offense, especially going toward the rim. In the end, they finished Game 2 with 50 points in the paint, not only as a function of solid play from forward Candace Parker and center Azura Stevens, but also their talented wings. Copper, who led all non-centers in the 2021 WNBA regular season with 6.2 shot attempts per game from within five feet of the basket, was on the attack early in the contest, recording 10 first-half points. While she ended with just 15, both Vandersloot and Quiqley picked up much of the scoring slack in the second half.

Still, despite the offensive aggression, the Sky finished with only four free throw attempts.

“Call it what you will, I’ve never seen that ratio in a league game before,” coach James Wade said. “You score that many points in the paint, that means you’re attacking the basket, and you shoot four free throws.”

Taurasi said afterward that they played a multitude of different defensive coverages to try and contain Chicago’s guards, including switching, hedging and trapping.

“It was a lot of hard work from everyone on our team,” Taurasi said. “I mean, [Vandersloot] is a handful, [Quigley], Candace is just playing at such a high level. Then you think about Copper and what she’s done in these playoffs and then Azura and [Diamond DeShields]. There’s a lot of things that we really have to make sure every possession we’re locked in, and today we did that enough, enough times.”

The Mercury will certainly have their hands full again as the series shifts to Chicago.

Taurasi Closes Out Game 2 as Everyone Has Come to Expect

Taurasi played far from her best game on Wednesday night. She had just two first-half points and ended the night shooting just 30% from three. While she took better care of the basketball than she did in Game 1 (she finished Game 2 with three turnovers compared to the six she had in Game 1, a performance she described as “pathetic”), Taurasi failed to record an assist in a game for the first time all season.

Nevertheless, she closed Wednesday’s win in a manner which many have come to expect. She opened overtime by recording a four-point play, and finished with eight points in the game’s extra session. The Sky, by comparison, scored just seven as a team.

“She is just a player that loves those moments,” coach Sandy Brondello said. “There’s no fear, even when she’s so tired.”

Added Griner: “You know when the time is going down, when it’s crunch time, we have all the faith in the world that [Taurasi] is going to make those shots and make big plays for us. She does it year in, year out.”