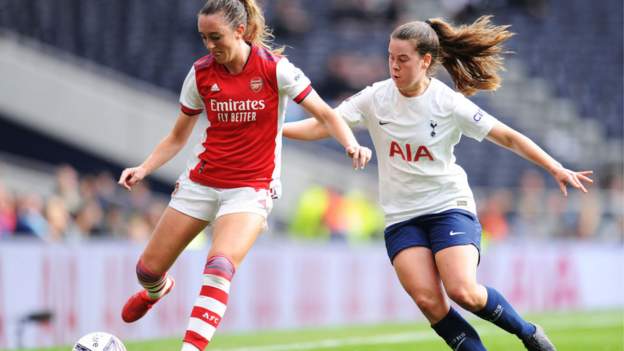 The 2020-21 Women’s FA Cup returns with the quarter-finals on Wednesday, four months after the fifth round was played.

The competition, which started in December 2020, had to be paused mid-season due to the Covid-19 pandemic and was last played without crowds in May.

The quarter-finals, semi-finals and final were pushed back to this season, with lots having changed during the break, including a whole summer of transfer activity and the new Women’s Super League campaign getting under way.

The quarter-final tie between north London rivals Arsenal and Tottenham will be broadcast live on BBC Four (19:15 BST).

Charlton Athletic, the only Championship side left in the competition, face a trip to Brighton & Hove Albion (19:00 BST).

What happened in the fifth round?

The competition started in December 2020 but was paused mid-season due to the coronavirus pandemic.

The last game to be played was Chelsea’s 3-0 win over Everton on 20 May.

Having secured the Championship title and promotion to the WSL, Leicester City knocked out Manchester United in manager Casey Stoney’s last match in charge, Brighton & Hove Albion put six past third-tier Huddersfield Town and Spurs needed extra time to get past Championship side Sheffield United.

Birmingham saw off Southampton in a 3-2 win and Charlton Athletic edged out Blackburn Rovers to become the only Championship side left in the competition.

A competition impacted by Covid-19, there has been plenty of change since the fifth round ties took place in May.

Last time a full round of FA Cup fixtures was played Chelsea were in the Champions League final and had just been crowned WSL champions, Leicester weren’t even a top-flight side and games were being played behind closed doors.

Changes on the pitch see the eight teams involved in the 2020-21 quarter-finals play with different squads to last season.

Last time an FA Cup game was played Arsenal’s Tobin Heath was still a Manchester United player, Lauren James had yet to sign for Chelsea, Manchester City were without Jamaica’s record goalscorer Khadija ‘Bunny’ Shaw and the Gunners, Birmingham and United all had different managers in the dugout.

When are the semi-finals and final?

The semi-finals will be played on Sunday, 31 October with the showpiece final at Wembley Stadium taking place on Sunday 5 December – more than six months after it was originally scheduled.

The final, which had originally been scheduled for 22 May, will celebrate the competition’s 50th anniversary.