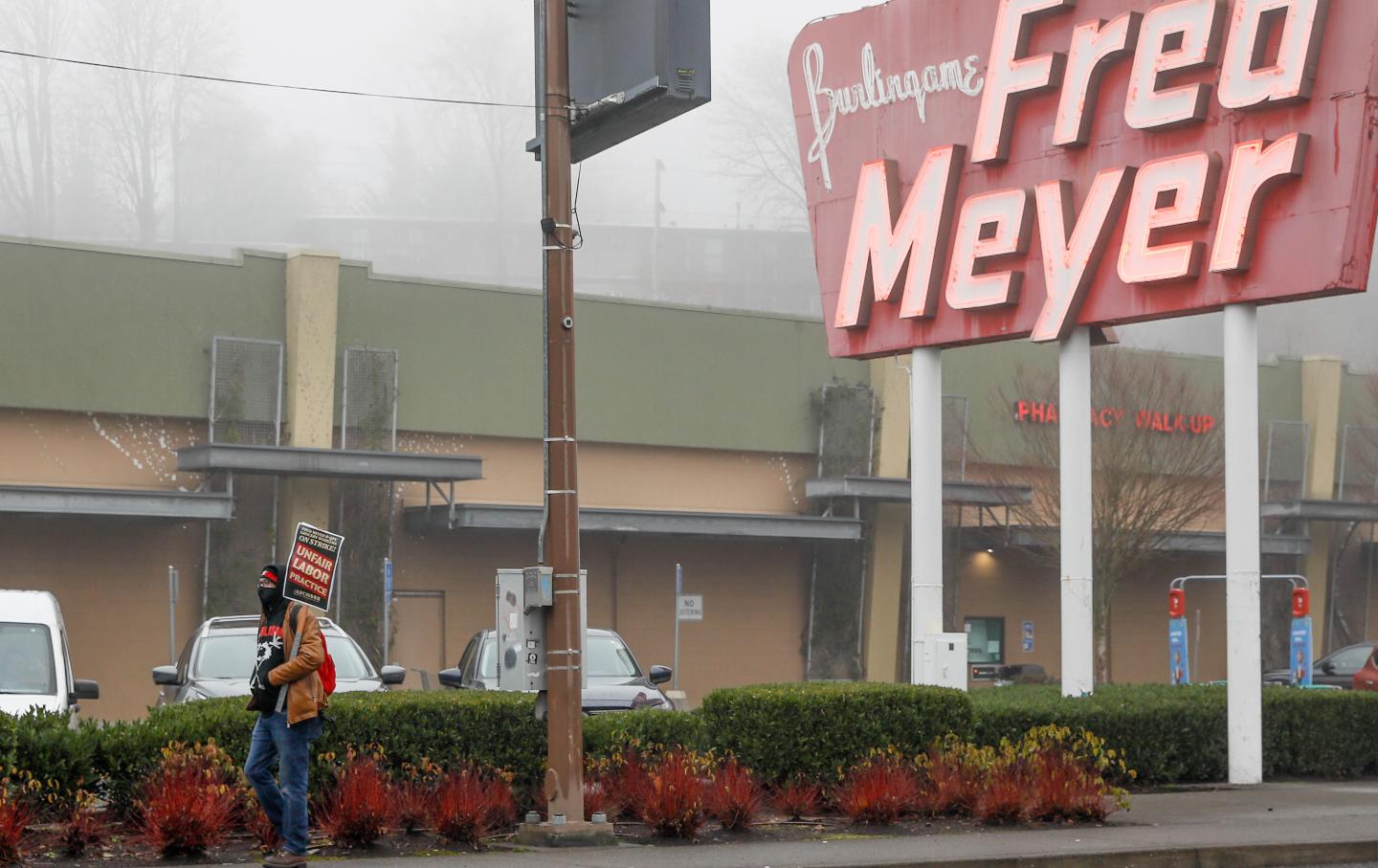 Cindy Wilbur has spent over 20 years working for Fred Meyer, a big-box supermarket that is part of the Kroger family of grocery chains, and for the first 18 of them, she was happy. Back then, she was employed as a food price changer and making decent money working 48 hours a week. After itchy feet led her to try a string of sales jobs for other grocery chains, like Kraft and Advantage, Wilbur realized something wasn’t clicking. “Although I was good at sales, I didn’t really enjoy it,” the soft-spoken 51-year-old told me in a phone call earlier this week. “I really stopped and thought about what was the last time I was really happy in my job, and that was when I was at Fred Meyers.” She returned to the chain in 2020, and began working at the Federal Way location near her home just outside Seattle, Wash. Then the Covid-19 pandemic hit, and everything changed. Now, she said, “I would swear that I was in a completely different company.”

With interjections from her beloved imperial Shih Tzu, Charlie, in the background, Wilbur told me how hard it was pay her bills in her new job in the online orders department, now that her hours have been slashed to 20 per week. She said she sees new workers being hired all the time and frets about losing her health care coverage, which is only available to employees who work 80 hours a month. If she loses so much as an hour to traffic or a miscommunication, the consequences are brutal. “I remember a few times now I received letters in the mail saying in two months, you won’t have medical coverage,” she said. Wilbur, who makes $18.10 an hour, has medical issues that require regular doctor visits, and she tries to help as much as she can a disabled sister and a 97-year-old grandmother. Charlie is sick, too, and his vet bills aren’t cheap either.

Wilbur is two months behind on rent, and several months behind on her power bill. The Fred Meyer job was supposed to augment her savings, which she’d built up into “a nice little nest egg” over the years, but instead she has depleted those savings just trying to get by. She told me she’s now planning on picking up a second job, which will have her working seven days a week, because the $362 per week (before taxes) she earns at Fred Meyer is not enough to survive. “Each time I go to look at my weekly pay, I feel a little sick to my stomach,” she said. “I have quite literally faced the choice of, do I eat or do I put gas in my car? Do I pay some on my power bill? Do I put this in my savings for rent, to catch up on the rent that I’m behind on? We have a mandate in Washington state right now to protect people from evictions and from having their power shut off. And if it wasn’t for that mandate, right now, I would be homeless.”

Wilbur is one of the nearly half a million people who currently work full- or part-time for Kroger or one of its subsidiaries, and the strenuous, uncertain conditions she deals with on the job are far from unique. A new white paper from nonprofit researchers at the Economic Roundtable called “Hungry at the Table” found her story reflected in thousands of other workers. Two-thirds of the 10,000 Kroger workers they surveyed said that they do not earn enough money to cover their basic expenses every month, with 44 percent of them reporting that they cannot pay rent and 39 percent saying they can’t afford groceries. Fourteen percent reported that they are currently experiencing homelessness or have been homeless within the past year. Eighty-five percent of the single parents surveyed are experiencing food insecurity. The 10 percent discount Kroger offers its employees must feel like an insult when they’re spending their days surrounded by food they cannot afford—and when the company’s CEO, Rodney McMullin, has seen his pay increase by 296 percent over the past decade, taking home over $22 million in 2020. Fueled by the very pandemic its workers were battling, Kroger’s profits spiked to $132.5 billion in sales during 2020, and netted $2.8 billion in profit during 2020.

Scheduling is a concern, too, both in terms of hours being cut and in the scheduling process itself. Over half of workers surveyed have work schedules that change at least every week, with 13 percent dealing with schedules that change every single day. “My work is never the same each week,” Wilbur said. “Each day it changes; sometimes I’ll work at 7 am, sometimes at nine, sometimes 11 am or 12 to 4 o’clock.” For workers who have had to take on second jobs or have family commitments, the system is untenable. Wilbur told me about a coworker who has young children and is desperate to keep those medical benefits for their sake, even if the schedule kills her. “She has been working herself to the bone to try to take care of her and her children,” Wilbur said. “She has picked up a second job, and I’ve seen a change in her. She’s so tired. And I don’t know how much longer she can keep up with it.”

These workers do have one advantage that many other grocery workers don’t—a union. Kroger employees are represented by the United Food and Commercial Workers Union (UFCW), who funded this new study and have pushed employers to take Covid precautions seriously as the pandemic has raged on. Earlier, the union won hazard pay for its members, and when that temporary bump evaporated two months later, Wilbur and her coworkers fought back. She became involved in a public pressure campaign to shame Kroger into doing the right thing, and was one of several union workers who spoke in front of the Seattle City Council last December urging it to reinstate hazard pay.

Their efforts paid off; they won a three-month extension and $4 per hour pay bump. Unfortunately, as she told me, once that period was over, “without a word, it was gone.” Her store’s Covid rules soon fell by the wayside too. Now, two years into the pandemic, between the customers who refuse to wear masks and a lack of safety protocols in place, it’s hard not to feel hopeless. “There’s just no protection, none,” she sighed. “In our store’s deli department, we have so many Covid-positive employees, that if there is one more, they have to shut down the department.”

When I asked her about how the pandemic has affected the way she interacts with customers, Wilbur emphasized how much she does appreciate it when people thank her for what she’s doing, or are even just polite. There are “rude, nasty” ones, but she tries not to focus on them. Right now, she works in the pickup department preparing online orders and taking them out to customers’ cars, a service that she says she’s seen a lot of elderly or otherwise medically vulnerable people use and that she’s proud to provide. “Just a little bit of patience is all I ask for,” she said.

But ultimately the customers aren’t the biggest problem facing Wilbur and her coworkers at Kroger stores across the country; it’s the employers who have failed to protect them while expecting peak performance from their overworked, underpaid, and, as it turns out, hungry and stressed-out employees. It isn’t just Seattle, either; workers at two other Kroger subsidiaries, King Soopers and City Market in Colorado went on strike early Wednesday morning. The strike—officially over the company’s failure to negotiate in good faith—involves 8,000 workers at 78 stores. The company has already advertised for scab workers at $18 per hour—two dollars more than the union workers are paid. The striking workers have asked customers to avoid shopping at King Soopers throughout the duration of the three-week strike, and members of Denver’s BCTGM Local 26—who have pledged to honor the UFCW picket line—have also voted to strike. They’ll meet with the company on January 19 to determine whether or not the union will walk.

Just like Wilbur, the Colorado workers received hazard pay during the very beginning of the pandemic, only for it to disappear six weeks later; workers also report being harassed and even assaulted by customers, and crushed by heavy workloads caused by chronic understaffing. “The companies were thriving, but our workers didn’t thrive,” UFCW Local 7 president Kim Covoda said during a Monday press conference. “Know what our workers got? Covid. Attacked. Beat up. Spit on. Slapped. Overworked. And the company? They did great. They did absolutely great, sitting behind their desk doing their job by Zoom.”

Meanwhile, the Economic Roundtable paper provided a number of recommendations to alleviate the harm being caused to the Kroger workforce, from raising the hourly wage to a more livable $22 per hour to hiring more workers on full-time and offering housing assistance, child care assistance, and a 50 percent employee discount. All or any of these steps would be an improvement, and a relatively light lift for a company that continues to rake in billions of dollars. As it stands now, workers like Wilbur have borne the cost of those profits for far too long—and it’s about goddamn time they got a break.