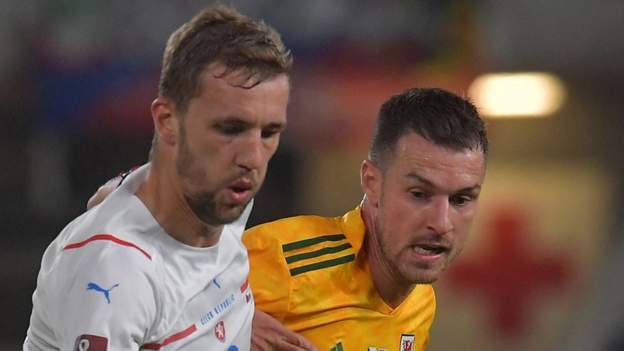 Wales’ enterprising display was not enough for victory against the Czech Republic as the two sides produced a thrilling 2-2 World Cup qualifying draw in Prague.

Captain Aaron Ramsey’s composed finish in an otherwise frenetic first half gave Wales a lead which lasted less than two minutes as Jakub Pesek scored on the rebound.

The Czech Republic were gifted a bizarre second goal early in the second half as Wales goalkeeper Danny Ward failed to control a Ramsey backpass and allowed it to roll into the net.

Wales responded in style as Daniel James equalised with an assured finish which sparked a period of intense Welsh pressure.

Robert Page’s side created many chances, but their inability to find a winner their dominance deserved means they remain third in Group E, trailing the Czech Republic on goal difference, albeit with a game in hand.

With Belgium’s eight-point lead at the top making automatic qualification effectively impossible, Wales’ battle with the Czech Republic for second spot – and passage to the play-offs – looks set to go down to the wire.

Wales are already all but guaranteed a play-off place thanks to their success in the Nations League, but finishing second in this World Cup qualifying group could secure a more favourable draw in that knockout stage.

That was why Page had described this as “a must-win game to guarantee finishing second” beforehand and, while this result may not further their cause, Wales face Estonia in Tallinn on Monday knowing they still have three matches left to overhaul the Czech Republic.

Victory in Prague was of equal, if not greater, importance to the home side, who had played a game more than Wales and approached this fixture with an attacking intent which bordered on reckless.

It made the Czechs dangerous – with Adam Hlozek forcing Ward into an early save – but it also made them vulnerable.

Whenever the Czech Republic pushed forward, they left huge amounts of space behind which Wales exploited.

James’ pace made him the obvious target for Welsh counters and he was found brilliantly by a Ramsey pass in the 17th minute but, with just one Czech defender tracking back between the Leeds winger and Kieffer Moore, James dithered before overhitting his pass to Moore, whose shot was smothered by goalkeeper Tomas Vaclik.

It was a glorious opportunity and a warning which the Czech Republic did not heed.

From a Czech corner, Ethan Ampadu drove out of the Welsh defence and passed to Neco Williams wide on the right. The Liverpool full-back’s cross grazed James’ head and fell to Ramsey, in space at the far post, who calmly waited for Vaclik to commit and lifted a delicate finish over the keeper.

Ramsey’s composure was at odds with the chaos of the first half and, true to the game’s frenzied pace, the Czech Republic were level under two minutes later.

Wales’ defending was rash as all three centre-backs rushed towards Filip Novak, whose shot was saved by Ward, but the ball went into the path of Pesek to equalise.

Wales might have felt aggrieved not to be leading at the break but, four minutes into the second half, they found themselves behind in unusual circumstances.

Ramsey regained possession deep in his own half and passed back to Ward and, while it was a firmly-hit pass, it was straight at the goalkeeper, who inexplicably failed to control the ball and instead allowed it to only brush his boot on its way into the net.

It was a deeply unfortunate moment for Ward, who has performed superbly for Wales, but it did not affect him or his team-mates as the game wore on.

Wales were soon back on top and cutting the Czech defence open at will, with substitute Harry Wilson particularly impressive.

Wilson threaded an excellent through ball to James, who took a touch and fired firmly into the bottom corner to bring Wales level, and then played in Ramsey, who had a shot well saved by Vaclik.

Moore was the next to threaten, heading wide from a Connor Roberts cross, before Roberts’ backheel from Moore’s pass went close.

Chances were piling up and the Czech Republic looked increasingly stressed in defence. Although Wales could not turn their dominance into victory, this performance – arguably their best of this campaign – will give Page and his players reason to believe they might yet be the first Wales side since 1958 to qualify for a World Cup.