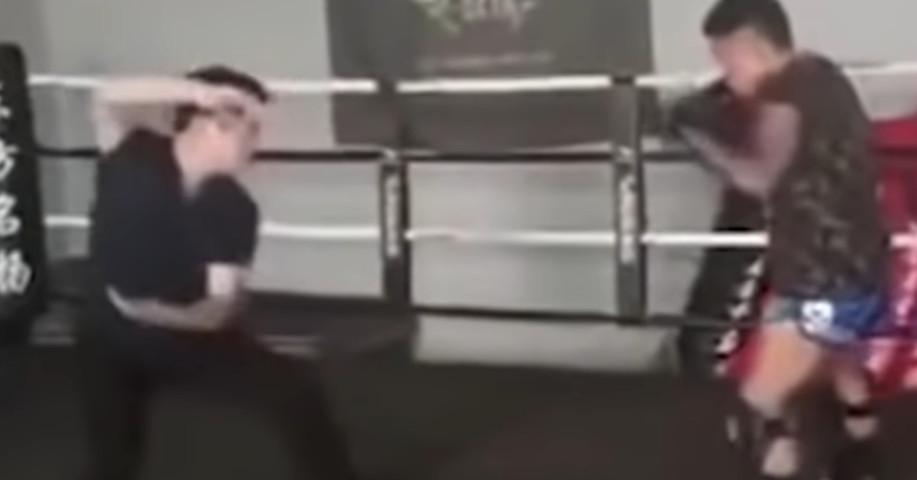 Sure, 2022 is barely underway. But, it’s never too early to get unconventional, and we’ve no shortage of that just a couple weeks into January. So, without further ado, here’s another look at the wild, weird, and woolly action from the world of fringe of combat sports.

Jerry over at Fight Commentary Breakdowns kicks things off with an unfortunate set of events.

One of the true highlights of the channel is watching martial artists of the more traditional disciplines adapt and evolve with the times in attempts to modernize. A lot of this is done through trial and error and a fair amount of what we see is the in-progress version of that growth. That’s a great thing, we can all stand to learn more in life overall.

That’s not what we’re getting today.

Today we’re back to people way out of their depth and no way to even stay afloat. The first casualty of this is Iron Palm, who – in what perhaps is an unfortunate series of events – agreed to take on a boxer, under boxing rules with boxing gloves. As the name suggests, yes, he is a Kung Fu practitioner. Setting the somewhat humorous fact that he cannot use his actual palms aside, he seems incapable of holding his own against a competitor that is only striking with his hands.

No footwork, no head movement, just vibes. He runs in with clumsy hooks, gets dropped and rocks back and forth a bit on the canvas. Ben Askren had more composure than this.

The second example is somehow sadder as a Sanda practitioner decides he doesn’t need gloves. Iron Palm should have probably asked for that, but maybe his technique was too lethal and he needed something like Potemkin’s collar from Guilty Gear. It’s a kind gesture to ensure the safety of opponents, but this other guy decided that he needed all the power he could generate.

And boy howdy, does he do some generating.

There’s a fair amount of this. It’s like David Carradine using that exercise hose (say hi to the dog!), until his opponent — a kickboxer — decides to rush inside and touch him up. Sanda Guy gets dropped, gets up, and it clearly smarts. Pretty sure he’s never drilled leg kicks before.

He manages to get one in on the kickboxer with a shoulder shove that tilts him over, but after that, it’s one-way traffic. It’s always a little sad, after all to see yet another individual that is very, very out of his element and appears to have only trained forms without ever sparring once. The man does not deal well with any level of damage that comes his way, shelling up and turning around when things got hot.

It’s a shame to see someone come in and get roasted like that, especially since he was in the most unfamiliar situation possible. Dude’s got a lot of work to do to adapt his style to what’s hot in the streets these days.

Karate Combat is exceeding expectations when it comes to wild action and jaw-dropping finishes. Their latest knockout compilation is a marvel.

It’s Karate, man. It’s fun. This is the time to get into Karate Combat if you haven’t gotten around to it yet.

The Sambo International Federation really knows how to highlight some extraordinary action every time, and this collection is no exception:

The athleticism is off the charts here, and the field is unsurprisingly competitive. Be sure to give them a follow as well.

STRELKA will never run out of goofy matchups of randos to pit against each other, and this week is no different.

Don’t even try making sense of it. I know, it’s the same formula, ugly striking followed by a brief encounter on the ground and a submission out of nowhere. It’s probably the ugliest guillotine I’ve seen in years, but yeah. Rules is rules and it paid off.

But see, this? This is something to get excited for. These guys have a far better grasp of what we’re here for.

Then we get this. Masterful timing. Give that man an extra chicken wing for that performance.

Sniped. The term you’re looking for is sniped, as in: “ayo, that dude right there in them red shirts got sniped.“

Finally, we’re back in Poland for a literal exhibit of big meaty men slapping meat. Slap fight promotion Punch Down had an event recently, and these two dudes gave each other the business.

[The video won’t embed for some reason, but you can still watch it by clicking this link here]

That’s all for this week, kids. Keep your powder dry, or whatever. Be kind and careful, Omicron is out in these streets. And remember – you might think you can fight, but there are many guys like you all over the world.