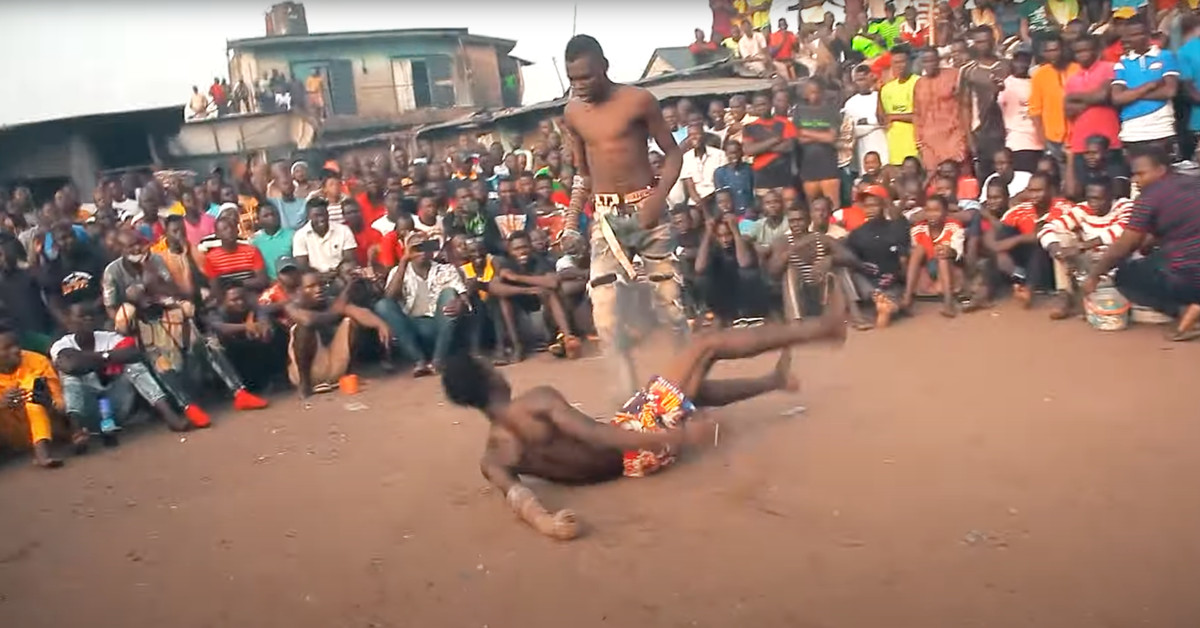 Every now and again we like to offer something a little different, and today we’ve got a new feature in which we highlight some of the less conventional combat misadventures out in the wild.

For our maiden voyage, we’ve got a straight stunner. Courtesy of STRELKA Street Fight Championship, two combatants decide to duke it out in the desert for pride and money. Simply titled Apache vs Mexican Monster, this was a brief but intense display of less-than-properly regulated MMA. The shorter of the two gentlemen immediately goes for the clinch and and takedown, but it goes poorly for him. He ends up on his back, tries to entangle his legs only for the taller of the two fighters standing straight up. From there, it was straight up one-way traffic.

Feeding the other guy a diet of nothing but hard hands, the guy on the ground eats shots and tries to cover up, somewhat successfully. What he didn’t expect was Hellboy’s Right Hand of Doom, and that’s what put him out hard. Tall guy walks away like Mark Hunt, the other guy is left planking between the bottom ropes. The staff walk him out, but it was clearly a rough day at the office for that guy.

I don’t know about you, but I want to see more of this guy. It wasn’t pretty, but it led to a Sonic Blast Man shot that was a definitive exclamation point.

Next up we’ve got Dambe Warriors, providing a much more unique take on violence and combat sport. If you’re not familiar with Dambe, it’s simple. Wrap up one hand, and strike with it. Much like MMA, it’s three five-minute rounds and participants can only strike with the wrapped hand. Rounds are won by knocking an opponent down, but the fight can be won by knockout or decision.

Which is how we got here, with a pretty wild bout between Dage and Zimamma. Close quarters battling pops off and they’re off to the races with punches in bunches. Eventually, Zimamma falls back on his hands and feet, and it’s brutal to watch:

Dambe Warriors has their own YouTube channel as well for you to peruse their back catalogue, and you can learn more about them via their website.

Bare knuckle boxing is having something of a moment, and this group from Russia is delivering some unpredictable action. Check it all out right here:

Finally, we’ve got SlapFIGHT championship out of Missouri, bringing in some of the most unpredictably insane action you’ll find online. Sure, you’ve seen grown adults slap each other stiff, but this is on a different level.

How and where do they find these guys? No idea. But the current heavyweight champion is a menace. The artist only known as Darius the Destroyer has been mowing guys down, and any mere mortal looking to challenge him has been dealt a massive amount of disappointment.

Whatever they’re feeding this guy, it’s got to be fortified with all essential vitamins and minerals part of a nutritionally balanced breakfast. Dude served HARD, and there’s no way we’d spoil how this goes. You simply must watch it for yourself.

So that’s our first edition of “What The Fight?” and we’ve got more action coming your way for next time.