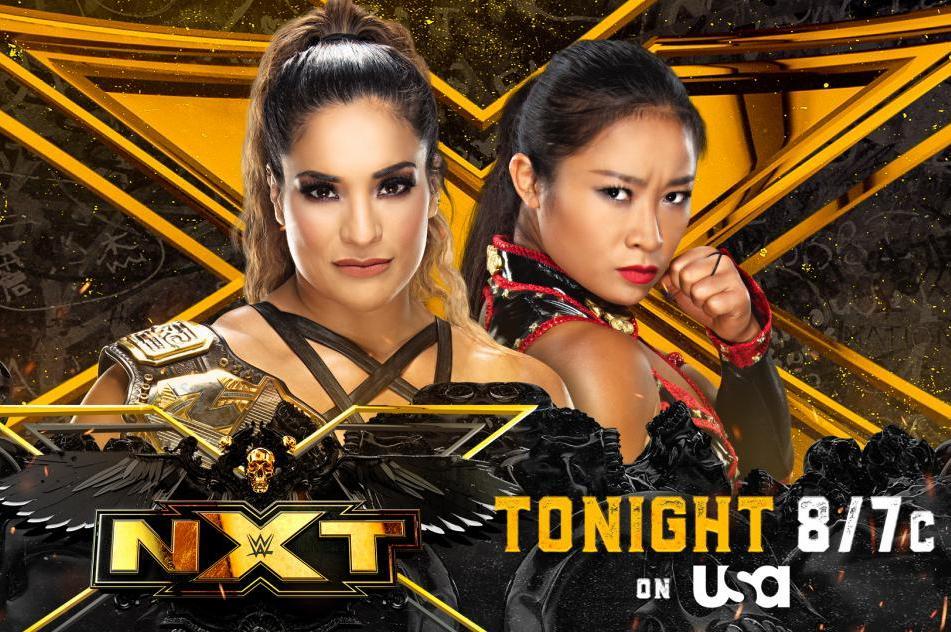 WWE NXT is changing. Each week, the roster evolves as its established stars head to Raw and SmackDown. And the July 20 edition continued to create the new foundation of the black-and-gold brand.

Raquel Gonzalez remains a dominant champion in NXT, but she faced a threat unlike one she has faced before. Xia Li demanded a shot at the NXT Women’s Championship for her honor and for Tian Sha, a group that has looked unstoppable since arriving together in late March.

Diamond Mine have attempted to make a statement at the expense of NXT cruiserweight champion Kushida. The Japanese Superstar was ready to answer back in a tag team match alongside Bobby Fish, facing Roderick Strong and Tyler Rust.

The NXT Breakout Tournament continued to roll on. This week, Odyssey Jones and Andre Chase made their brand debuts in a one-on-one clash of power against speed.

Franky Monet has been an enigma in NXT, gaining power and importance without competing against top competitors. This week, she was glad to step into the ring again, though her latest opponent was unknown.

Tuesday’s packed show promised much in an attempt to bring excitement back to a roster in flux.

Kushida and Bobby Fish attacked Roderick Strong and Tyler Rust on their way to the ring. This gave them a short advantage, but The Messiah of the Backbreaker turned it around by reversing Kushida’s signature technical offense into a series of vicious backbreakers.

Fish got the hot tag and sent the heels reeling. Once again, though, Diamond Mine restored their momentum when Strong threw Fish back-first onto the apron.

A final big hot tag got the NXT cruiserweight champion in the ring alone with Rust, and he made him tap out to the Hoverboard Lock.

Fish and Kushida def. Strong and Rust by submission.

This was a solid match, but it surprisingly lacked heat, even with the attempted hot start. There is not enough of a story yet to be excited about Kushida making Diamond Mine pay. The group should be built more first.

Malcolm Bivens should be relied upon more to hype this group. At the moment, the quartet lacks personality, and this early loss takes away from their mystique. Rust looks like he is the same man he always was, tapping out quickly when he got stuck in the Hoverboard Lock.

If the plan is for Diamond Mine to compete with top stables like Hit Row and Legado del Fantasma, the talent needs more direction and must win when it matters.

Jessi Kamea walked out with Franky Monet, joined after the bell rang by Robert Stone. And Mandy Rose sat at the announce table to watch Monet’s work.

Jacy Jayne got in a few good shots on Monet, but La Wera Loca put her down with the Glam Slam.

The squash matches continue for Monet. Kamea and Stone did not add much to her act in the first appearance from the trio, but it is a slow-build story. The most intrigue here was considering what role Rose plays with La Wera Loca.

This wasn’t a bad segment. It was just the classic middle-of-the-road filler for a future story. Monet can do more, and her first big match will truly reveal how much NXT sees in her.

Kyle O’Reilly challenged Austin Theory due to comments made by The Way member previously, but Johnny Gargano told his protege he had to wrestle on his own this time.

Theory came in confident and asserted his strength early, but he was met by the strikes of KOR, who sent him reeling outside. The two went back and forth as O’Reilly wore down Theory more with a focused attack on his leg.

O’Reilly nearly made Theory tap out to an ankle lock. The big man nearly took the win off a spinning fireman’s carry slam followed by a neckbreaker. However, Theory set off an anger in O’Reilly by grabbing the steel steps that led to him hitting a diving knee drop into the kneebar for a win.

The Way argued backstage about Theory losing and Indi Hartwell’s crush on Dexter Lumis. Theory walked out after Gargano refused to high-five him.

Theory and KOR had a great TV match together with limited story behind it. Theory has consistently improved as a performer since he joined The Way. This was a great showcase of that in which he worked a smooth, clean, story-focused match with a top veteran.

This was ultimately about O’Reilly finding his “killer instinct” again. Theory was the right opponent to push him until he had to flip that switch. The stage is set even more for a final battle between KOR and Adam Cole that can end their rivalry.

Legado del Fantasma had promised a Mariachi Musical Madness, but Santos Escobar told his mariachi players to leave the ring. He refused to “lower” himself to the level of his rivals by using music rather than wrestling to define himself.

Hit Row arrived to talked down the group. Isaiah “Swerve” Scott explained that this was his payback for Raul Mendoza and Joaquin Wilde getting in the way of him winning the NXT Cruiserweight Championship.

A brawl broke out between the two groups where B-Fab saved Swerve from taking a guitar to the back. In response, Hit Row isolated Wilde, who took a superkick and a guitar to his own back for his trouble.

The story of Legado del Fantasma vs. Hit Row has gained so much heat quickly thanks to the history behind Swerve vs. Escobar. Scott is a fantastic promo and only needed a few words to make clear this all goes back to the first match between the two men.

While both teams look like heels, the crowd has found the team they are behind. Swerve was seriously over in this segment. When the two clash for the NXT North American Championship, it will be one of the biggest matches the black-and-gold brand could put on.

Odyssey Jones made clear how much this NXT opportunity mattered to him, and Pete Dunne and Oney Lorcan called out Tommaso Ciampa and Timothy Thatcher for a rematch next week.

MSK were ready to explain what their team name stands for, but Imperium took over the feed. Marcel Bartel and Fabian Aichner insulted the tag team division for dishonoring the sacred mat with antics over actions.

Andre Chase shocked everyone early by taking down Jones with help from the announce table. He hit a moonsault on a standing Jones that almost stole the win.

However, the big man hit his second wind and never looked back. He planted Chase with a side slam to take the victory.

Jones mostly made an impression in this match because of his charisma, and the crowd was behind him from the outset. The match did not change anything. He and Chase were an odd combination, leading to a disjointed contest, a short squash where the wrong man got in most of the offense.

Chase never had a chance, which was clear from the outset. It would have made far more sense for Jones to show more of what he can do in the ring. Hopefully, that will come in the next round.

The tournament has started with a few unexciting short contests. It is time to get some more serious action. The remaining talent should be able to deliver that.

LA Knight mocked Cameron Grimes and forced him to carry his bags into the arena. Drake Maverick tried to help The Technical Savage, leading to Knight challenging him.

In the match, the WWE million dollar champion looked dominant until he took his eye off the ball. He kept demanding that his butler hold the title high for him. Maverick sent Knight right into the championship and rolled him up for three.

Afterward, Knight angrily beat down Maverick. Grimes tried to help Maverick until Knight demanded he punch Maverick in the face. Grimes had to be a man of his word and follow Knight’s demands.

It would have been more interesting if this match had lasted longer, but the story was well-told throughout. Maverick remains a fiery cruiserweight who can make any heel look dangerous. He fits perfectly into this story.

Grimes was a heel when this all started, but it has so completely turned him face that he cannot bring himself to hit a defenseless man without insistence. This may be one of NXT’s best stories right now.

Xia Li promised that she would fulfill her destiny, but Raquel Gonzalez refused to take her as a serious threat. Dakota Kai hyped up the champion further.

Gonzalez used her power against Li early on until the challenger caught the champion’s left leg around the steel post. This gave Li a target that she would not let go. Her strikes and submission moves wore out the knee of the titleholder.

This left Gonzalez working from beneath, desperate to take down her smaller competitor, who kept landing kicks and knees. A spinning Vader Bomb from the champion knocked the wind out of Li, who managed to kick out but struggled to get up.

When officials allowed the challenger to continue competing, Gonzalez landed a single-arm powerbomb for the definitive win.

Gonzalez has not had a challenge quite like this before as champion. This was the first time she was wrestling someone less experienced than her in a major match. The two made this work as Li went for the classic tactic of wearing down the big wrestler by taking out her leg.

However, just as this was getting going, Li took a bad bump off a Vader Bomb, and the match stopped right there. These two have a good match in them down the road. Hopefully, Li’s injury is only a scare.

Samoa Joe called out Karrion Kross, but he was not yet in the building. William Regal demanded that Joe settle this feud peacefully. The Samoan Submission Specialist promised to end it but not peacefully. Joe stalked the arena until Kross arrived.

After the main event, Joe stomped back to the ring to demand Kross face him. Instead, the NXT champion appeared on the big screen. He revealed he had laid out Regal and would do anything he wanted anywhere he wanted.

This was a slow-building segment over the entire episode of NXT that worked perfectly. There are few who sell anger like The Samoan Submission Specialist. He came off more dangerous than anyone else in NXT, even Kross.

However, the final twist to close the show shifted that momentum right back. No matter what Kross does on Raw, he still has a fantastic story to finish in NXT that needs to be protected.

Kross vs. Joe should be special.