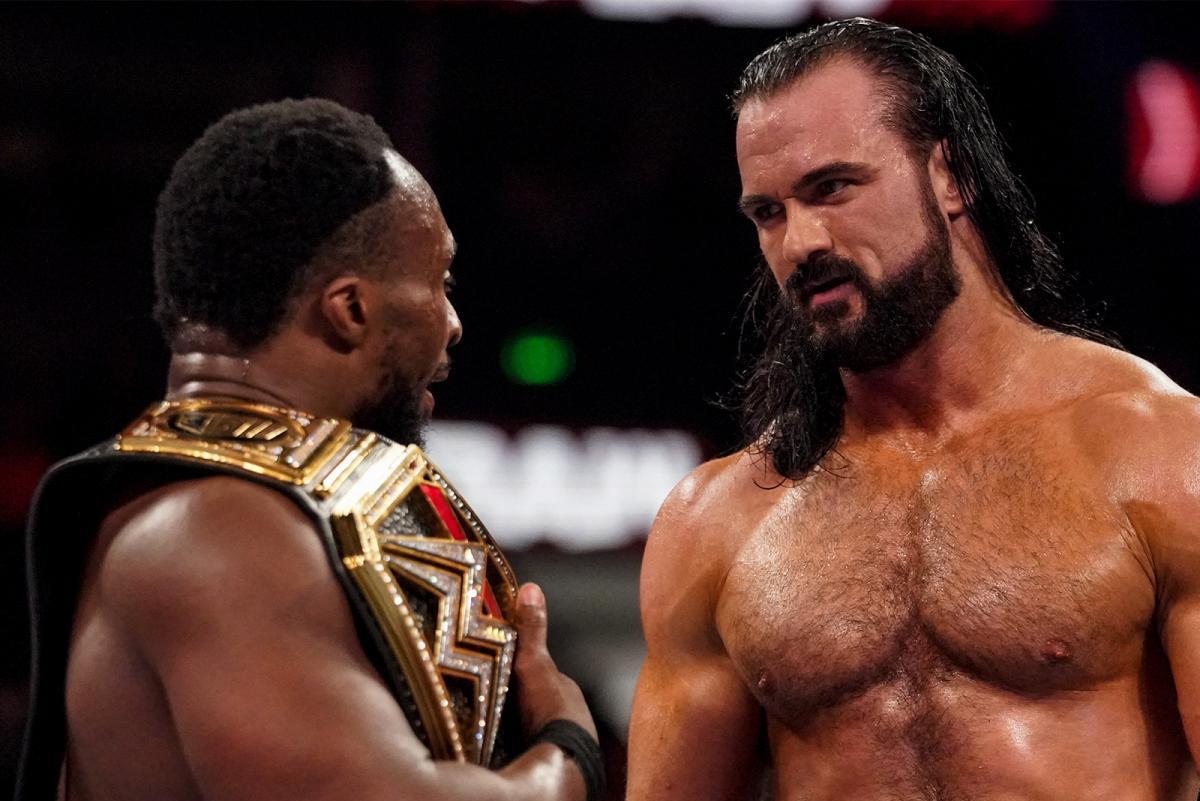 WWE is currently setting up the card for the Crown Jewel pay-per-view on October 21, but it also has Survivor Series to worry about next month.

The past week has seen management announce the King of the Ring and Queen’s Crown tournaments that will culminate with the finals at Crown Jewel, so we have been seeing various quarterfinal matches for the men and women.

Monday’s show included a showdown between Big E and Drew McIntyre. With The powerhouse of The New Day on Raw and McIntyre drafted to SmackDown, it looks like The Scottish Warrior is making one last play at the WWE Championship.

Let’s take a look at what happened on Monday’s Raw.

Raw opened with McIntyre making his way down to the ring with his trusty sword, Angela. He didn’t get to speak for long before Big E made his way to the ring looking fired up.

He told McIntyre that he gets why he wants to be WWE champion again because he has seen the benefits that come with having the title.

The Scottish Warrior said he is going to run through Big E as he has to Goldberg and Randy Orton, and there isn’t a damn thing he can do about it. Before they could go any further, The Usos came out onto the stage.

After some trash-talk, they agreed to have a tag team match later in the show. The announcers made sure to mention that WWE management has to make it official. The Usos attacked McIntyre and Big E before making a quick exit.

This was a cut and dry talking segment. Two rivals traded some words before they were forced to align against a common enemy. We have seen this kind of segment hundreds of times over the years.

The best part was Big E’s portion of the exchange. That guy can make anything funny, but it wasn’t enough to make the whole segment anything special. This could have been copied and pasted from another script with the names changed and nobody would have noticed.

Kofi Kingston and Xavier Woods gave a backstage interview before heading to the ring for the first match. Why didn’t they run out to help Big E when The Usos attacked?

The KOTR tournament continued with another first-round match between Woods and Ricochet. They locked up and exchanged wristlocks and counters until Woods hit a running shoulder to score the first knockdown.

Ricochet tried to springboard into the ring but Woods hit the top rope to trip him. They both ended up on the top rope where The One and Only hit a massive superplex to send us to a break.

We returned to see Ricochet get a two-count. Woods hit a beautiful gutbuster to get a near-fall as he began to make a comeback. Ricochet grabbed Woods for a cartwheel slam and a running kick, but he wasn’t able to make a cover before Woods rolled out of the ring.

The high-flyer lept over the ring post and took out his opponent at ringside. He went back into the ring and drilled him with a suicide dive. When he went for a second, Woods countered and sent him into the barricade. He brought Ricochet back in and climbed to the top rope for a flying elbow drop to get the pin.

This match allowed both men to show off some of the skills they don’t always get to use, and that allowed them to put on a fantastic show.

The length of the bout was fine but with a few more minutes, they would have had the match of the week without question. Some of the spots they did were performed with incredible precision.

This is Woods’ first step toward achieving his destiny to become the King of the Ring. If he doesn’t win the whole tournament, then what are we even doing here?

The reunited Shelton Benjamin and Cedric Alexander took on Mustafa Ali and Mansoor in the next match. Ali and Benjamina started for their teams, but they both tagged their partners relatively quickly.

Ali and Mansoor hit a double-team move to Alexander but he avoided the 450 from Ali. He hit a Michinoku Driver for the pin while Benjamin held Mansoor back.

Ali shoved Mansoor to the mat and walked away looking angry after the match.

It should be noted that the poor grade for this match is a reflection on whoever booked them to only get two minutes, not the four Superstars involved.

Mansoor is still growing but Ali, Benjamin and Alexander are all great workers who have the potential to steal the show on any given night. This kind of match is unnecessary and does nothing to help anyone.

Shayna Baszler and Dana Brooke met for a match and The Queen of Spades got off to a strong start. Brooke was able to get in some of her own offense before Baszler grabbed her in the Kirifuda Clutch.

Brooke countered into a pin for a two-count. The MMA fighter grabbed her in an ankle lock but Brooke countered once again. She was met with a stiff kick to the face to give Baszler an easy win.

While this match was just as short as the tag bout we got before it, booking it this way made a lot more sense because they are trying to build Baszler back up into a monster competitor.

She shouldn’t be having long, competitive matches with the likes of Brooke. She should be beating these women quickly and with malice of forethought.

However, even though this was the right call from a booking standpoint, it still wasn’t long enough to be a great match, so it has to be graded with both facts in mind.