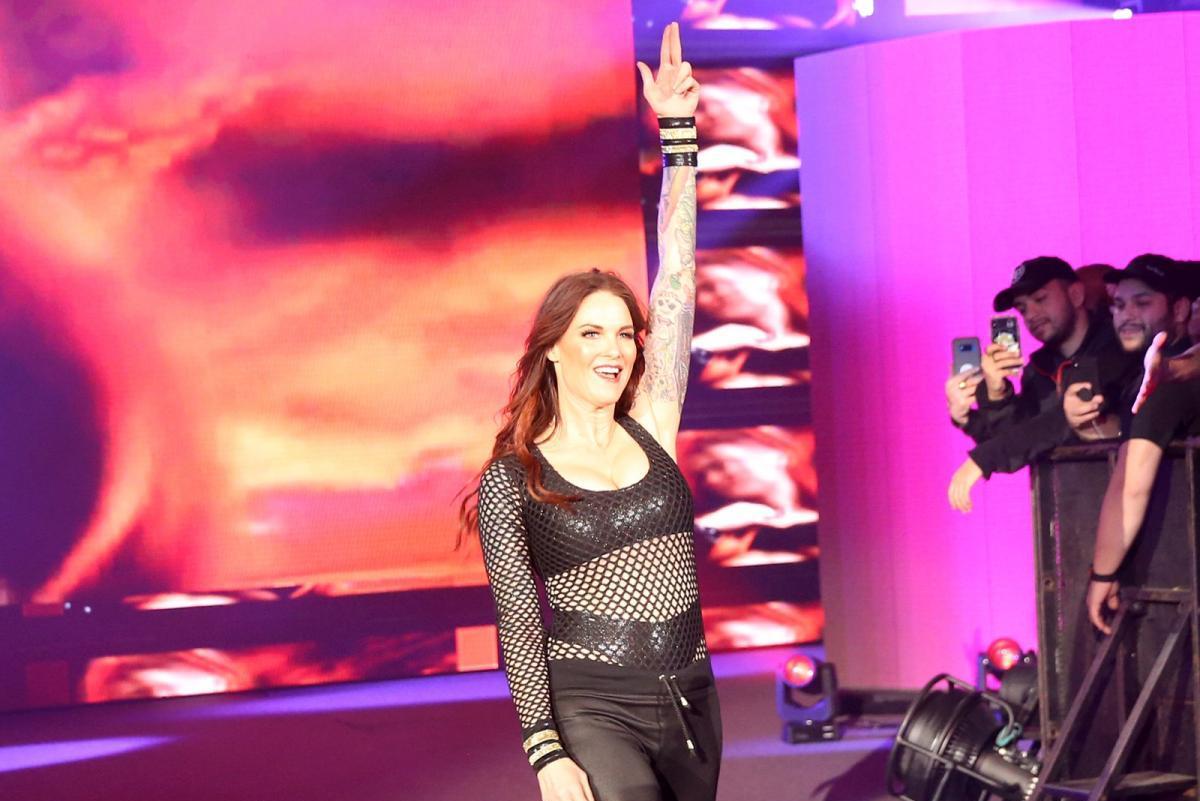 The imminence of the Royal Rumble resulted in a blockbuster episode of SmackDown Friday night that saw a face-to-face between former Shield teammates, Seth Rollins and Roman Reigns, before their clash for the Universal Championship at the January 29 pay-per-view.

It was hardly the only notable occurrence on the Fox broadcast as Hall of Famer and 2022 Rumble entrant Lita returned to the blue brand for the first time in almost two decades.

Who awaited the high-flying trailblazer, ready to ruin her homecoming and why was it Charlotte Flair?

Find out now with this recap of Friday’s explosive episode.

SmackDown tag team champions The Usos kicked off the show, drawing a big pop from fans.

Jimmy and Jey introduced a Fatal 4-Way Tag Team Match to determine the No. 1 contenders to their titles, featuring Los Lotharios (Angel and Humberto), the team of Cesaro and Mansoor, Jinder Mahal and Shanky, and The Viking Raiders (Erik and Ivar).

The champs called for the bell but not before delivering cheap superkicks to Erik and Mansoor.

As The Viking Raiders built momentum following the break, Cesaro and Mahal worked together to set up a superplex on Ivar. Erik joined in and executed a Tower of Doom spot, bringing all three men to the mat below in time for another break.

Cesaro teased a swing on Ivar but Mahal broke it up. Los Lotharios exploded through the ring and wiped out the competition. When Ivar teased the same, he was met by dropkicks from the heels. Ivar recovered and joined Erik for the Viking Experience and the win.

The number of commercial breaks and their placement in this one really hurt what was a fun match in between.

The Viking Raiders have been flirting with a title opportunity for the last month or two and really are the only credible team left to face The Usos for the tag titles at this point. That could have been avoided had the creative team not spent weeks booking the teams to trade wins and losses, or just straight-up made up a team in Cesaro and Mansoor.

Erik and Ivar are too good to be wandering aimlessly. Hopefully, their title opportunity reminds those in power of that and gives them a role on the show with more consistency than they have enjoyed to this point.

Sami Zayn entered the arena, a mic in hand, to address the WWE Universe.

He discussed his upcoming Intercontinental Championship match against Shinsuke Nakamura but turned his attention to the events of last week when Johnny Knoxville humiliated him by tossing him over the top rope and to the floor.

“When it comes to being a jackass, no one is better than Sami Zayn!” he said, drawing laughter.

Zayn introduced InZayn, his new stunt show before two associates wheeled him out in a shopping cart with the idea being to launch him up a ramp, over the ring, and to the other side. When he stalled, Rick Boogs appeared, distracting him and allowing Nakamura to attack.

The babyfaces hurled Zayn to the floor, where he hit the target to the delight of Pat McAfee on commentary.

If it wasn’t for the comedic genius of Zayn, this would have been a much, much worse segment.

As he has done with every segment he’s been part of in recent years, he single-handedly elevated the material, making it a fun, inoffensive bit that kept Knoxville’s participation in the Royal Rumble in the forefront and highlighted Zayn’s IC title feud with Nakamura.

Are there better ways to keep the spotlight on the prestigious title? Sure, but considering there was just a feud over a sword in a desk a month ago, this is hardly the worst way to spend a few minutes of TV time.

Natalya repeatedly referenced her three records in the Guinness Book of World Records in the moments ahead of her match with Aliyah, then proceeded to attack her opponent prior to the bell, hoping to add another for shortest WWE victory.

When it was revealed that Aliyah would be able to compete despite the assault, the young star seized an opening and rolled The Queen of Hart up for a historic, record-breaking 3.17-second win.

Imagine how much this would have meant if the creative forces had continued to feature Aliyah instead of letting her fade into obscurity last November after fans had bought into her underdog story.

Instead, she has been a nonfactor on Friday nights and as a result, this meant a hell of a lot less.

That does not mean it cannot lead to more exposure for both women as a nice secondary feud, but the women have their work cut out for them in terms of getting fans to invest after WWE Creative let them down so many times before.

WWE Hall of Famer, Attitude Era star and trailblazer for the women’s revolution Lita returned to SmackDown for the first time in nearly two decades Friday, joining Michael Cole for an in-ring promo.

She expressed her desire to compete in the Women’s Royal Rumble match, believing she has one last great run in her. This, of course, brought out SmackDown women’s champion Charlotte Flair.

The Queen reminded Lita that the last time her bestie Trish Stratus “got bored with being a mom” and came back, Flair beat her so badly at SummerSlam 2019 that she retired. Again.

Some back and forth, including a “big head” chant directed toward the egotistical heel, concluded with a Twist of Fate from Lita and an emphatic message sent to Flair.

Lita popping back up on WWE television will always be a hit with this writer. She is such an integral part of women’s wrestling history, laying the foundation for what Flair and the Four Horsewomen were able to do for the industry coming out of NXT, that it just feels right that she come back for one last shot at a high-profile title opportunity.

Does that mean it will happen? Not necessarily, but Lita doesn’t make a ton of these in-ring returns so hopefully, that indicates there are plans to do something with her.

Especially given this segment and the way that it ended.

At Day 1, as part of the Kickoff Show, Ricochet broke Ridge Holland’s nose. Friday, Sheamus sought to avenge his young protege, battling The One and Only in singles competition.

The former WWE champion dominated the action early, controlling the pace throughout the commercial break. A comeback by Ricochet, complete with a sunset flip powerbomb from the top rope, looked to have the high-flier in a position to score the win.

Sheamus, though, caught him with a Brogue Kick from out of nowhere to score the hard-fought victory.

Backstage, Naomi attempted to take advantage of a broken thermostat and beatdown Sonya Deville but Adam Pearce interrupted. After some back and forth, he sided with Naomi and booked a match between her and Charlotte Flair for next week’s show, a rematch from last Friday night.

Sheamus and Ricochet are in that realm where they can be counted on to go to the ring and for eight or so minutes, turn in a really strong, competitive wrestling match that borders on that good/great line. This was no exception.

Like most cases on WWE TV, it would have meant more if Ricochet was presented as The Celtic Warrior’s equal, but that is a booking issue that neither of the competitors can help.

Sheamus winning was predictable, but that did not hurt the overall quality of the bout. The contest was put in a position to deliver the in-ring portion of the show and it held up its end of the bargain.

As for Pearce setting up Naomi vs. Deville for next week, why the hell didn’t he do that months ago when he saw his co-official abusing her power? Why now?

That development created more questions than answers, certainly not what you want out of a program that is in its fifth month.

Before the match, Kofi Kingston announced King Woods’ calf injury and revealed that he will not compete in the Royal Rumble. Kofi will, though, which brought out Happy Corbin and Madcap Moss. After a verbal exchange, which ended with the former WWE champion vowing to take a “royal deuce” on Moss’ forehead, the combatants met in singles competition.

The match, contested primarily during the commercial break, saw Moss score a signature win with the Punchline neckbreaker.

It wasn’t a big enough insult for the match to take place mostly during the commercial break but then, Kingston lost to Moss. The same Moss that is synonymous with cringe-worthy dad jokes more than his in-ring work.

Does such a win help enhance Moss’ credibility as the company seemingly runs with him as a substantial midcard heel? Sure, but it also devalues Kingston, a former WWE champion who could be utilized to help boost star power on a brand that could desperately use some with the absence of Drew McIntyre and the release of Jeff Hardy, both within the last few weeks.

Seth Rollins started his face-to-face with Universal champion Roman Reigns by reminding him of the one-sided record between the two of them when a title is at stake. Reigns laughed it off, saying he is in “god mode” and that he is the head of Rollins’ table.

“Without Roman Reigns, Seth Rollins is just fine. I was climbing my way up the ladder while you were riding the pine in the CFL,” The Visionary said. He claimed Reigns needed The Bloodline while Rollins was off winning titles on his own.

“I created you and I can destroy you,” the No. 1 contender said while laughing obnoxiously.

Reigns said if he was looking for a mega star from Raw, he would have chosen Rollins’ wife.

The Usos attempted a sneak attack on the dismayed Rollins but The Visionary dodged them and escaped up the ramp. He was overheard saying “I’m living in your head rent-free, Roman” to close out the show.

Given all of the hype that went into this segment, with the video recaps dating back to The Shield and culminating with Rollins’ successful cash-in back at WrestleMania XXXI, this was a disappointment.

That both men are heels, among the top in the company, is one problem. Fans aren’t sure who to cheer, who they want to support, or who they are supposed to. This did not give them any indication in which direction to lean.

The Reigns crack about Becky Lynch and Rollins’ reaction possibly set The Visionary on a quest to prove himself, which would be that emphasis fans need to get behind him. Hopefully, something happens to persuade the fans in one direction or the other because a match of this magnitude, between two of this generation’s greatest, deserves a hot crowd come the Rumble premium live event on January 29.