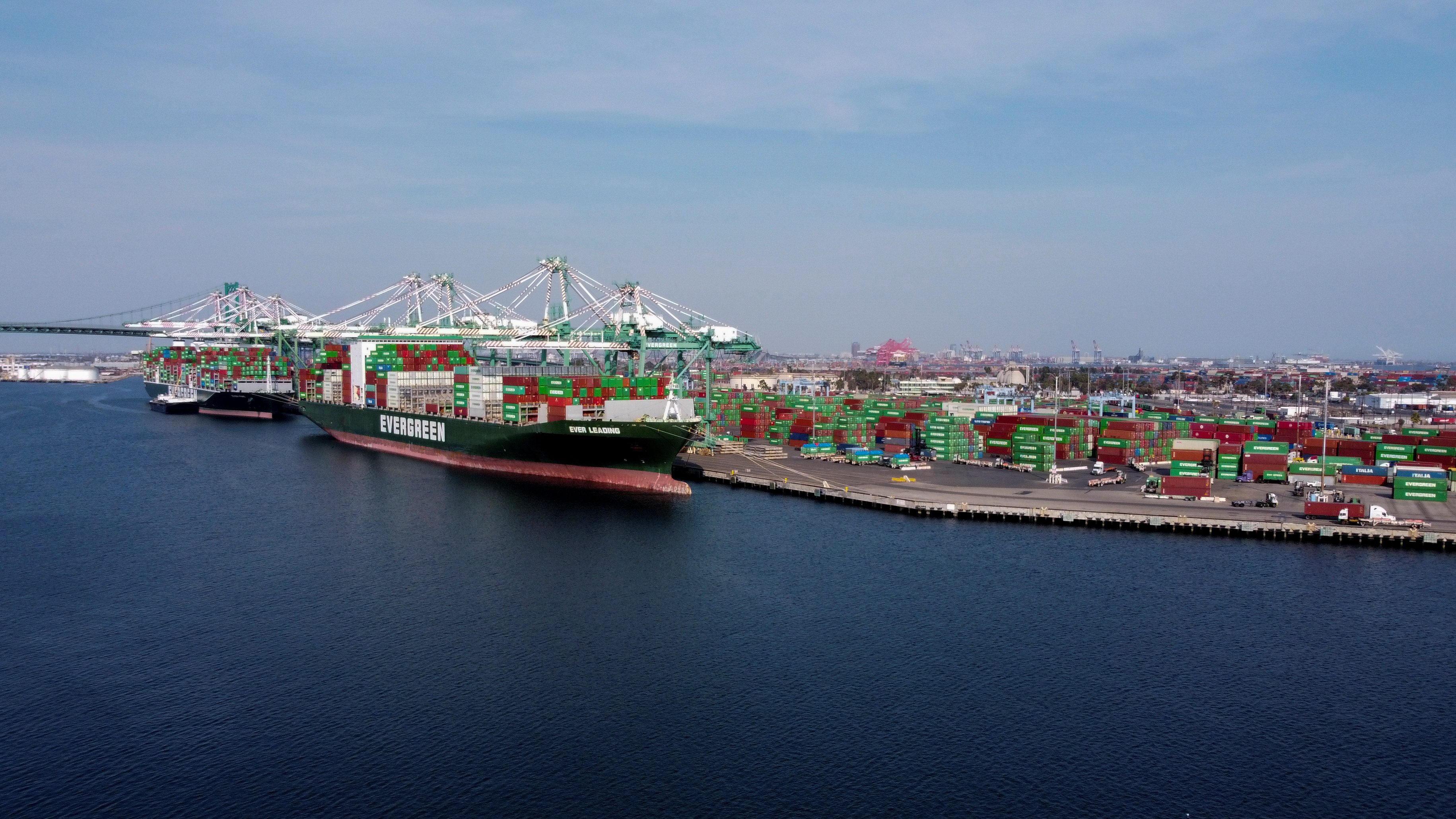 Economist Stephen Roach warned last year that the world is a busted supply chain away from stagflation. Now, 17 months later, the links that bind the global economy together threaten to disrupt Christmas. Conversations about stagflation are on the rise.

As Roach sees it, we’re getting a glimpse of what happens when supply chains are dismantled—we get goods shortages and higher prices, slower expansion in gross domestic product, and, eventually, higher unemployment than we’ve gotten used to. The senior fellow at Yale University says the Biden administration needs to consider those consequences, which look eerily similar to the stagflation of the 1970s, as it aims to yank supply links out of China. He’s not convinced that shortages of everything from computer chips to spare parts for appliances will be fleeting. “It wouldn’t take much to sever some of these really important links, and that is pretty much what’s played out,” he said.

Roach’s perspective is partly rooted in his experience in the 1970s at the Federal Reserve, which was run at the time by Arthur Burns. The Nixon-appointee insisted that the spike in inflation was transitory, Roach says, even as prices shot up at double-digit percentages. Roach sees parallels today at the Fed, where chair Jerome Powell has insisted that a jump in prices is probably temporary, even though inflation hasn’t abated they way central bankers expected it to..

Quartz spoke with Roach, the former chief economist at Morgan Stanley, about his experience at the central bank and whether the Fed chair should be re-appointed. The conversation was edited and condensed for clarity.

Quartz: More than a year ago, you suggested that we might be a supply-chain crunch away from stagflation. Do you think that’s playing out now?

Roach: I wrote this before the supply chains appeared to have broken all over the world. The supply chain, which focuses on efficiency and cost reduction and lower prices, has taken the world by storm. It has played a big role in driving the expansion of global trade, it’s played a big role in holding inflation down for a broad number of manufactured products, and I worried that we were taking that concept for granted and not appreciating the fact that there were political forces to reshore, basically bring production back home out of supply chains, even though that was, I thought, totally impractical and unrealistic.

But the political forces were there, and it wouldn’t take much to sever some of these really important links, and that is pretty much what’s played out. The one thing I certainly did not count on when I wrote about this was that while I focused on the supply side, the big shock relative to the article I wrote, you know, 16, 17 months ago, was this huge snap back on the demand side post-lockdown. So you’ve gotten caught in fragile supply chains coming face to face with a massive snapback on the demand side, and the system just became quickly dysfunctional across the board.

A key question about supply chains is how much of this is transitory and how much will be longer lasting. What is your read on whether we are experiencing a temporary bottleneck or a more permanent reshoring of supply chains?

The conventional view is that, you know, this is all temporary and that we’ll be able to repair the supply chains and the cost pressures—the disruptions that we’re seeing right now will be resolved. And I’m dubious of that.

These are long-term problems that are not easily resolvable, and I pick the comparison to the 1970s for a good reason—it’s because that’s what I remember when I first started out as an economist working at the Federal Reserve. We had one price-problem pop up after another.

And the Fed, especially its chairman at the time, Arthur Burns, who I worked very closely with, dismissed these as temporary aberrational factors that had nothing to do with monetary policy, and forced us to create price indexes that took out the special one-time recurring glitches. And so we actually created something that didn’t exist back then, the first core CPI, where we stripped food and energy out of the CPI. We kept, in Burns’s insistence, taking more things out because more price pressures started showing up in things like used cars and home ownership and women’s jewelry and mobile homes. All sorts of things.

We took so much out, we didn’t have much left and that was still rising, and only then did the Fed and Burns concede that we had an inflation problem. This notion that these things will just fade is something that unfortunately has very painful memories for me back in the 70s.

In your article, I got the sense you were writing about political considerations from, say, the Trump administration to reshore supply chains from China. That desire to onshore critical supply chains doesn’t seem to have gone away.

To the contrary. The Biden administration in June released a voluminous report, sort of a multi-agency review of supply chains. This is not just a Trump administration approach, but a critical focus of their policies. I’ve looked at this report very carefully and it’s extremely well done. But if you look at their recommendations in terms of what is going to be required to rebuild these resilient supply chains, it’s going to take literally decades. It involves things like innovation, investing in a broad and diverse talent pool. And it says nothing, of course, about how trade fits into our broader macro framework of a nation that doesn’t save. And that’s a point I’ve been harping on for a number of years that is just unappealing to the political chattering class in Washington.

In your article you pointed to some interesting research about supply chains and inflation—is this onshoring that you were talking about enough to induce a new era of slower growth and higher inflation?

To a large extent it depends on the way in which policymakers respond to these types of pressures. If the Fed wants to let it rip then we can continue to sustain rapid growth, but the point I made in the article is that that is a recipe for disaster again. It’s a replay of exactly what they did in the 70s, where we compromised the need to take seriously these risks of inflation for the sake of short-term growth.

If we want to reshore, we are going to have to accept slower growth as a price for that.

How likely is stagflation for the US?

I can’t really put a number on it. I think 20% is too low and 50% is too high, so somewhere in the middle there. The Fed has been really reluctant to roll back its special secret sauce that was put in to deal with the global financial crisis and now the Covid shock—the combination of zero interest rates and quantitative easing. It finally conceded that it may have to begin tapering sooner than expected and possibly even, if things get really bad, dare to raise the benchmark policy rate, the federal funds rate.

That’s just an indication of how hard it is for them to let go of the old approach. And if they stay with the old approach, then they’ll continue to perpetuate the risks of a stagflationary outcome.

That’s a fair point. We have learned from that earlier period that you have to be pretty aggressive in terms of the policy response to make certain that we don’t go back to that type of situation. So I think the odds of a late-70s-style stagflation—which is really the example I think that’s most important, and where the inflation rate was at or near double-digit rates for a protracted period of time, as was the unemployment rate—I think the odds of that are low. But to move up from the rock-bottom inflation and the rock-bottom pre-Covid unemployment rate is a distinct possibility.

There’s an argument that the Fed was too focused on inflation in recent years, which could have hurt wages and incomes for some workers. What’s your take on the Fed’s policymaking at the moment?

I think they’ve made a fundamental mistake here, and that is while they’re good at responding to crises, whether it’s the global financial crisis, even the dot-com bubble, or the Covid shock, they’re not good at normalizing after those crises are over, and so they have a bias to stay easy for too long. They have pretty much neutered their ability to use the interest rate as a policy lever, because they keep it at zero or near-zero in perpetuity. So they’ve created this new instrument, the balance sheet, and by shifting from the policy rate to the balance sheet they’re bringing in the risks of asset bubbles and playing a much bigger role in shaping economic risk than they need to.

We saw it very clearly in the early 2000s, and we’re seeing it again right now with asset valuations flying through the roof because the Fed is still largely, even though they’re starting to hedge their bets, maintaining a policy that was set up to deal with the Covid shock.

Is Fed chair Powell still the right person for the job?

He’s done a reasonably good job given the circumstances he had to address. He’s confident, he’s got good respect within the institution and in the markets. The political debate has less to do with Fed policy and sort of more to do with creating the types of opportunities that fit with the agenda of one party or another. And I’m just a big believer that the Fed should be outside the political fray, but that doesn’t happen when these reappointments come up. So I mean, that’s an issue for them to figure out.

What else is on your mind as it relates to inflation, growth, and supply chains?

The concept of the supply chain is really central to the way the world has come together in terms of production and efficiency. And as I said to you earlier, it’s played a very important role in driving the expansion of global trade and holding down overall inflation. And what we’ve done with these supply chains, courtesy of technology breakthroughs, logistics, and cheaper travel is to make them leaner than we ever imagined.

It’s vulnerable to pressures and potential strains and breakdowns and that vulnerability has come through with a vengeance because of the very strong snapback we saw in post-lockdown demand. If we don’t like what supply chains have put on our plate in terms of some of the other pressures that have arisen, then we have to think about the consequences of reshoring and what that means for the way in which we realize these efficiency, inflation, and globalization dividends that have been central to the supply chain.