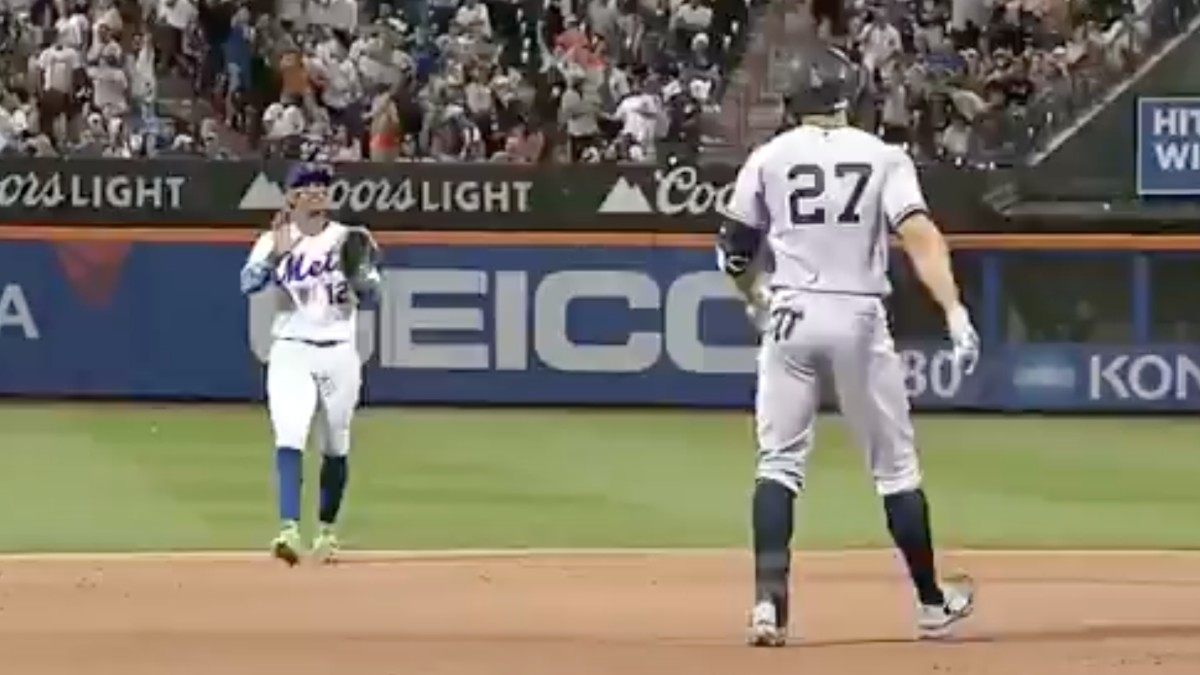 With the Yankees and Mets fighting for their postseason lives, Sunday’s Subway Series finale proved fertile ground for the Big Apple rivals to air out their grievances.

The Mets led, 6-4, with two outs in the seventh inning when Giancarlo Stanton crushed a game-tying, two-run homer off of Brad Hand that Statcast clocked with a distance of 443 feet. While loud contact has become routine for Stanton, this homer quickly became notable for the slugger’s vocal confrontation with Mets shortstop Francisco Lindor as the former rounded second base.

This feud between two of New York City’s biggest baseball stars requires some backstory. During Saturday’s game in which the Yankees scored five runs in the second inning off of Taijuan Walker, Mets infielder Jonathan Villar called a mound meeting because he thought the Yankees dugout was whistling to signal pitches to their hitters, according to ESPN’s Marly Rivera. After notifying Walker that he might be tipping his pitches, Walker retired 16 straight batters following the second inning.

Earlier in Sunday’s game, Lindor appeared to make reference to the alleged sign-stealing. While rounding the bases during one of his three—yes, three—home runs for the game, Lindor mimicked a whistle gesture with his hands while shouting toward the Yankees dugout.

Lindor got the last word in the bottom of the eighth, completing his hat trick by crushing a ball over the right field wall give give the Mets a 7-6 lead that would hold up as the final score.

After the game, Lindor declined to outright accuse the Yankees of using whistling to steal signs, but said that, “something out of the ordinary was going on.”

“It definitely felt that way,” Lindor said, per MLB.com’s Anthony DiComo. “And I took that personal.”

Yankees and Mets fans have had plenty of opportunities for conflict over the years, and this latest entry is unlikely to fade into the background anytime soon with both teams in the midst of scraping for postseason spots. We can only hope to be so lucky as to have each team sneak into the playoff field and go on twin Cinderella runs to give us a second Freeway Series in the Fall Classic.