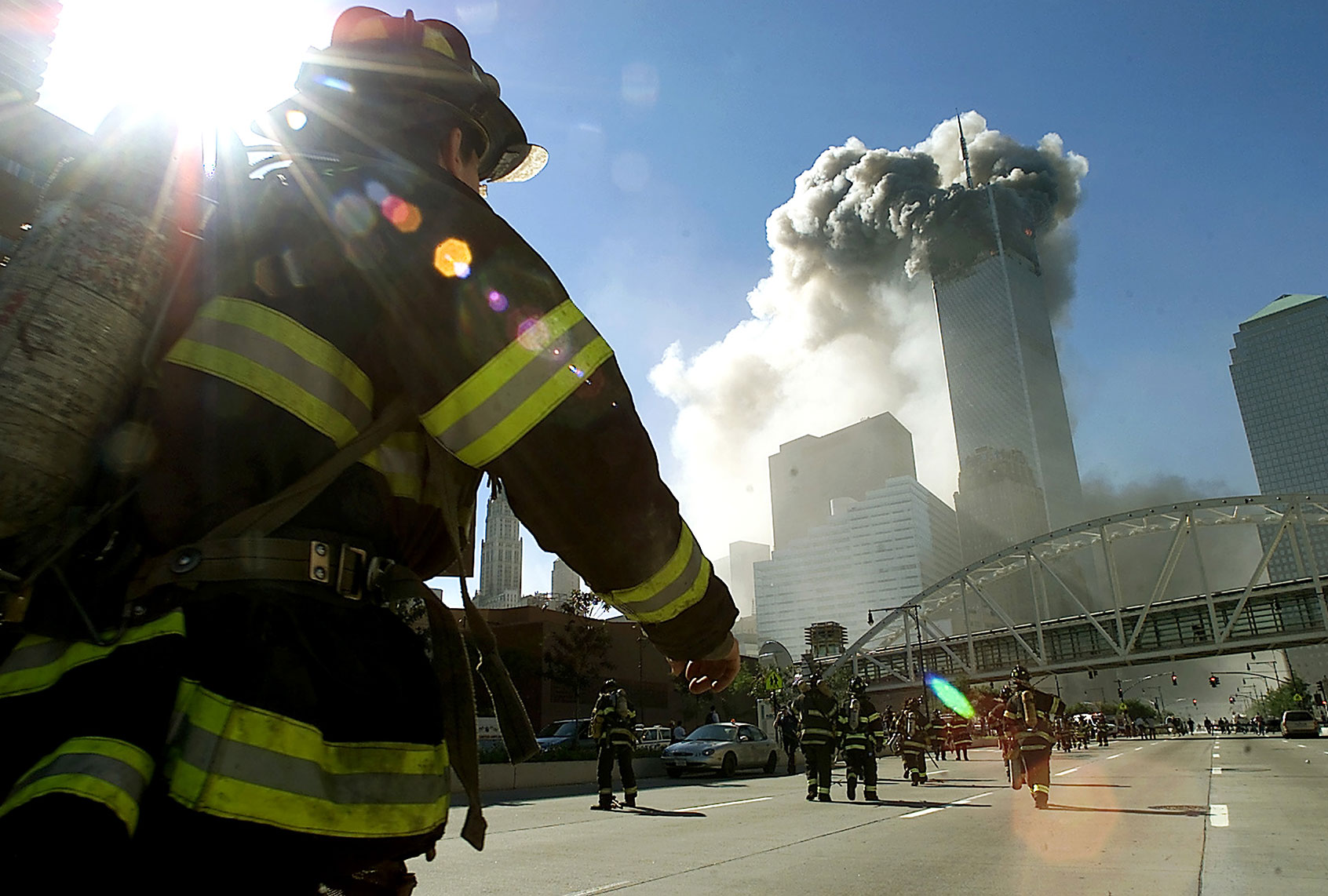 Newspapers and magazine retrospectives of the 20th anniversary of the 9/11 attacks tend to frame the attacks as a discrete event. In their telling, the nation was attacked by terrorists on September 11, 2011. They killed around 3,000 people in one day, who were mourned and continue to be mourned.

The problem with this mainstream narrative is that it frames those attacks as something singular and isolated: they happened, and people died tragically on that horrific day. But that is not the reality lived by hundreds of thousands of 9/11 World Trade Center first responders and survivors. For them, it’s not over: the death toll continues to mount every week since. It will continue to do so late into this century. For them, 9/11 is a 20-year (and counting) ordeal of mass death.

This is the untold 9/11 narrative, in which the United States was attacked; and then, in the days and months after, first responders and the people that lived, worked and studied in lower Manhattan and western Brooklyn were betrayed both by municipal officials and the Bush administration’s Environmental Protection Agency. The reason, of course, relates to money: Officials in both agencies were more concerned amount preserving the pulse of Wall Street than the lungs of close to a half million people, including roughly 90,000 rescue and recovery workers.

Three days after the 9/11 attack, former New Jersey Governor Christine Todd Whitman, then-head of the Environmental Protection Agency, told reporters that “the good news continues to be that air samples we have taken have all been at levels that cause us no concern.”

That upbeat and false statement was uttered as the fires at the World Trade Center site continued to burn and smolder — as they would for months after the Towers collapsed — casting a hazy, toxic pallor over the southern tip of Manhattan that lingered in the lungs of residents.

Undoubtedly, Whitman’s reassurance and the encouraging EPA press releases — along with then Mayor Rudolph Giuliani’s cheerleading — helped Wall Street and lower Manhattan’s businesses and schools re-open so quickly. Within a few years, though, the revelation began to sink in that the danger had not passed. Thousands were becoming sick and dying from their exposure to the unique cocktail of abrasive toxins released by the collapse and fires that followed.

Two years after 9/11, an investigation by the EPA Inspector General found that EPA “did not have sufficient data and analyses to make such a blanket statement” as it did at the time.

The EPA’s Inspector General (IG) found that the CEQ described the readings as just “slightly above” the limit, despite the reality that samples taken indicated asbestos levels in Lower Manhattan were double or even triple the EPA’s limit.

And when the EPA’s IG tried to determine who had written the press releases, they “were unable to identify any EPA official who claimed ownership,” because investigators were told by the EPA Chief of Staff that “the ownership was joint ownership between EPA and the White House” and that “final approval came from the White House.”

The EPA chief of staff “also told us that other considerations, such as the desire to reopen Wall Street and national security concerns, were considered when preparing EPA’s early press releases,” the EPA’s Inspector General continued.

According to a 2008 case study by the Union of Concerned Scientists, the EPA press releases were also vetted by Bush’s National Security Advisor.

“Unfortunately, the agency lacked authoritative information on which to base these claims, and internal agency data conflicting with this reassuring public posture were ignored,” the case study reads. “The EPA’s press releases and public statements after 9/11 were vetted by then-National Security Advisor Condoleezza Rice, suggesting that the White House placed politics over science when communicating about ground zero’s air quality.”

For a number of years after the attack and “clean-up,” which dosed potentially hundreds of thousands of men, women and children with the World Trade Center’s “Drano dust,” the City of New York, then led by Mayor Michael Bloomberg, resisted claims by 9/11 first responders that linked their respiratory diseases and cancers to the lingering toxic air after the destruction of the towers. The Bloomberg denial reached its nadir when, after the death of WTC responder NYPD Detective Jimmy Zadroga, Bloomberg insisted the ailing detective was no hero but had died because he was a drug addict.

It wasn’t until 2006 the official denials stopped. It took a New Jersey coroner to conclude that Zadroga, who had spent weeks on the WTC pile wearing just a flimsy paper mask, had actually died as a consequence of the chronic disease that compromised his vital organs as a result of his post-9/11 WTC exposure to the air Whitman and Giuliani had insisted was “safe to breathe.”

Bloomberg subsequently apologized to the Zadroga family and became a strong advocate for the federal support of what would become the World Trade Center Health Program, an unprecedented collaboration between labor, management and the city’s leading occupational health experts.

More apologies from politicians followed. In 2016, former Governor Whitman told the Guardian she was “very sorry that people are dying, and if the EPA and I in any way contributed to that, I’m sorry. We did the very best we could at the time with the knowledge we had.”

In the two decades since, the toll from toxic exposure to those in proximity to the World Trade Center has continued to mount. Nowadays, experts generally accept that the post-9/11 death toll likely exceeds the almost 3,000 killed in the actual attack and collapse. The FDNY, which lost 343 members the day of the attack, lost 256 since;  three quarters of the 15,000 FDNY responders on 9/11 are saddled with at least one life-altering health condition.

To this day, close to 110,000 first responders and survivors are enrolled in the federally-funded 9/11 WTC Health Program, with many of these participants suffering from multiple diseases and debilitating conditions. While close to 95 percent of the first responders are participating in the 9/11 WTC Health program and getting screened every year, less than 10 percent of the hundreds of thousands of civilians who were present are enrolled in the program. Part of the reason for that is that one must display symptoms before being able to participate in the program.

The WTC Health Program, now in need of additional federal funds, came into being thanks to the militant advocacy of a powerful coalition of public and private unions as well as local community activists. Many of these fierce labor and neighborhood advocates have since died from their exposure at ground zero. Many still struggle with life-altering diseases; many thousands more are beating the survival odds thanks to the program’s holistic care model, which integrates mental and physical health care as well as lifestyle change.

Catherine McVay Hughes, former chairwoman of lower Manhattan’s Community Board 1, which includes the WTC site, remembers being skeptical when former EPA Administrator Whitman proclaimed that air in lower Manhattan was safe. At the time, the fires at the WTC site were still burning; they would not be fully extinguished until just before Christmas.

But Hughes, who serves on the WTC Scientific/Technical Advisory Committee, said that it was taboo at the time to raise such concerns.

“First of all, I am one of the most patriotic people out there,” said Hughes, who was speaking only as a longtime member of the community. “But questioning whether or not the air was safe to breathe back then was perceived as almost being unpatriotic; and nowadays, there’s scientific studies indicating how toxic and dangerous it was.”

Twenty years out, I can’t help but feel that history is repeating itself. There are alarming parallels, then and now, between what happened to WTC first responders and what we see today with essential workers amid the pandemic. Today, the CDC plays the role the EPA played then — particularly with the CDC’s shifting guidance about the need for masks that characterized the early, anxious months of the pandemic.

And substitute Giuliani’s maniacal push to be “open for business” as the WTC continued to burn for Trump’s willful deceit about the pandemic, followed by his crime against humanity when he pitted red state against blue state to gain partisan advantage.

That cynical ploy continues to kill Americans to this very day.

And now, just as back in 2001, workers for the unions that represent first responders are cognizant of the situation on the ground in a way that politicians aren’t. Long before a public health emergency was declared in New York City for the COVID-19 pandemic, TWU Local 100 subway workers with the Metropolitan Transportation Authority started wearing face masks. They were threatened with being written up by managers who said the mask was not part of their official uniform and that they were frightening riders.

Similarly, the CDC advised healthcare professionals early on that they should ignore existing workplace requirements that they dispose of their N-95 masks after each clinical encounter and keep the same mask for days at a time because of the lack of PPE.

The nation’s nurse unions warned that the watering down of these occupational health protections would result in them dying, their families getting COVID, and the hospitals where they worked becoming vectors for the disease. All three things happened.

Then in May of this year, the CDC struck again when they unilaterally lifted the universal mask mandate for the vaccinated even as vast swaths of the nation were unvaccinated. And once again the unions sounded the alarm that the move was premature, put them at risk, and could spark yet another devastating surge of the virus.

Even as our nation attempts to weather the latest Delta surge, we have still not come close to assessing the long-term health consequences for the millions of essential workers who put themselves and their families at risk to serve society. We know, based on multiple health studies that as many as 25 percent of the people who experienced a bout with COVID will have long term health consequences of varying severity.

Thanks to the reporting of the Guardian newspaper and Kaiser Health Care, we know that at least 3,700 health care workers and professionals who died as a consequence of their COVID exposure. We know that by almost a three to one margin they were people of color.

According to the National Fallen Firefighter Foundation, the number of public safety employee COVID deaths has jumped from 15 in July to 43 in August. All totaled, since the start of the crisis, 483 police officers, 149 firefighters and 78 EMS members have died from the virus, for a total of 737.

The death toll of 9/11 attack was worsened by government deceit. Likewise, we must never forget just like the government’s missteps in battling COVID that continue to exact such a heavy human toll on our essential workforce.

But mercifully, in the World Trade Center Health Program we have a model for COVID survivors that can help heal this workforce, and in the process learn more about how we can make workplaces safer for workers and the public in future pandemics.

In doing so, we will be affirming their value and honoring their service in a way that will be tangible and enduring.

More from Salon on the 20th anniversary of September 11: