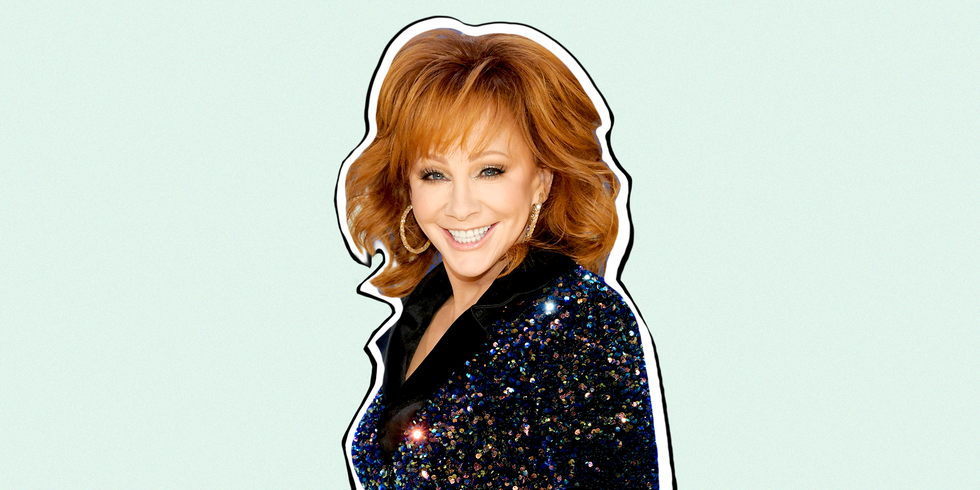 This summer, it was impossible to scroll TikTok without running into it—a man changing the toilet paper roll by himself. A woman pumping her own gas. A teenage boy locking the door as his parents leave the house, then sitting down exhausted, with only the energy to light a candle. What each of those videos have in common with one another? Someone doing the bare minimum, soundtracked by the lyrics: A single mom who works too hard / who loves her kids and never stops / with gentle hands and the heart of a fighter / I’m a survivor.

The real ones know those lyrics as the theme song to Reba. The real real ones know it as the lead single from Reba McEntire’s Greatest Hits Vol. III: I’m a Survivor. But this summer, “I’m a Survivor” was the latest in a string of country tracks that caught fire thanks to social media. Cuts like Walker Hayes’s “Fancy Like” and George Birge’s “Beer Beer, Truck Truck,” which both appeared on TikTok with their own signature dances created by users, have helped launch career highs for burgeoning country stars while Brooks and Dunn’s “Neon Moon” has reentered the Billboard country chart 29 years after its original release, thanks to a routine developed on the platform.

But they’re no Reba. “I’m a Survivor” reached #2 on Billboard‘s TikTok Viral Songs chart after users began soundtracking it to their summers. That may seem like a very particular accomplishment until you consider that it’s the same platform that launched Lil Nas X’s “Old Town Road” and Doja Cat’s “Say So.” Social media has come out of the Reba Closet, recognizing the red headed queen of country as one of the rare unifiers in pop culture. And 20 years after its original release, “I’m a Survivor” is her inauguration song, embraced by Black Twitter, Gen Z TikTok, and just about every other niche corner of the internet imaginable.

“I think the boundaries have been dropped,” McEntire says over the phone in October. “[Country is] not made fun of. Years ago, they were like, ‘You like that hillbilly music?’ Now, I don’t know. I guess it kind of got hip and everybody accepted it more… You just can’t ignore it.” She’s right. The “Neon Moon” remix of Brooks and Dunn from DJ Noiz is featured in 1.6 million videos on TikTok. It’s like a time machine went and brought back a handful of favorites. But there’s a ubiquity to McEntire’s presence that feels wider and more far-reaching. “I’m a Survivor” didn’t conjure a dance craze so much as it resurfaced a shared memory.

“When it started on TikTok, Justin McIntosh [McEntire’s VP of Creative and Marketing] came in there and said, ‘Oh, we’re going have to get a part of this.'” McEntire remembers. “We were out at the farm and we have two donkeys, Poncho and Lefty, and so my boyfriend, Rex Linn, directed it and had me coming up and talking to the donkeys… They just turned their butt to me. I looked at the camera and said, ‘I’m a Survivor.'”

The fervor also extends past that specific platform. This summer, McEntire trended on Twitter for no other reason than fans wanted to voice their love for her work. Her 1990 classic “Fancy” was featured on an episode of RuPaul’s Drag Race. There’s also a weird meme about how much McEntire loves corndogs. It’s as if McEntire has done that inexplicable transition from country recording artist to pop culture touchstone; she now occupies the same cultural space as Dolly and Elvis and Cher. The single-named wonders who have transcended their own libraries.

With the ongoing excitement, McEntire’s team and Universal Records’ president Cindy Mabe came up with an idea: bring Reba’s catalog into 2021 by taking her greatest hits and reworking them with new arrangements. What resulted was Revived Remixed Revisited, a three-album set that consists of rerecorded, stripped back, and remixed versions of past favorites. At first, McEntire was a little skeptical. “[With] “I’m a Survivor,’ I just didn’t know how that was going to go over as a dance mix,” she says. “But you got to try it.” McEntire’s team wanted to give a nod to some of the audience that brought the single back to life, so they enlisted LeahAnn “LAFEMMEBEAR” Mitchell to remix it.

LAFEMMEBEAR came into the fray via her friend, Mya Byrne, who, like Mitchell, is a trans woman who has been a Nashville music scene player for years. She turned around the remix in two days, opting to honor the song’s country roots by overlaying steel guitar and mandolin over the original cut. “I’ve been studying country music, for this moment, since I was eleven-years-old,” Mitchell says over the phone with a laugh. “I’ve been watching Reba forever. It’s funny because everyone was like, ‘This is so left field for you,’ and I said it actually isn’t at all. I grew up watching Reba with my mom and sister all the time. Just because you see one side of me, don’t box me in, baby. Don’t box me in!”

A combination of a mainstream, flame-haired country queen and an up-and-coming Black, trans woman remixing a Reba classic may not seem like the most likely fit, but LAFEMMEBEAR said that the response has been a beautiful barrage of compliments, coming from all walks of life. “It’s been really nice that [Reba’s] not overly leaned into that. It just happens to be part of my truth. Yes, I’m a Black trans woman, but I love country music, and I’m a technical nerd,” she says. “Country music is really just R&B music for white folks. The very first time I heard ‘Let Me Let Go’ from Faith Hill? That’s an R&B song.” The new takes on old favorites has paid off. The album debuted on the all-genre Billboard 200 albums chart at 91 and the Country Albums chart at 12 following its early October release.

The songs make McEntire’s catalog feels more expansive. The remixes feel like TikTok fodder for months to come—engineered for an audience queerer and younger and more diverse than those who claimed the Reba fandom before. The updated epic “Does He Love You?,” originally a 1990 piano power ballad, now sounds like a gay fantasia of the late 80s. The stripped down version of the same song reimagines it as a parsed-down duet, featuring country music’s other patron saint of good feelings, Dolly Parton. The songs meet McEntire, 66, where she’s at. Thirty years out from some of these hits, she has a different perspective recording them. “Does he love you? Well, maybe he doesn’t love me either,” she says with a laugh, referring to formally traditional romance themes on songs like “Does He Love You.” “You want to go to dinner? I’m over that.”

As for this surge of online love for McEntire and the adoption of country music on TikTok, she is as surprised as anyone else. McEntire is known for her story songs—tracks with music videos that can go upwards of eight minutes, with full plots. That’s not the mode of country music anymore, what with so many of the genre’s popular hits being stadium-sized refrains refrains. “Our attention span is so much shorter,” she says. “Mama always said I had the attention span of a four-year-old. I think that’s why TikTok is so popular. It’s short, it’s fast, and then you go to something else.”

As for whether the videos and memes and fanfare will translate to a shift in how country music and its stories will be told? That’s yet to be seen. “‘Fancy’ is a four, five minute song. I don’t know that if we could ever go back to that,” she says, with a pause. “I sure wish we could.” But if anyone were able to stretch those attention spans again and get an upcoming generation to revisit the equivalent of country music epic tales, it’s Reba. After all, she’s the survivor.