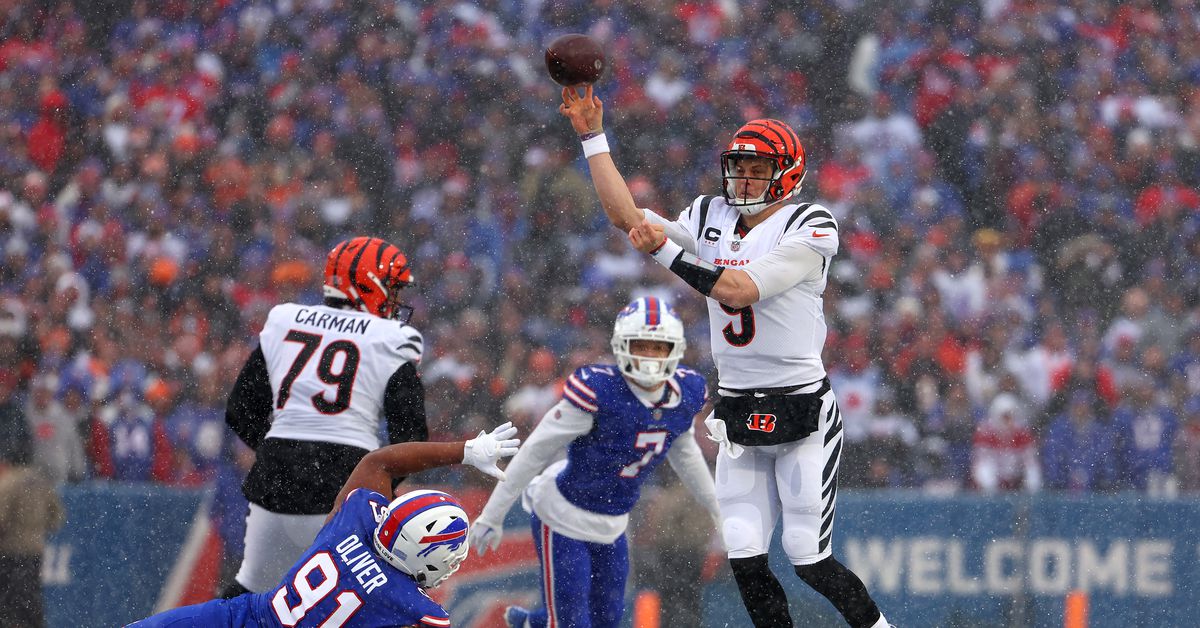 The Cincinnati Bengals became the first road team to prevail in the 2023 Divisional Round, toppling the Buffalo Bills in the snow in a surprisingly one-sided 27-10 victory.

While the story of this game is undoubtedly the stellar performance by the Cincinnati defense on Josh Allen and the Bills offense, the tone was set early by quarterback Joe Burrow.

In the first half, Burrow was 18/27 for 186 yards and a pair of first quarter touchdowns to Ja’Marr Chase and Hayden Hurst. A Bengals offensive line beset by injuries only allowed one sack, and was helped by Burrow being decisive with the ball and getting it out quickly and in rhythm. He finished the afternoon 23/36 for 242 yards, with two touchdowns, 31 rush yards, and no turnovers. Cincinnati’s offense racked up 30 first downs and 412 total yards, converting 6/10 on third down, and only punted two times.

What Burrow and head coach Zac Taylor have managed over the past two seasons is already the greatest stretch in franchise history. This is the fifth playoff win for this head coach-quarterback combo, matching the number of postseason wins the Bengals had from 1970 through 2020. A team that had never won a playoff road game prior to last season just picked up its third in as many tries. Taylor won just one of his first 16 road games as head coach, he’s won 14 of his last 20 (playoffs included).

These are not your same ol’ Bungles. Three decades without a playoff win has given way to a level of success that the team has never experienced in consecutive seasons. It’s a new, exciting era in “The Queen City” and they are just a win against the Kansas City Chiefs away from returning to the Super Bowl for the second consecutive year. As Burrow told CBS’ Tracy Wolfson in the post-game interview, “the job’s not finished.”