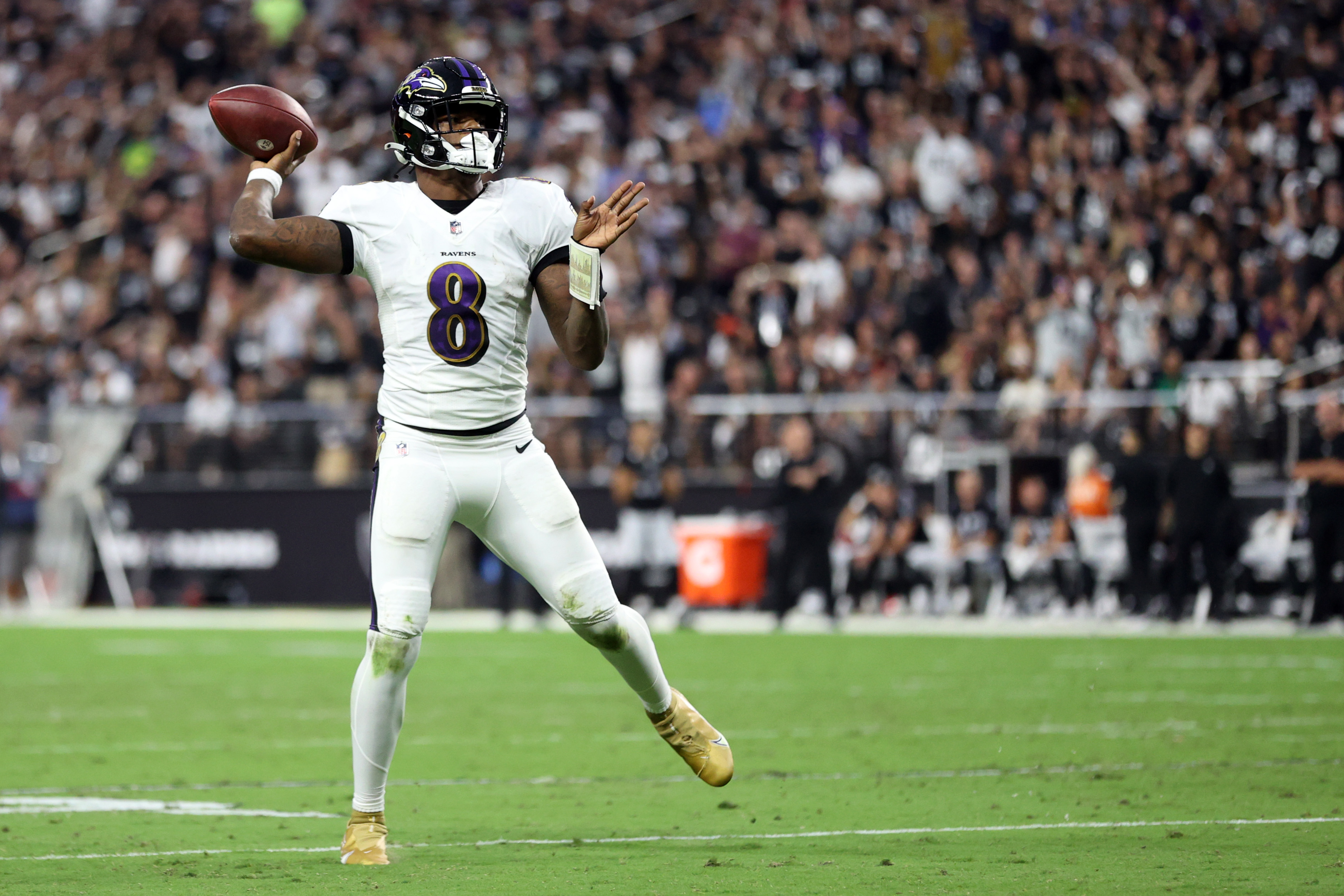 The Las Vegas Raiders wasted no time getting into the win column for the 2021 campaign, and they did it in dramatic fashion.

Las Vegas defeated the Baltimore Ravens 33-27 in overtime in Monday’s AFC showdown at Allegiant Stadium. It is a game that will not soon be forgotten, as the Raiders initially celebrated on the field when they thought Bryan Edwards scored on a deep ball only for it to be overturned.

They then failed to convert 1st-and-goal from the 1-yard line thanks to a false start and Derek Carr interception but got the ball back when Lamar Jackson lost a fumble. Carr left little doubt the second time around and found a wide-open Zay Jones for the winning touchdown to cap off an incredible sequence.

WHAT A PLAY BY BRYAN EDWARDS 😱

RAIDERS THROW A PICK IN THE END ZONE

The result was a 1-0 Las Vegas squad that is looking for its first winning season since the 2016 campaign.

Few quarterbacks are under as much pressure as Carr this year.

On the one hand, he is a three-time Pro Bowler who threw for more than 4,000 yards in each of the last three years. On the other hand, he was just 25-38 as a starter the past four seasons.

The good and bad were both on full display Monday, as the team’s most explosive play of the first half actually came when backup quarterback Marcus Mariota broke free on a run. It seemed as if the Las Vegas offense was going to be nonexistent with Baltimore’s defensive playmakers like Patrick Queen and Marlon Humphrey setting the tone.

Josh Jacobs helped change that some with two touchdowns, although he averaged just 3.4 yards per carry. Instead, it was Carr finding a rhythm down the stretch that flipped the switch on the game.

Derek Carr did his thing. #RaiderNation

Josh Jacobs muscles one in for the Raiders TD 💪

He floated a perfectly placed deep ball to Henry Ruggs III to set up a game-tying touchdown to Darren Waller in the final four minutes of regulation. He directed the Raiders down the field in less than a minute to set up Daniel Carlson’s 55-yard field goal that forced overtime. And he unleashed not one, but two, clutch deep balls in overtime with the second one winning it.

Still, that overtime was filled with apparent mistakes from Carr. The Raiders moved back from the 1-yard line when he went with a hard count that caused a false start, and then he compounded it by putting far too much zip on the ball on the Anthony Averett interception in the end zone.

Fortunately for the Raiders, he got another chance after that. And he took full advantage of it.

Injuries were the biggest storyline for the Ravens during the preseason, and the side effect of losing J.K. Dobbins and Gus Edwards was an even bigger spotlight on Jackson.

After all, opponents will game-plan around stopping his electrifying runs and forcing him to throw throughout the season, and doing so figured to be easier without also having to worry about Dobbins. Ty’Son Williams must have missed the memo because he provided his quarterback with immediate help with 87 total yards in the first half, 35 of which came on a touchdown run.

Williams’ early success forced defenders to hesitate for an extra moment, which is all Jackson needed to find openings in the aerial attack. He took advantage of one by finding Marquise Brown for a touchdown and was more of a threat with his arm than his legs as Baltimore built a 14-10 halftime lead.

THE RAIDERS GET ANOTHER CHANCE.

Raiders defense clamps up to force the fumble 🔒

Lamar said “That’s On Me”. Accountability. Love it!

Lamar Jackson threads the needle on this TD 🎯

Ty’Son Williams bursts through for the Ravens’ first TD 💪

Lamar is taking this game into his own hands. #RavensFlock

The quick start faded, though, as Baltimore’s offense stalled when Jackson missed multiple throws—including one to a wide-open Williams in the flat—and Maxx Crosby led the effort up front for the Raiders defense.

Las Vegas flushed Jackson out of the pocket multiple times, and few were more costly than when he lost a fumble while nursing a seven-point lead in the fourth quarter. That turned into seven points the other direction and dialed up the pressure on an offense that appeared to be wilting.

He deserves credit for responding to the turnover in regulation by setting up a Latavius Murray touchdown with a perfectly placed deep ball to Sammy Watkins on the ensuing possession. He also used his legs on a drive that resulted in Justin Tucker’s go-ahead field goal in the final minute.

But it was his lost fumble after his team got an unexpected second chance in overtime that was the final dagger for Baltimore’s chances.

Both teams will face AFC contenders in Week 2 when the Raiders are at the Pittsburgh Steelers and the Ravens host the Kansas City Chiefs.