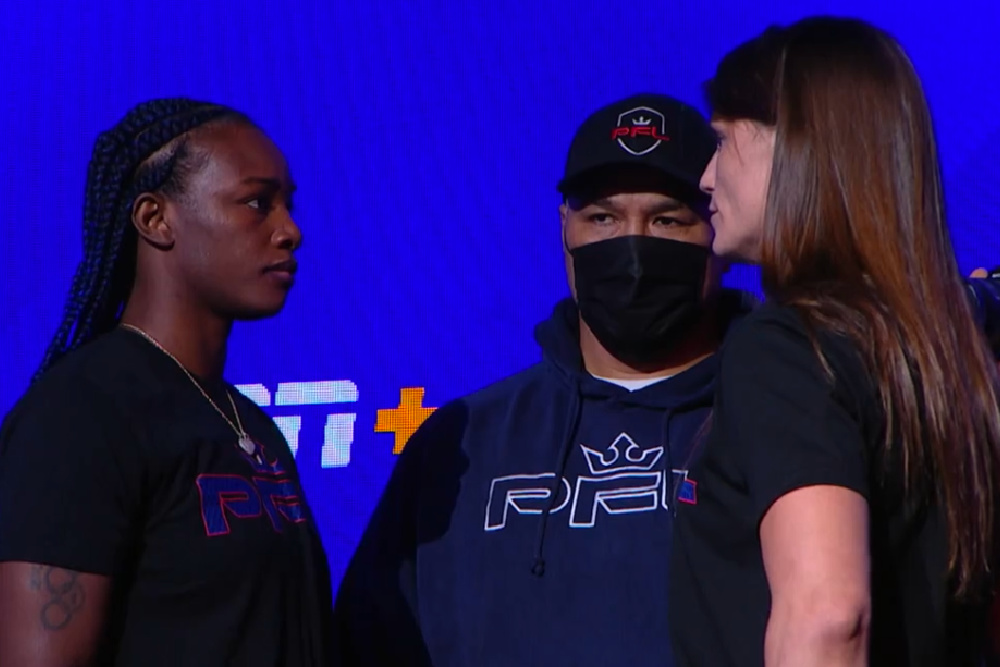 Claressa Shields is brimming with confidence going into MMA debut on Thursday at 2021 PFL 4.

Shields (0-0), a two-time Olympic gold medalist and multi-division boxing champion, will finally step into the cage for her highly anticipated debut when she meets Brittney Elkin (3-6) in a women’s lightweight bout at Ocean Casino Resort in Atlantic City, N.J. The main card airs on ESPN following prelims on ESPN+.

Since deciding to make the crossover from boxing in 2020, Shields has put in more than six months of training to get to this point. All eyes will be on her to see the performance, but Elkin has no intention of rolling over for the self-proclaimed “GWOAT.” She intends to play spoiler.

“I’m here for the upset,” Elkin told reporters at Tuesday’s 2021 PFL 4 pre-fight press conference. “I’m just really excited about this matchup. I think the first round is going to be a lot of feeling each other out. I think we will both probably give our best in that, then I predict we will go to the second round and I will probably get the finish.

“I’ve been in fighting for 12 years and this is definitely the biggest match I’ve been in. This would be a dream to cause the upset, so I’m just excited.”

Elkin’s comments did not sit particularly well with Shields, who sees through her opponent’s demeanor. Shields doesn’t think Elkin has what it takes to thrive in this spot, and intends on showing that while there may be a difference in MMA experience, there are many more factors that will change the game on fight night.

“I want to tell Brittney that she doesn’t sound confident in nothing that she’s saying,” Shields said. “First it was supposed to be 15 seconds (to finish me), now it’s going to be the second round. Truth is, Brittney Elkin gonna lose. Period. I’ve been in training camp for seven months at the Jackson-Wink MMA camp, training with some heavy hitters. Arlene Blencowe, Holly Holm, Jonny ‘Bones.’ I’ve put in a whole lot of time, and I didn’t come to the PFL just to have my beautiful record in boxing, and all my accomplishments derailed by somebody who is not even really a serious fighter.

“I’m not even about to pay her attention for all this, she’s going to knock me out or submit. me. I’m an athlete, I’m a fighter and as much as anyone up here on this panel, I’m an MMA fighter like y’all. So don’t count me out just because Brittney has been in MMA for 12 years and hasn’t been great at anything except for jiu-jitsu. I’m an all-around great athlete, great person and I’m just getting ready to get in there and shutting up all this stuff about grapplers being able to beat boxers. I’m not just a (boxer), I’m an MMA fighter now. Just accept it.”

Elkin said she is not fazed by Shields’ brash attitude toward her. She may be the quieter of the pair when speaking the media, but said none of that is going to matter once they get into the cage.

“I think she always talks like that, so it doesn’t bother me,” Elkin said. “I’m very confident too, I just don’t need as many words to explain myself. Sometimes I just let it go cause I just want to show what I can do in there, and I just need to say less to do that.”