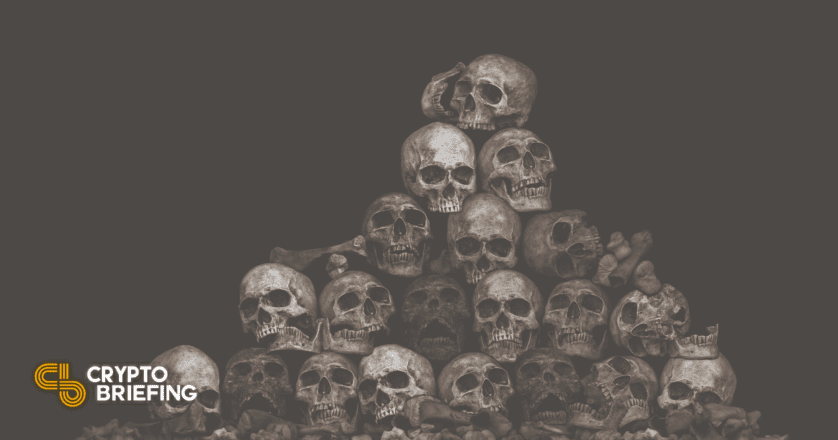 Gary Vaynerchuk and other NFT influencers have helped bring attention to the CryptoSkulls collection.

Ethereum archaeologists are rushing to dig up digital skulls.

The CryptoSkulls NFT collection is experiencing a major resurgence and is currently the top collection on OpenSea in trading volume. It’s traded 4,233 ETH in the last 24 hours, surpassing popular collections like Bored Ape Yacht Club and Art Blocks Curated. Trading volume is up over 265,000% in the last week.

CryptoSkulls is a collection of 10,000 NFTs living on the Ethereum and Polygon blockchains. The artwork for each NFT is unique, featuring a pixel art digital image of a skull. It’s one of many avatar projects, similar to the likes of Bored Ape Yacht Club and Cool Cats that took flight last year. However, CryptoSkulls launched back in 2019, making it one of the earliest avatar projects on Ethereum. Such collections are popularly referred to as “avatar projects” as NFT enthusiasts often like to use the characters featured in their NFTs as their social media avatars. As such, NFT fans often view their digital characters as part of their online identity.

The cheapest CryptoSkulls were trading at 0.05 ETH Saturday, the equivalent of just over $160 at press time. The collection has since seen over 9,000 sales on OpenSea, pushing the floor price up to 0.9 ETH, or around $2,900. Interestingly, several cheaper skulls are listed at 0.05 ETH on Rarible, though the contract appears to be different to the collection on OpenSea. Crypto Briefing tried to buy one of the NFTs on Rarible and received an error message.

One reason for the surge may be the attention the collection received from several high-profile collectors. NFT Now co-founder Matt Medved, a self-described “NFT archaeologist” Leonidas, and Gary Vaynerchuk have all taken to Twitter to note the collection’s sudden rise in the last 24 hours. Vaynerchuk is particularly influential: he has over 2.8 million Twitter followers and is known to have caused similar market frenzies for other collections in the past. The popular entrepreneur became increasingly immersed in the NFT space in 2021 as the technology went mainstream; he’s known to have a collection of hundreds of NFTs including more than 50 CryptoPunks.

Besides the influencers shining a spotlight on the collection, its historical status likely makes it more appealing to many collectors. Early Ethereum NFTs have traded at large premiums in recent months as the space has grown in popularity. One of the most prized NFT collections, CryptoPunks, jumped in value last year partly because it launched in 2017, years before most other avatar projects emerged. A period of mania in the market that became known as “NFT summer” also saw other historical collections soar in value. Perhaps the most notable development during the frenzy was the growing demand for the ultra-scarce 2017 collection EtherRock, whose 100 “pet rocks” soared in value as collectors started to seek out archive NFTs. At the beginning of NFT summer, the cheapest EtherRock cost about $5,000. Within a month, the floor price was over $1 million. CryptoSkulls is much less scarce with 10,000 NFTs in the collection, so even after today’s surge of interest, they won’t likely be trading for seven figures anytime soon.

Disclosure: At the time of writing, the author of this feature owned ETH and several other cryptocurrencies.

An early NFT project called EtherRocks has soared in value this weekend, with the floor price more than doubling in 48 hours.  EtherRocks Sell For $100,000 EtherRocks is the latest…

Prices for in-demand NFTs like CryptoPunks, Autoglyphs, and Fidenza have hit record highs this weekend, while projects like Axie Infinity have exploded in popularity over the last few weeks. Is…