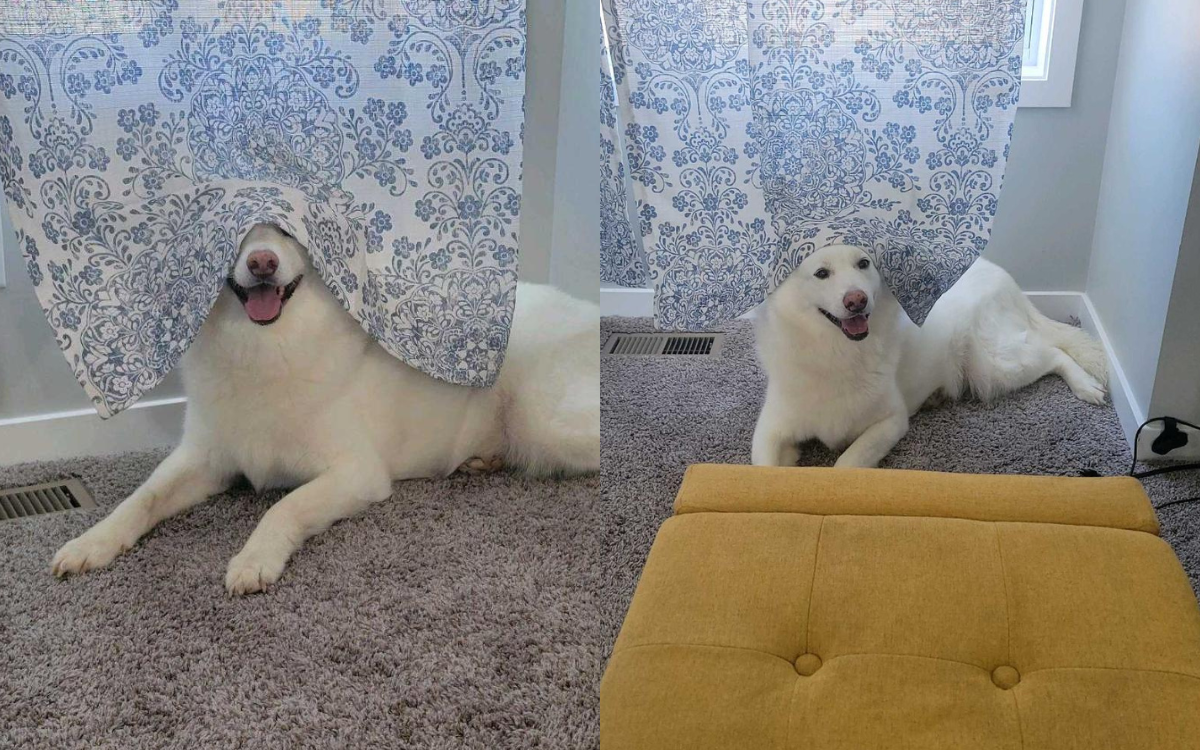 It’s been another memorable week for pets online, with stories covering everything from one very naughty dog caught raiding his owner’s trash can after getting the lid stuck around his neck to a doting “cat dad” comforting a Golden Retriever puppy.

However, the true highlights of the week came courtesy of our readers, who have been busy sending in pictures and stories about their adorable pet companions. Picking a winner is never easy but this week’s Newsweek Pet of the Week award goes to a very special pooch who caught our eye with his unique approach to staying cool during the heatwave.

Remember, if you would like your pet to be a star on Newsweek, scroll down to the bottom of the story to find out how to get involved.

This week’s winner is Ghost, a creative canine who was rescued from an animal shelter when he was just 7 months old. The ASPCA estimates that around 3.1 million dogs enter animal shelters every year. Of that number around 2 million will end up being adopted.

Ghost was one of the lucky ones, having caught the eye of the brother of owner Natalie Cameron who then decided to give him a shot at a new life in a forever home. Now at the ripe old age of 9, Cameron told Newsweek that Ghost is a beloved member of the family who, like any of us, comes with his own unique eccentricity.

In the case of Ghost, it’s his penchant for staying cool. Ghost likes to stay out of the sun in a special “cool spot” he found in the house last year. “He also likes to lay on the a/c vent or in front of a fan,” she said. “He also loves riding in the car with his head out of the window.”

Ghost is currently residing with five human companions and a fellow canine. Cameron says that when he’s not chilling out, Ghost also “enjoys running in his big backyard chasing squirrels and birds.”

“Fortunately he’s yet to catch any,” she adds. Come evening time, he likes nothing more than to cuddle up with his family and his favorite stuffed pink elephant for a well-earned rest.

Affectionately known as “Flying” Loreal by her owners Mike and Sharron Kantor, this graceful greyhound came in a close second this time around but still ranked among the finalists.

Loreal turned 5 in July but is wise beyond her years, having come to the Kantors after a busy career as a greyhound at the dog track in Arkansas, where she racked up 109 race appearances.

Upon retiring from the sport, Loreal took up an altogether different challenge after being adopted through the Greyhound Pets of America initiative.

“We adopted Loreal two weeks after we lost our Great Dane, Kloee,” Mike Kantor told Newsweek. “She fit in with my wife and me from the moment we got her home and has been a great companion every day since.”

Like many greyhounds, Loreal suffers from corns on her feet, which can make walking on hard surfaces difficult. It’s an entirely different story ,however, when they get her on grass.

“We take her for two walks daily, besides time in her yard. As soon as my wife starts to get ready for our walks,” Kantor says. “Loreal goes ballistic with joy, as she really likes her long walks.”

“I cannot recommend greyhounds as family members highly enough,” Kantor added. “They love walks, being petted, being allowed to sleep, and just being members of the family.”

Another finalist comes in the form of Pache, an adorably cute pet pooch whose name, owner Tiffany Walton says, is derived from pace, the Italian for “peace.”

However, his excited demeanor in the picture provided suggests “peace” is the last thing anyone is getting around this four-legged friend.

Last but definitely not least, there’s pet owner John Hazlett’s happy family of cats Ernie and Mama, along with their doggy sibling Lolly.

Cats and dogs don’t always get along, but this trio appear happy to coexist and vie for their owner’s affections on a daily basis.

Ernie and Mama certainly appear close, with their affectionate relationship a welcome sight for any cat owner. Lolly, meanwhile, cuts a decidedly cute figure in the image provided, which is just as well considering they are seriously outnumbered.

Do you have funny and adorable videos or pictures of your pet you want to share? We want to see the best ones, and they might even make it into our Pet of the Week! Send them in to life@newsweek.com and they could appear on our site.