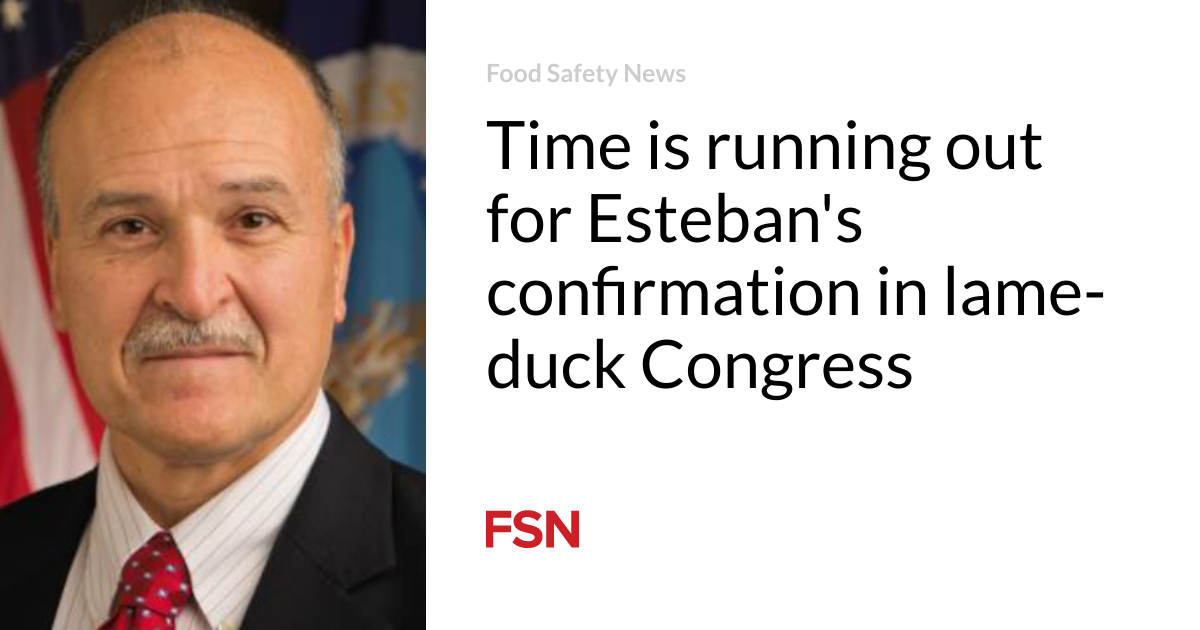 When you’re waiting to be confirmed by the U.S. Senate, hearing that your nomination has been taken hostage with others is not good news. But for Jose Emilio Esteban, who the president has nominated as USDA’s next Under Secretary for Food Safety, that’s the reality of the situation.

Although the Senate is now and will in the future be controlled by the president’s party, Esteban and three other USDA nominees are so far being denied confirmation votes on the floor of the Senate.

Why the Democratic majority in the Senate is holding up its own President’s nominees is a mystery. President Biden nominated Esteban to the top food safety position in the federal government on Nov. 15, 2021, and the Senate Committee on Agriculture, Nutrition, and Forestry favorably recommended his confirmation on Sept. 27, 2022.

The Senate has until Dec. 22nd to complete its floor business for the current congressional session. That’s just one month from today.

Esteban’s confirmation was placed on the Senate calendar shortly thereafter for a vote that could occur on any day, but that 10-minute exercise has not yet occurred. The delay, including other USDA appointments, has some thinking Esteban’s nomination may not happen before the current lame-duck Congress runs out.

The Senate returns nominees to the White House if they are not confirmed. Then the president must decide whether to re-submit that nominee or send someone else’s name up to the Hill. When the president cannot get his nominee confirmed, there are a couple of options.

When President Obama could not get Al Almanza, USDA’s former Food Safety and Inspection Service administrator, confirmed as, Under Secretary for Food Safety, he named him as deputy Under Secretary and left the top job open. Deputy appointments do not require Senate confirmation.

When President Trump did not get Mindy Btrshers confirmed before the Congress expired, he just re-nominated her to the next one. Until she was confirmed, the top job was also left open while she served as deputy Under Secretary for Food Safety.

If President Biden opts to use the deputy option, which he would probably do only if the Senate became truly transient, his appointment of Esteban as deputy would be his second. Sandra Eskin has served as USDA’s Under Secretary for Food Safety since March 2021.

When there are two deputy undersecretaries for food safety, under the rules, the one with career rank would be granted “oversight authority” and would be designated as the one in charge. “Of course, that’s Emilio in this scenario,” according to a federal food safety expert.

Esteban’s career service is with FSIS, where he is currently the chief scientist. Eskin left the Pew Charitable Trusts for the federal posting in 2021. Almanza and Brian Ronholm were the last duo serving as deputy undersecretaries.

Why the Senate is holding up confirmation votes on any of the USDA appointees remains a mystery. There’s speculation that Stacy Dean, who has yet to get a confirmation hearing, will face hostile questioning about the infant formula shortage, but that’s about it in terms of information about the pending nominees.

USDA’s Under Secretary for Food Safety is a post requiring presidential appointment and Senate confirmation. Yet, since it was established in 1994, the position has been filled for barely about half the time.

It was intended to elevate food safety within USDA and the federal government at large.

If confirmed, Estevan will be the sixth to hold the position. In addition to his predecessor, Mindy Brashears, four others have held the office: Dr. Elisabeth Hagen from August 2010-December 2013; Dr. Richard Allen Raymond from July 2003-January 2009; Elsa A. Murano from October 2001 -December 2004 and Catherine Woteki from July 1997-January 2001.

Before joining the USDA, Esteban worked at the Centers for Disease Control and Prevention as an epidemic intelligence service officer, staff epidemiologist, and assistant director of the food safety office.

He serves as the chair of the Codex Alimentarius Commission Committee on Food Hygiene. This committee helps define food hygiene standards for international trade. Esteban also works as vice president of the International Association for Food Protection.

Dr. Esteban trained as a veterinarian in Mexico. He holds an MBA, a master’s degree in Preventive Veterinary Medicine, and a Ph.D. in Epidemiology from the University of California-Davis.

His year-long wait aside, Esteban is seen as an eventual shoo-in.

“Dr. Esteban is well respected and well qualified to lead the food safety mission at the Department,” said Julie Anna Potts president and chief executive officer of the North American Meat Institute (NAMI). “A veterinarian and an epidemiologist with decades of experience at USDA, Esteban is uniquely qualified to ensure sound science drives food safety and public health decision-making.

“We urge a swift Senate confirmation to ensure Dr. Esteban can assume this critical role without further delay.”