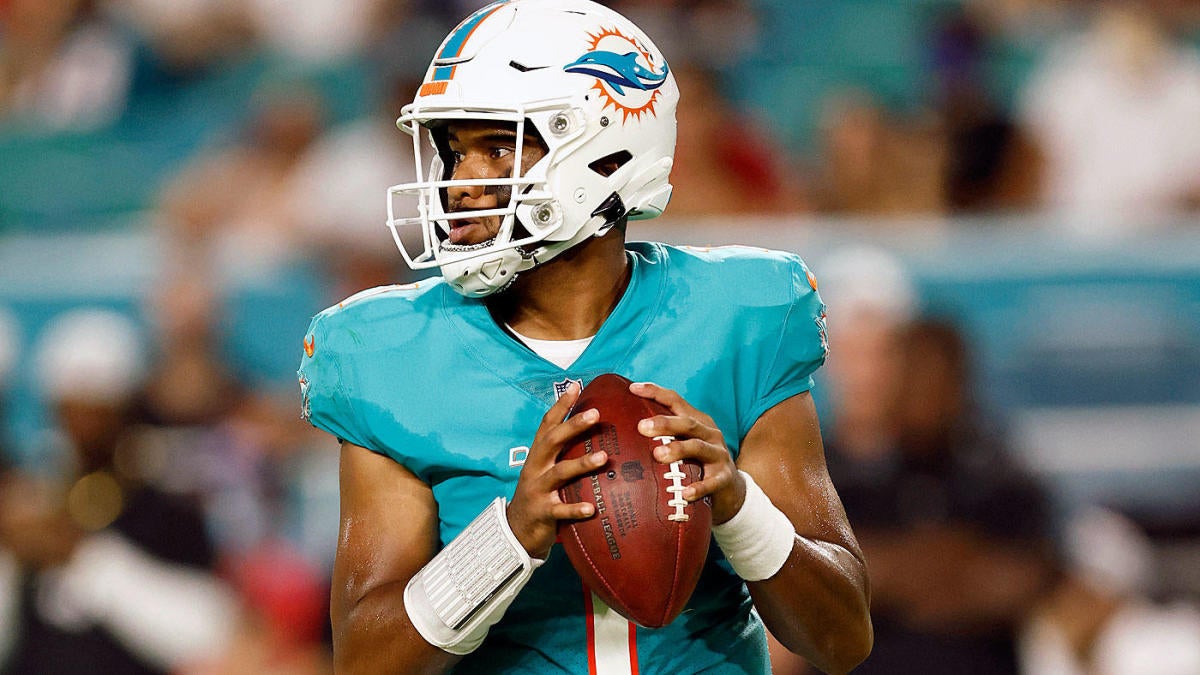 Dolphins coach Brian Flores has repeatedly called Tua Tagovailoa “our quarterback” this year, refusing to address rumors of Miami’s reported interest in Deshaun Watson. And yet, with the NFL’s Nov. 2 trade deadline fast approaching, the Dolphins continue to be one of the most rumored destinations for the Texans quarterback, who’s still facing 22 civil lawsuits for alleged sexual misconduct but apparently might get his wish of a relocation.

While they’re just a year removed from spending the No. 5 overall pick on Tagovailoa, the Dolphins have long been linked to Watson, and even more so in recent days since they fell to 1-6 on the year. But which teams could take Tua off their hands, in the event of a blockbuster Watson trade?

Here are five potential landing spots for the second-year signal-caller:

Jameis Winston is playing pretty good football in his first year as Drew Brees’ successor, and he’s quietly got the Saints at 4-2. It’d be a little awkward to deal for Tua right now. But let’s say they fall to the Buccaneers in Week 8. In fact, even if they don’t, there are still long-term QB questions: Winston is on a one-year deal, Taysom Hill is 31 and confined to a utility role, and they may not be well positioned to draft an upgrade in 2022. Besides that, at least theoretically, Tua is a fit for a Brees-style Sean Payton offense, tending to prioritize short-area efficiency. The Saints have surprised with bold moves before; why not under center, if the price is right?

They’re only seven months removed from acquiring Jared Goff from the Rams, but no one in and around Detroit has ever fully believed the former Pro Bowler is here to stay at QB. He’s been as expected in Motown: passable, but nothing more. And while the Lions almost certainly intend to explore future draft classes for their real answer, they’d be hard-pressed not to consider taking a flyer on Tua, who at least has untapped potential at 23. Offensive coordinator Anthony Lynn would’ve helped the Chargers draft Tagovailoa had Justin Herbert not been available in Los Angeles, and the Lions could still use one of their four first-rounders from 2022-2023 on competition under center.

Despite word of Tua’s availability, they’re reportedly not in on the Dolphins QB. They’d likely rather put more eggs in a more lucrative basket, like a potential Aaron Rodgers or Russell Wilson blockbuster in 2022. But if Tua comes cheaply via a three-way deal, how could they not consider it? Teddy Bridgewater was always a low-ceiling stopgap. Drew Lock had his shot. Tagovailoa doesn’t possess the big-play spunk John Elway prefers, but George Paton is the decision-maker now, and he invested in a “safer” QB (Bridgewater) this offseason. At the very least, Tagovailoa could offer a potential new staff a Jared Goff-esque trial-run placeholder.

They’d probably rather start from scratch at QB than spend a year or two trying to make Tua work as a replacement for Deshaun Watson. (Sports Illustrated‘s Albert Breer even suggested this week they prefer 2021 third-rounder Davis Mills over Tagovailoa.) But they are a logical destination by default; at this point, unloading Watson and his pending legal troubles is more important than immediately fixing their own QB spot, and Miami isn’t going to keep Tua onboard if it finally trades for his replacement.

Ron Rivera has been seeking a potential fixture at QB since he arrived in 2020. Dwayne Haskins, Alex Smith, Kyle Allen, Ryan Fitzpatrick and Taylor Heinicke have all been band-aids on an untreated wound. In Washington’s eyes, Tagovailoa could be the right mix of youth (long-term potential) and experience (for a roster seemingly ready to compete), hence recent — but conflicting — reports about the team inquiring about his availability. Fitzpatrick’s presence post-Miami is more ironic than anything, but Washington has always been one to work the veteran QB trade market, so with cap space to spare, the dots connect.