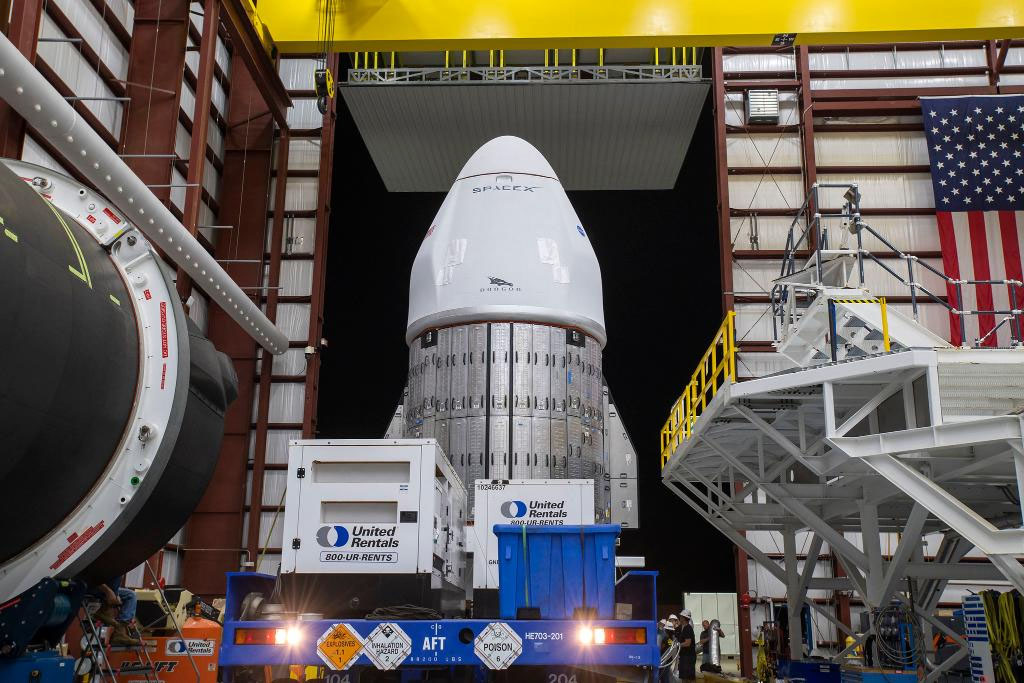 SpaceX is launching its 22nd Dragon cargo resupply mission to the International Space Station today and you can watch it live here.  Liftoff is at 1:29 p.m. EDT (1729 GMT).

The mission, called CRS-22, is scheduled to launch on a SpaceX Falcon 9 rocket, from Launch Complex 39A at NASA’s Kennedy Space Center in Florida. Currently, weather forecasts predict a 60% chance of good launch conditions. SpaceX does have a backup launch opportunity on Friday, if needed.

NASA commercial cargo provider SpaceX is targeting 1:29 p.m. EDT, Thursday, June 3, to launch its 22nd commercial resupply services mission to the International Space Station. Liftoff will be from Launch Complex 39A at the agency’s Kennedy Space Center in Florida. SpaceX’s Dragon spacecraft will deliver new solar arrays to power future work aboard the orbiting laboratory, along with new science investigations, supplies, and equipment for the international crew. Live coverage will air on NASA Television,  the NASA app and the agency’s website, with prelaunch events starting Wednesday, June 2.

Dragon’s pressurized capsule will carry a variety of research, including an experiment that could help develop better pharmaceuticals and therapies for treating kidney disease on Earth, a study of cotton root systems that could identify varieties of plants that require less water and pesticides. The research also will include two model organism investigations: One will study bobtail squid to examine the effects of spaceflight on interactions between beneficial microbes and their animal hosts. The other will examine tardigrades’ adaptation to conditions in low-Earth orbit, which could advance understanding of the stress factors affecting humans in space.

The mission will include technology demonstrations, including a portable ultrasound device. Additionally, astronauts will test the effectiveness of remotely operating robotic arms and space vehicles using virtual reality and haptics interfaces.

Dragon’s unpressurized trunk section will deliver the first two of six new roll-out solar arrays based on a design tested on the space station in 2017. A robotic arm will extract them and astronauts will install them during a series of spacewalks this summer.

About 12 minutes after launch, Dragon will separate from the Falcon 9 rocket’s second stage and begin a carefully choreographed series of thruster firings to reach the space station. Arrival to the space station is planned for Saturday, June 5. Dragon will autonomously dock to the space-facing port on the station’s Harmony module, with Expedition 65 Flight Engineers Shane Kimbrough and Megan McArthur of NASA monitoring operations.

The spacecraft is expected to spend more than a month attached to the space station before it splashes down in the Atlantic Ocean, returning with research and return cargo.

Full coverage of this mission is as follows (all times Eastern):

11 a.m. – Want an in-depth look at the science aboard Dragon? Watch on NASA TV or join us on Kennedy Space Center’s Facebook and YouTube pages as we chat with some of the principal investigators. If you have questions for them, use #AskNASA on Twitter. They may answer in real-time during the segment.

1:30 p.m. – NASA TV will broadcast a prelaunch news conference from Kennedy with representatives from NASA’s International Space Station Program, SpaceX, and the U.S. Space Force Space Launch Delta 45. For the dial-in number and passcode, please contact the Kennedy newsroom at ksc-newsroom@mail.nasa.gov no later than 1 p.m. Wednesday, June 2. The public can also ask questions by using #AskNASA on Twitter. They may be answered in real-time during the segment.

Live coverage of the launch on NASA TV will begin at 1 p.m. Thursday, June 3. For NASA TV downlink information, schedules, and links to streaming video, visit:

On launch day, a “clean feed” of the launch without NASA TV commentary will be carried on the NASA TV media channel.

Launch day coverage of the mission will be available on NASA’s website. Coverage will include live streaming and blog updates beginning no earlier than 1 p.m. Thursday, June 3, as the countdown milestones occur. On-demand streaming video and photos of the launch will be available shortly after liftoff. For questions about countdown coverage, contact the Kennedy newsroom at 321-867-2468. Follow countdown coverage on the agency’s launch blog at:

Members of the public can register to attend this launch virtually. Attendees will receive mission updates and activities via email. NASA’s virtual guest program for this mission also includes curated launch resources, notifications about related opportunities, as well as a stamp for their NASA virtual guest passport following a successful launch.

Watch and Engage on Social Media

Let people know you’re following the mission on Twitter, Facebook, and Instagram by using the hashtags #Dragon and #NASASocial. You can also stay connected by following and tagging these accounts:

Learn more about the SpaceX resupply mission at: