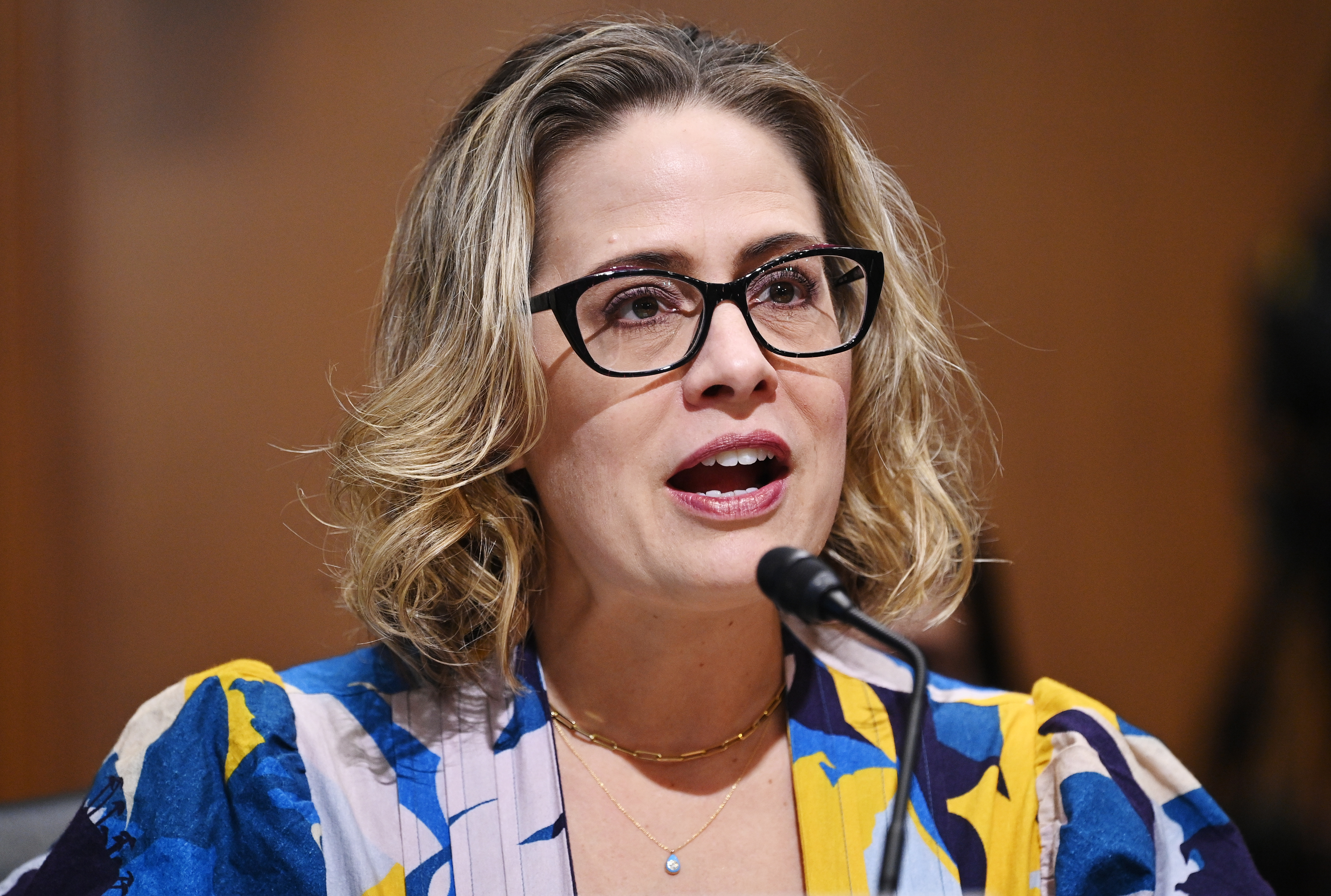 We always knew that taxes would be
the hard part. Well, with Democrats trying to get the Biden budget over the
goal line, everything has proven to be the hard part, but taxes
are the hardest of the hard parts. And what the Democrats have come up with is … good? It soaks the rich. It just doesn’t soak enough of them. And the reason why is all down to one person. I think you may know her.

Joe Biden started out wanting to set
the corporate tax rate back at the 28 percent level that was the law before
Donald Trump lowered it to 21 percent in 2017. Then the other Joe—Manchin, the one who isn’t the president but sometimes seems to think he is—said no; maybe 25, but that’s about as high as I can go.

Biden and Senate Finance Committee
Chairman Ron Wyden also supported raising the top marginal tax rate back to the
39.6 percent rate first imposed by Bill Clinton (in case you like to geek out on this
kind of thing, here’s a
chart of federal marginal tax rates all the way back to 1862, when
Abraham Lincoln first imposed an income tax to finance the Civil War). George
W. Bush lowered it to 35, Barack Obama brought it back up to 39.6. (Why is that
the magic number? To avoid something starting with a 4, I guess.) Trump
subsequently lowered it to 37.

But now, all that is off the table.
Kyrsten Sinema has declared, “No! Corporate taxes bad!” So what the Democrats
have turned to is a plan to hike the marginal rate on America’s roughly 700
billionaires. Forget the 1 percent. This is the 0.0002 percent.

I’ve seen this described as the
Democrats’ “new” proposal, but it actually dusts off a classic that first came
out of Wyden’s office, a Democratic Senate aide told me Sunday, originating from
a white paper his staff wrote in 2019. I haven’t seen this white paper, and the
aide wouldn’t share some of the key details with me—such as what the rate will
be and how much revenue it will raise. The brass tacks of this proposal are to
be unveiled Tuesday. But this idea has been on Wyden’s radar screen for a long
time, and his staff has been working in recent weeks with the Treasury Department
and the West Wing to finalize the particulars. It just wasn’t his, or the White
House’s first choice as a revenue-raiser in the budget.

The question of how much revenue it
will actually raise is obviously an important matter; Democrats say they want
to pay for most of the programs they finally decide to pass, and the budget
itself will need to be deficit-neutral in order to pass through the
reconciliation process. Experts quoted
in The Washington Post over the weekend could not immediately answer
how much revenue a billionaires’ tax can raise. And there’s always the thorny issue
of how billionaires will manage to dodge this obligation. Remember, Jeff
Bezos’s “salary” is around
$82,000.

But the key point about the
billionaires’ tax is this: Evidently, everyone on the Democratic side of the
aisle is in favor of this approach: even Sinema, and Manchin, too. His position
is perhaps partially explained by the fact that West Virginia isn’t home to a
single billionaire—or, rather,  there may
be one person who was once
a billionaire but (maybe!) no longer is. That person is Jim Justice, the
governor—in other words, the man who holds the office that Manchin really
craves.

More broadly, the way the tax issue
has played out tells us two things about today’s Democratic Party, one of which
is encouraging, the other not so much. The encouraging thing is that they don’t
seem to fear a little bit of the ol’ class warfare. Billionaires should
pay more in taxes. A lot more. I wouldn’t go quite so far as Bernie and
say we shouldn’t even have billionaires. But I would say that no society should
have multibillionaires. That is obscene.

I’m pretty old school. The top
marginal tax rate was north of 90 percent from World War II until 1964, when
LBJ lowered it to a still-high 77 percent. I’m for something like that, on very high
dollars. (A 90 percent rate, by the way, does
not mean the government takes 90 cents of every dollar a rich person makes;
the 90 percent figure applies only to dollars earned after a very high amount.) I don’t think it’s a coincidence that this was how our era of middle-class
prosperity (for white people, it’s important to note) was financed. Have a
gander at these top
marginal rates in Europe. Most countries range from the high 40s up into
the 70s.

High taxes and high rates of union
membership are what made this country great. And I don’t recall a lack of
innovation between 1942 and 1964 because high tax rates made budding
entrepreneurs not want to create. Quite the opposite: This was the era when
nearly every important invention and innovation was American-made.

So it’s a good thing that
Democrats want to tax billionaires. But there’s a lot more work to do here. For
one thing, the party has to elect more liberals. If there were 52 Democratic
senators, including, say, Sarah Gideon of Maine and Cal Cunningham of North
Carolina, Sinema wouldn’t matter. Not that Gideon and Cunningham were fire-breathing
liberals, but as freshman senators, they’d have been more loyal soldiers than
Sinema. The party could be passing something without worrying at all about
Manchin and Sinema, with Gideon and Cunningham as yeses and Vice President
Harris providing the fifty-first vote.

More importantly, there’s still a
lot of work to do in terms of reeducating the public about taxes. The actual
truth is that Americans—all Americans—are comparatively lightly taxed. The
Tax Foundation in 2019 ranked the United States 32nd out of 41 countries for overall taxation.
Democrats really need to underscore this reality. But if that’s politically impossible,
they should at least stand together in demanding that the top 2 percent (we’re
talking about people who earn around $400,000 a year or more) pull their weight.
That they currently aren’t isn’t the Democrats’ fault. Between the Senate and
House, there are maybe five or so Democrats impeding the effort. Electing more
Democrats will make the handful of obstructionists irrelevant.