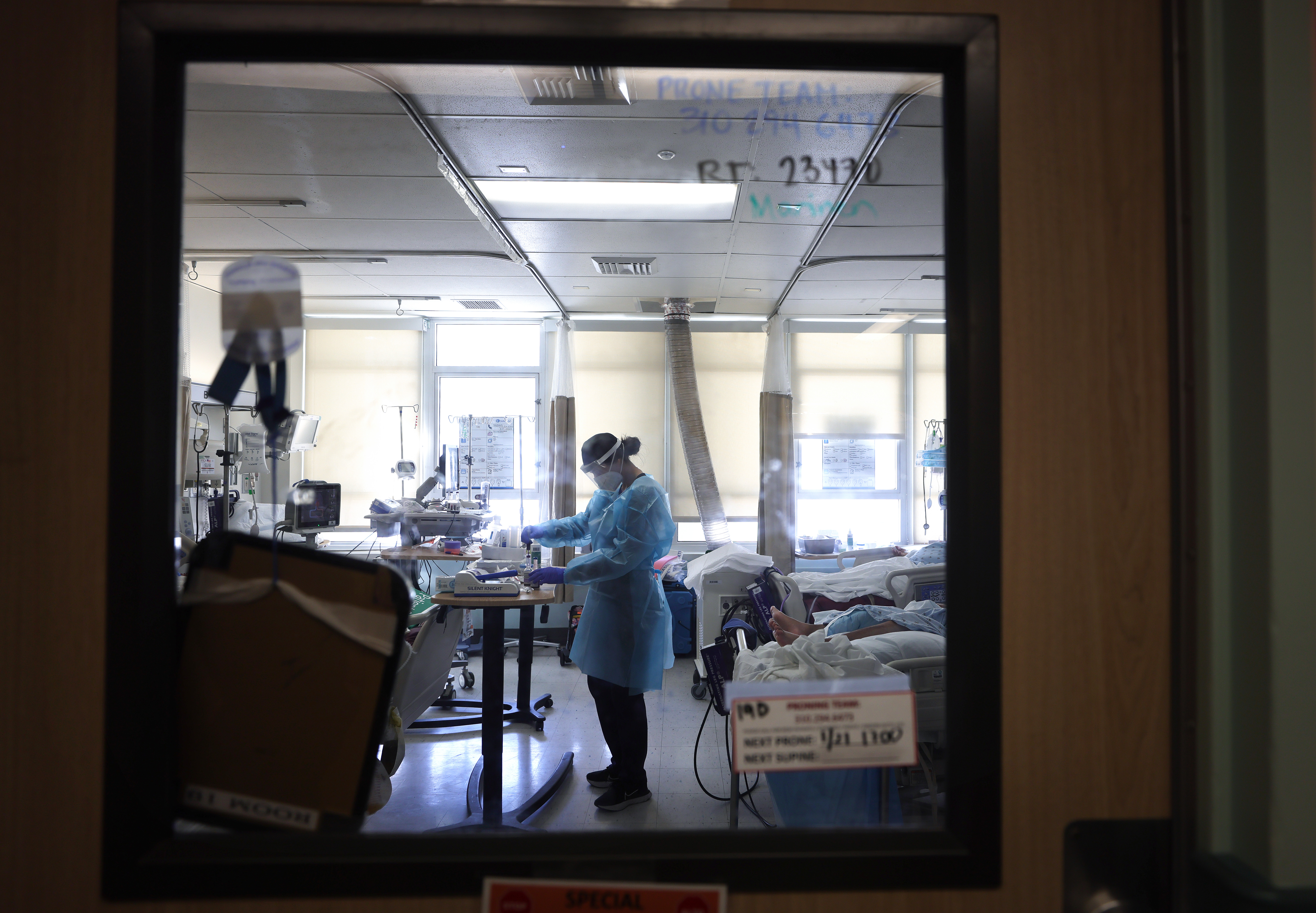 As many as two-thirds of nurses, by some estimates, have said
they’ve considered leaving their jobs over the past few months. Given the
various horrors of the last year and a half, it’s easy to understand why:
Stories of crowded city pandemic wards and medical staff sourcing their own personal protective equipment are impossible to shake. In The New Yorker, a nurse described ending most days
by walking into her apartment, sliding down onto the floor, and crying.
Hospital workers hosed themselves down at the ends of their shifts, terrified
of transmitting a deadly pathogen to the people they loved. They watched a
whole lot of people die. Now stories of nurse heroism have been eclipsed by
stories of nurse shortages, with seasoned professionals walking off the job, sometimes due to vaccine hesitancy or an existential unwillingness to go on. Often announcements of hospital closures
or cutbacks are made by CEOs, who are likely to say nurses are exhausted from working the
front lines or don’t want to get the jab. But nurses themselves tend to have
more varied reasons for leaving or changing their jobs.

As one nurse told NPR recently, her staff asked for better pay and
was thrown a pizza party instead. When hospitals around the country scaled back
their labor and delivery departments this year (for a time leaving a 12,000-square-mile
swath of Texas without a dedicated unit), few noted that labor and
delivery, some of the least profitable hospital services, are often the first to be cut when medical systems struggle. Midway
through March 2020, weeks before most of the country
shut down, a group of nurses from Wisconsin spoke to their local NPR affiliate
about the algorithm their hospital was using to determine staffing. Some said
that management wouldn’t give overextended departments more staff until they reached
105 percent productivity according to an obscure internal scale, leaving the
nurses who delivered babies unable to handle any unexpected admissions. And the
flexibility to handle unexpected admissions, as one nurse put it, is “exactly
what labor and delivery is about.”

The phrase “nursing shortage” suggests a simple problem of
supply and demand: too many patients and not enough people interested in caring
for them when they’re in need. And the pandemic has certainly exacerbated issues
that have been forecast for decades: a population of 73 million Baby Boomers
aging and requiring advanced care, underfunded nursing schools unable to take
new students, a geographic maldistribution of workers concentrated in more
affluent or more desirable places to live. But the cycle of gluts and shortages of nursing staff has been nearly
constant since the 1970s, with a particularly bad period in the 1990s, as
hospitals sought to slash costs by reducing staff, only to realize, once again,
that replacing skilled workers with lower-paid counterparts had a drastic
effect on whether a hospital saved lives. Which isn’t to mention that
the increase in the number of private equity–owned hospitals over the last decade has gutted many
facilities, leading to drastic staff cuts and squeezing pay.

Jean
Moore, the director of the Center for Health Workforce studies in Albany, New
York, said that her department is waiting for better data to determine whether
this particular crisis, exacerbated by the pandemic, portends a true shortage. “We suspect that some of what is happening in nursing reflects some
broader issue around labor force participation,” she said. “What kids of jobs
are doable, and which aren’t.” Anecdotally, she’s been hearing from colleagues
that the staffing shortages are uneven. Hospitals in New York are saying
they’re having trouble finding specialized nurses with
experience in the intensive care unit or emergency department. But recently, speaking with a
colleague in Virginia, she was told the biggest issue was the direct care
workers, the attendants and orderlies that make the hospital run. “Everyone is
after a candidate pool that is thinking very carefully about what they want to
do next,” she said, which essentially boils down to which jobs are worth doing
for $12.27 an hour.

Nurses represent a population that has been bludgeoned by
the broader forces in the American health care industry, an ineffective and
often bloated sector that spent
$3.8 trillion in 2019 and still struggled mightily to pay its workers
adequate wages. Staffing needs, determined mostly by hospitals and dependent on
the ever-shifting priorities of medical groups and new technologies, are
changing constantly: In the early 2000s, for example, the profitability of cardiac care centers inspired more hospitals to found them to compete with each other, which in
turn increased the need for cardiac nurses. It’s an “elastic” industry,
according to Patricia D’Antonio, a nursing historian at the University of
Pennsylvania. “Nurses are the backbone of the health system,” she said. “And
the health system continues to expand, no matter what we do.”

Nursing
is less a static position than a collection of skills—skills often molded by
the demands of the hospitals and health systems that determine what kind of
care to provide. In her book An American Sickness, Elisabeth Rosenthal
mentions the transformation of “head nurses” through the 1980s into “clinical
nurse managers,” adept at calculating payments and enforcing baseline
nurse-patient ratios. (She also writes at length on the emergence of luxurious
“hospital-hotels” developed to maximize what a medical group could charge—money
that could have been spent on raising nurse pay or bringing down costs but
that was spent on consolidating profit instead.) When hospitals attempted to rein in costs in the 1990s by increasing outpatient procedures and
transforming many large facilities into giant ICUs (a process the poet Anne
Boyer referred to as a “medical universe in which all bodies must orbit around
profit at all times” when she was discharged right after her double mastectomy), huge numbers of licensed nurses were laid off or saw their roles change. Many
were replaced with unlicensed staff. A decade later, when data showed burdening small numbers of nurses with large numbers of patients decreased
survival rates by almost a third, demand for professionals who had been ejected
from the workforce dramatically increased. But by that time, there weren’t enough
of those trained and specialized workers left to hire.

The
tension that follows from managers cutting costs and then struggling to find
qualified workers has been fairly consistent as long as hospitals have had
nurses. It’s an industry nearly always in crisis. As Jean Welan writes in her history
of the nursing workforce through the 1950s, the increase of possible treatments
and insurance plans to pay for them required a significant number of skilled
nurses, an expensive and crucial labor force employers found easier to replace
with lesser-paid assistants. As one hospital director in the late 1940s mused,
“Even if hospitals could find enough nurses to hire, their salaries would be
unaffordable.” More than 70 years later, when I called up Jean Ross, co-president of
National Nurses United, she told me she was frustrated with the way hospitals
“only want to do services that don’t cost them money and give them a big return.”
It’s a “downgrading of our work,” she said, “the reorganization of [our work]
into these simple little tasks, that can be done by someone less expensive.
They’re creating different categories of workers, it drives me nuts. They don’t
want to pay us.”

It
appears that seven decades of trying to keep nursing wages low has backfired
stupendously. Burnt out, underpaid, and unimpressed by the promise of pizza, they have gone on strike in at least 10 hospitals so far this year. A massive number have also quit their full-time jobs and taken lucrative travel gigs. To hire a nurse, a hospital could end up paying out $8,000 a week.