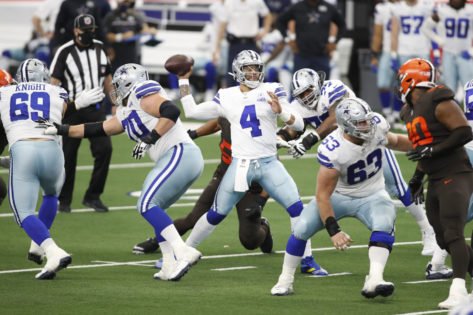 Dak Prescott suffered a season-ending double compound ankle fracture in Week 5 against the New York Giants last season. The former Mississippi State man was having a terrific individual season prior to that injury.

He had thrown for 1,856 passing yards with 9 passing touchdowns and was in line to break Peyton Manning’s single-season passing yards record.

Prescott was playing on a $31.4 million franchise tag in 2020. After a lot of speculation and negotiation talks, Dallas Cowboys and Dak agreed on a 4-year contract extension worth north of $160 million.

Of that amount, $126 million is guaranteed. For context, legendary Cowboys quarterback Tony Romo earned $125 million over the course of his 14-year stay in Texas.

So what does the future hold for Prescott as he gears up a comeback in 2021?

Can Dak Prescott be the man to lead the Cowboys back to the Super Bowl?

While talking to ESPN, Dallas Cowboys Executive Vice-President Stephen Jones was all praise for Dak Prescott after his latest extension deal.

Despite all the doubts surrounding his injury, Jones insists that the Cowboys had no qualms tying the 27-year-old down to a long-term contract.

He said, “At the end of the day, he is our partner in this, and certainly Jerry and I have to make tough decisions on how we divide up, if you will, the pie. And the right guy has the biggest piece.

“That’s how I know we got it right. You look at his teammates. You look at the people, like a Michael Irvin, who spent time with him, past great players who had that ‘it’ factor. They all love and respect Dak.

“He’s just got an insatiable appetite to be great, to compete, to lead. Whatever, however, you want to put all of that in a box, he has that.

“That’s why Jerry and I are so convinced that we did get this right. He’s only going to get better from here,” Jones said earlier this week.

Barely 27, Prescott has a lengthy career in the NFL ahead of him, providing he stays fit. It’s been almost 25 years since the Cowboys last played in the Super Bowl. Is 2021 the year they finally break the jinx?