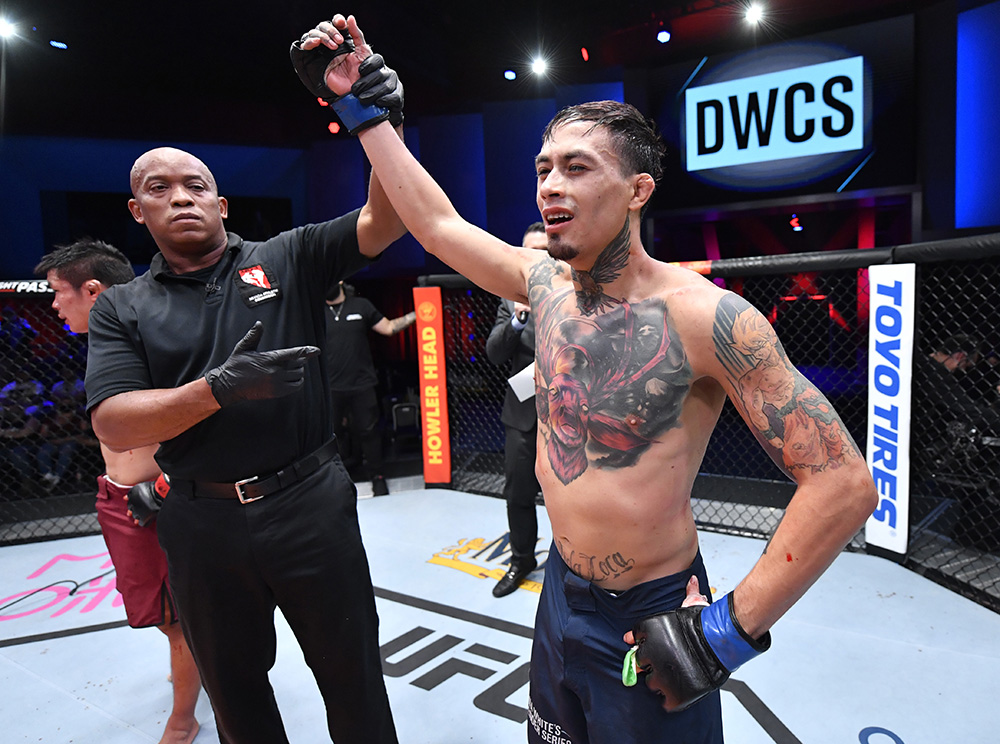 The UFC Apex hosts Tuesday’s card, which streams on ESPN+.

Murad was aggressive from the start, rushing forward to fire punches and refusing his taller opponent space to work. Bin eventually changed levels, creating a scramble that saw him claim top position by settling into his opponent’s guard. It took Murad a few minutes, but he was eventually able to crawl back to his feet, where he was again aggressive with strikes, driving in big left hands and firing off a few wild knees.

With one minute remaining, Bin was able to take the fight to the floor once more, and he finished the round working from side control.

Murad again landed a heavy left hand early in the second, buckling his opponent’s knees, but Bin refused to go away. After being tagged a second time, Bin shot forward and was again able to drive Murad to the canvas. Bin enjoyed a couple minutes of top time but didn’t do much with the position before Murad was able to sweep and move back to the feet.

After some back-and-forth action in the striking department, Bin again moved inside and took the fight down in the final minute, moving immediately to side control and finishing with a few big elbows at the end of the frame.

Eventually, with 90 seconds left, Murad was able to scramble up, but the final exchanges weren’t overwhelmingly in his favor. In the end, Murad was awarded a split-decision win, 28-29, 29-28 and 29-28.

Unfortunately for Murad, the result was not enough to earn him a UFC deal.

In a lightweight matchup, Manuel Torres (12-2) made quick work of Kolton Englund (9-4) in a fight that ended in rather odd fashion.

The taller Torres was quick to use his long jab to start, as well as a few kicks from range. Torres had no issue sitting firm in the pocket and returning fire, and the two exchanged shots from close range. Torres eventually picked up his lateral movement, shifting and finding angles to strike.

Taking damage, Englund elected to shoot forward, but he didn’t secure the takedown. As they broke apart from the clinch, Englund complained of an eye poke, but referee Herb Dean instructed the two to carry on. Torres missed on a high kick, but a punch landed clean and sent Englund to the floor, where a series of elbows sealed the result. Officials looked at the replay but ultimately let the result stand, and Torres took home a UFC deal.

[ #DWCS is LIVE on @ESPNPlus ] pic.twitter.com/puFCqLwAEb

In a women’s flyweight matchup Karine Silva (14-4) showed an impressive range of skills before ultimately securing a submission win over a powerful Yan Qihui (20-4).

The taller Silva started quickly, working forward and looking to utilize her reach. Meanwhile, the shorter Qihui showed her power early, loading up on heavy punches before driving forward and scoring a takedown. Silva was immediately active from her back, bringing her guard high and seeking options as Qihui looked to stay compact and drive in short punches when possible.

Qihui eventually pulled back to her feet and kicked the legs a bit but then settled back into her opponent’s guard and looked to deliver powerful ground-and-pound shots. Silva countered by pulling her right leg up under the chin and pressuring with the gogoplata, but Qihui was able to pull free and last until the bell.

Silva was again aggressive with her strikes in the second, but Qihui was content to return fire in the pocket. Silva tried to counter with a takedown, but Qihui defended well and was able to stay on her feet – though it didn’t ultimately help.

As Qihui moved forward, Silva reached up and locked in a standing guillotine. Qihui lifted her in the air and slammed her to the canvas, but Silva fell straight to guard and kept the choke in place, squeezing until she got the tap at the 1:44 mark of the round.

One day after an ugly incident at their staredown, Javid Basharat (11-0) dominated opponent Oron Kahlon (16-1) before scoring a third-round submission.

While Kahlon rushed quickly forward at the start of the contest, it was Basharat who was effective early, landing slashing kicks at the leg. Kahlon began to answer back with a few big shots of his own before Basharat was able to drive him to the canvas. Once on top, Basharat was able to bring in punches and elbows and taking the time to ask, “Why isn’t he talking?”

Kahlon tried to tie things up underneath, holding the wrists and grabbing the head, but Basharat continued to work free and deliver damaging shots from the dominant position. With time winding down, Kahlon tried to turn for a leg, but Basharat patiently spun through the hold and returned to the top. Basharat survived until the bell, but blood covered his face as he returned to the corner.

Kahlon pressed forward to start the second, and Basharat seemed content to trade with him look to damage on the feet. After slipping on a flying knee attempt, Basharat was able to scramble to the back. Kahlon was able to turn inside and wrap the neck, which forced Basharat to slow down and address the pressure there, eventually dragging the action to the canvas and setting up on top once again.

As time wound down, Kahlon did his best to keep things tight underneath. Basharat was able to drive in a few short elbows and forearms, though he wasn’t able to inflict nearly as much damage as he did in the opening frame.

Basharat was the aggressor in the third, walking forward and ripping at the leg before throwing a side kick to the body. Basharat showed little concern for his opponent’s striking, setting up in front and picking his shots. A steady diet of low kicks saw Kahlon hit the floor, and Basharat settled on top and looked to strike.

Kahlon again did his best to hold wrist control and pull down the head to slow things down, but Basharat still found spots to land occasional punches and elbows from the top. Eventually, Kahlon rolled, and Basharat wrapped his neck and squeezed from the top side, eventually earning the tap from the guillotine at the 4:12 mark of the final round and scoring hm a UFC deal.

Closing out the dominate performance with a 3️⃣rd round submission 💪

Bantamweights up next in the penultimate bout at #DWCS 45 with China’s Xiao Long (16-6) vs. Mexico’s Christian Quinonez (15-3).

Both men moved well to start, with Quinonez the aggressor but Long swinging back in the pocket. Quinonez kept his lateral movement high as he laced in slashing leg kicks and straight punches down the middle. Eventually, Quinonez caught a kick from Quinonez and tripped him to the canvas, threatening the neck briefly, but he couldn’t keep the fight on the floor.

Both men kept the pace high as the round unfolded, though Quinonez seemed to be getting the best of the exchanges. Still, Long wasn’t intimidated and actually taunted a bit as he mixed it up from close range. Both men landed big shots in a spirited final salvo before the bell.

In the second, the pace again remained high. Long was busy with his hands, working in tight and landing big shots, but Quinonez was constantly on the move, and he landed straight punches from range, as well. Halfway through the frame, Long landed a perfectly timed right hand that scored flush as his opponent was pushing forward, and Quinonez was briefly wobbled from the attack. Still, Quinonez recovered quickly and was back delivering his own strikes shortly after.

The two continued trading until the end, with Long’s face showing the wear as blood streamed from his mouth, but both men had their moments.

Long continued pressing in the third, and Quinonez remained mobile despite the torrid pace. Punches and kicks were exchanged, with Quinonez finding a home for a brutal uppercut that Long somehow survived. Long continued throwing heavy punches and powerful kicks, but it was Quinonez’s pinpoint shots that were adding up as the round unfolded.

Long refused to take a backwards step, and though his face was damaged and appeared to be limping a bit, he attacked until the end with spirited aggression. In the end, Quinonez took home a decision win 30-27 on all three cards.

The solid effort was enough to score Quinonez a UFC deal.

Straight POWER from the hands of Quinonez 😤

It’s time for the featured clash of #DWCS, and it’s a middleweight matchup with Russia’s Gadzhi Omargadzhiev (12-0) vs. Brazil’s Jansey Silva (7-1).

In the night’s featured contest, Gadzhi Omargadzhiev (13-0) kept his career record perfect with a destructive submission win over Jansey Silva (7-2).

The two men felt each other out on the feet a bit early, with Silva missing on a few powerful kicks to the leg before Omargadzhiev was able to drive forward and shift the action to the canvas. Once on the floor, Silva worked a closed guard and did his best to hold tight for a restart. Omargadzhiev stayed busy, landing a few punches and briefly leaving his right arm in a precarious position, but Silva couldn’t capitalize.

With time winding down, Omargadzhiev dropped back to attack the right leg. Silva spun through the initial attempt and looked to strike, but Omargadzhiev turned again and adjust the angle and driving his hips through and earning a submission win at the 4:19 mark of the first round, as well as a UFC contract.