Greg Hardy out of UFC 270 fight against Serghei Spivac 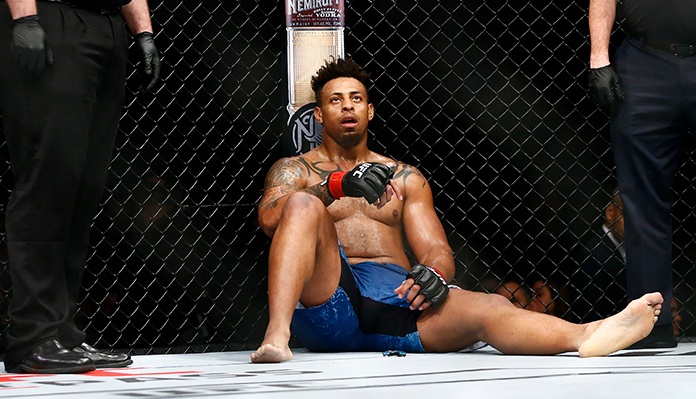 Greg Hardy will not be competing at UFC 270.

Hardy was scheduled to face Aleksei Oleinik next weekend, but on Thursday it was revealed the Russian was out of the fight and was replaced by Serghei Spivac. Now, Hardy posted on Instagram a photo of his finger that is cut and appears to be broken.

“New date who dis. Lol gotta keep it light even though I’m kinda sick about it. Putting on a show on the biggest card of the year was my 2022 dream and now i gotta wait. Sorry to all my fans and haters and to my opponent. I wanted this one bad I even took a short notice change with no ?. But. Gotta be pro about it right so back to the gym and back to the grind. KOs coming soon. Sorry but I shall return soon hopefully in a couple weeks ps this after I snapped it back in place from when I was pouting at myself lol,” Hardy wrote on Instagram.

Greg Hardy was entering the fight on a two-fight losing streak after being knocked out by Tai Tuivasa in July. Before that, he was TKO’d by Marcin Tybura which snapped his two-fight winning streak. The pressure was also on the former NFL star entering this fight as he revealed to BJPENN.com that this was the last fight on his contract.

“This is my last contract fight and they are putting me in there with Aleksei. We aren’t picking and choosing, we are fighting fighters and are making our way up… It’s a business. The cool thing about me is I’ve been on the business side for so long. A lot of these guys have been fighting their whole life and haven’t done any business,” Hardy said. “They struggle with the thought of it, the mental of the business side. For me, if I win and he doesn’t sign me again, it’s a thank you because this has been a hell of a show. My fans have loved it, you have loved it, I have had a great time and we are moving on.

“I don’t think I’ll lose. But, if I do and he doesn’t decide to bring me back, it’s the same thing, it’s a pleasure,” Hardy concluded. “He didn’t have to let me in, he didn’t have to let me shine and he did and we had a hell of a time. I think I’ve been on every Conor card, every big card. It’s been a hell of a ride. Just like when I left the (Dallas) Cowboys, I hope I did more than you guys gave me. I think I did and I think I’m going to keep doing it.”

When and who Greg Hardy will fight in his return is uncertain, but he is out of his fight at UFC 270.

What do you make of Greg Hardy having to pull out of UFC 270?