Deft navigation of a busy fall release slate, plus help on the COVID front, helped Bond reach the milestone

While MGM’s “No Time to Die” has faced an extremely rocky road to release even by the standards of the pandemic era, Daniel Craig’s final James Bond film has passed the $500 million global box office milestone at a time when such a benchmark has proven difficult to reach.

Prior to “No Time to Die,” only four films this year had passed the $500 million mark, and three of them are Chinese films: “Hi, Mom,” “Detective Chinatown 3,” and “The Battle at Lake Changjin,” which this weekend became the year’s top grosser with $828 million almost entirely from China. The sole Hollywood film in the group is Universal’s “F9,” which hit $716.5 million after its summer release.

With a running total of $525 million, “No Time to Die” has passed the global grosses for two Marvel Studios titles: “Black Widow” ($379.5 million) and “Shang-Chi and the Legend of the Ten Rings” ($417.6 million). A major reason for this is the waning effects of the Delta variant surge that crippled moviegoing turnout in many major box office markets around the world in late summer, providing “No Time to Die” with one less major hurdle to getting Bond fans out to theaters. 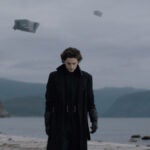 But another key factor for the film was how distributors MGM and Universal (in most overseas markets) handled a tricky fall release slate where studios are vying to get plum spots for their top films amid stiffer competition. After multiple delays forced by the pandemic, the two studios locked in early October — Britain and most of Europe avoided the first two weekends of “Dune,” which Warner Bros. released a month ahead of the U.S. to capitalize on its Venice premiere, and a full month after the global release of Disney/Marvel’s “Shang-Chi and the Legend of the Ten Rings.”

This allowed Bond to stand as the undisputed top new blockbuster on opening weekend, and the numbers show it. Aside from “F9,” “No Time to Die” is the only Hollywood release that has grossed over $400 million overseas this year, accounting for 77% of the film’s overall gross so far.

Become a member to read more.

But MGM faced a different issue in the U.S., especially after Sony moved up the release of “Venom: Let There Be Carnage” from October 15 to October 1, a week ahead of “No Time to Die.” The move, which followed the record-breaking opening of “Shang-Chi in early September,” has paid off. The “Venom” sequel opened to $90 million domestically — the biggest opening of 2021 — and has sold $181 million in tickets so far. By distancing itself from “No Time to Die” internationally, Sony also gave “Venom 2” plenty of runway in foreign territories — where it has racked up $170 million, with half of its global rollout still to come.

As a result, “No Time to Die” found itself between “Venom 2” and “Halloween Kills” on the U.S. release schedule — more competition than it faced overseas. So while “Venom 2” beat pre-release projections on its opening weekend, the Bond film had to settle for a less robust $55 million launch. Since then, the film has leaned on the subset of older audiences who feel comfortable returning to theaters and who have historically turned out for Bond films to bring it to a three-weekend domestic total of $120 million.

As we noted when the film arrived, pandemic delays have inflated the cost of “No Time to Die” and raised the break-even point to around $750 million — which means the film will need post-theatrical revenue to turn any sort of profit. But 007 has helped usher in a new stage of the box office rebuilding process by drawing in a larger swath of moviegoers than those that were showing up for films like “F9” and “Black Widow” during the summer.

There’s also the chance that Bond will soon be joined in the $500 million club by several other blockbusters. Though COVID-19 will remain a problem — new outbreaks in several Chinese provinces have been reported — Marvel’s “Eternals” will be entering theaters in two weeks in a much better environment than “Shang-Chi” did. And depending on whether the world can avoid another winter infection surge, holiday titles like Disney’s “Encanto,” Sony’s “Spider-Man: No Way Home” and Warner Bros.’ “The Matrix Resurrections” could also outperform many of the titles that were released during the early stages of reopening this past summer.