Meet the MAGA Extremist Who Might Be Arizona’s Next Governor 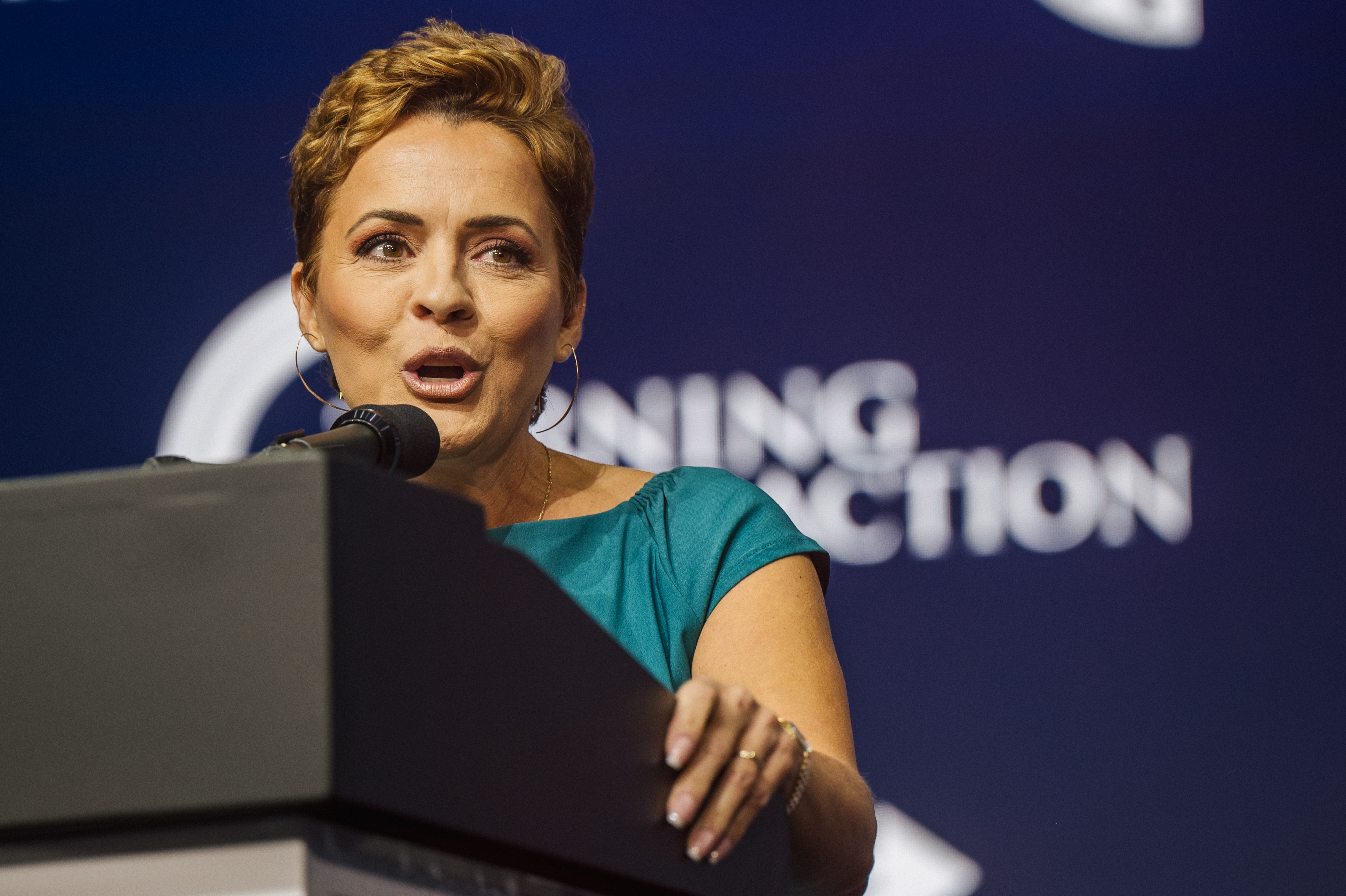 When Donald Trump visits Arizona on Saturday he’ll be joined by some of the usual MAGA suspects—U.S. Representatives Andy Biggs, Paul Gosar, and Debbie Lesko. They’re an Arizona triumvirate known for their hard-right conservatism and eagerness to indulge in Trump’s most outlandish claims of voter fraud. Alongside them will be another Republican with the same tribal alignment within the GOP. She is far less known nationally—but ought to be.

Meet Kari Lake, a former TV journalist turned aspiring gubernatorial candidate who was once a Republican turned independent, then Democrat, and is now the specific flavor of fringy-Republican that MyPillow CEO Mike Lindell, former Trump national security adviser Mike Flynn, and Gosar find appealing enough to endorse in a multicandidate primary for governor—along with Trump himself.

Lake has never held elected office before, but she’s quickly risen in notoriety during this race. She’s appeared with QAnon activists and Nazi sympathizers. She has supported a secretary of state candidate with ties to the QAnon conspiracy theory movement. Her rivals see her not just as a problem for other candidates running for the nomination but also for the party’s chance to keep the governor’s mansion in general.

“There’s no doubt that if Kari Lake is the nominee, then this state is in play” for Democrats, said Republican strategist Barrett Marson, who is involved with Arizona’s Best, an independent expenditure group supporting Arizona Republican gubernatorial candidate former Arizona Congressman Matt Salmon. “She’s a danger to Republicans losing the gubernatorial race for the first time in 16 years.”

Lake has said that if she were elected governor she would direct Arizona Attorney General Mark Brnovich to open a wide-ranging criminal investigation into the 2020 election where he would “seize all election material, all election equipment, and he should start questioning people immediately.” She’s described Trump as “pretty close to perfect” (at least in her latest iteration; years ago, she was an outspoken Trump critic). Trump’s decision to overlook Lake’s anti-Trump past and endorse her seems to be based on a mixture of her focus on investigating the 2020 elections, her skepticism about any measures to curb Covid-19—and her television skills.

Within her current political party, she’s gone further than anti-establishment Republicans usually go. She’s vowed to rid the party of John McCain and Jeff Flake types. She’s also suggested that the Republican Governors Association is somehow against Trump and candidates aligned with him, a bizarre claim as umbrella campaign committees like the RGA or its Democratic counterpart are really only interested in electing as many candidates from their respective party as possible.

Lake is more a new breed of Republican candidate. She doesn’t describe herself as just a Republican, or even the previously popular “constitutional conservative.” She says she’s a “MAGA conservative.” Lake checks all the boxes of an anti-vaccination alarmist. She’s bragged about how she sought ways around vaccination requirements when looking for a restaurant to dine at in New York. She’s bragged that she has not gotten a Covid vaccine, “and I don’t plan on getting it.” She’s also propagated the same arguments casting doubt on the safety and efficacy of vaccines—a position that actually puts her to Trump’s right. “I’m not believing a lot of the science, so-called science coming out of some of our so-called experts,” Lake said in mid-January.

In past election cycles, a candidate like Lake would, at best, be a one-news-cycle sideshow. Her unfounded and conspiratorial claims on election integrity and the ongoing global pandemic would at least make Republican primary voters in Arizona question her general election viability. Her criticism of McCain would be sacrilegious in Arizona political circles. Even in the last two election cycles, as Trump reigned over Republican primaries, some of Lake’s past criticisms of the former president would make her untenable to pro-Trump voters.

Yet in this 2022 Arizona governor’s race, what little polling there has been of the primary has shown Lake leading the field of about half a dozen Republican candidates. Likewise, despite past denunciations and criticisms of Trump, she proudly touts his endorsement on every image her campaign posts online. She isn’t exactly shying away from the one-term former president when he visits for a rally on Saturday.

Lake may be polling ahead of her six other rivals, but she hasn’t led the pack in fundraising. She’s been outraised—basically by twice as much—by rival Karrin Taylor Robson, a developer and former member of the Arizona board of regents. That’s something Arizona Republicans are taking as a sign that this will be a long, drawn-out primary all the way to August. “It’s going to be a marathon,” said Republican strategist Matthew Benson, who’s working for Robson.

On the Democratic side, Arizona Secretary of State Katie Hobbs has led in most polls in the multicandidate primary. She is one of three candidates, alongside former state Representative Aaron Lieberman and former U.S. Customs and Border Protection chief of staff Marco López Jr. Hobbs has staked out a reputation as a defender of ballot integrity and democracy during the state’s recent Cyber Ninja chaos. But as she’s run for governor, Hobbs has also had to field questions about a racial discrimination controversy under her watch.

There’s still plenty of time before both parties select their nominees, but it’s entirely possible that the general election could be between Hobbs, after an extended primary, and Lake, having won despite failing to unite the Republican primary behind her candidacy. Whoever would win that contest would become the fifth woman elected governor of Arizona.

A Hobbs versus Lake matchup would almost certainly be one of the more bruising and negative statewide contests in the 2022 cycle. That’s because the larger importance of this race and its outcome relates to the 2024 presidential race. Biden won the state by 10,457 votes, and the GOP state legislature has spent a year trying to prove, with massive unsuccess, that the outcome was a fraud. Lake, or a candidate like her, would proudly move to try to boost even the most unsubstantiated claims of voter fraud and provide executive overwatch to the state’s legislature as it looks to further overhaul the state’s election laws and toe the line of whatever conspiratorial claim Trump or a similarly minded nominee decides to peddle. The outcome of a presidential race—or control of the Senate—could depend on whoever is sitting in the Arizona governor’s mansion.

Nobody can see into the future, but it’s a fair bet that when Trump takes the stage Saturday night and starts making his false claims of election fraud and some kind of secret alliance among some Republicans, Democrats, and the media to oust him, Lake will be beaming by his side.