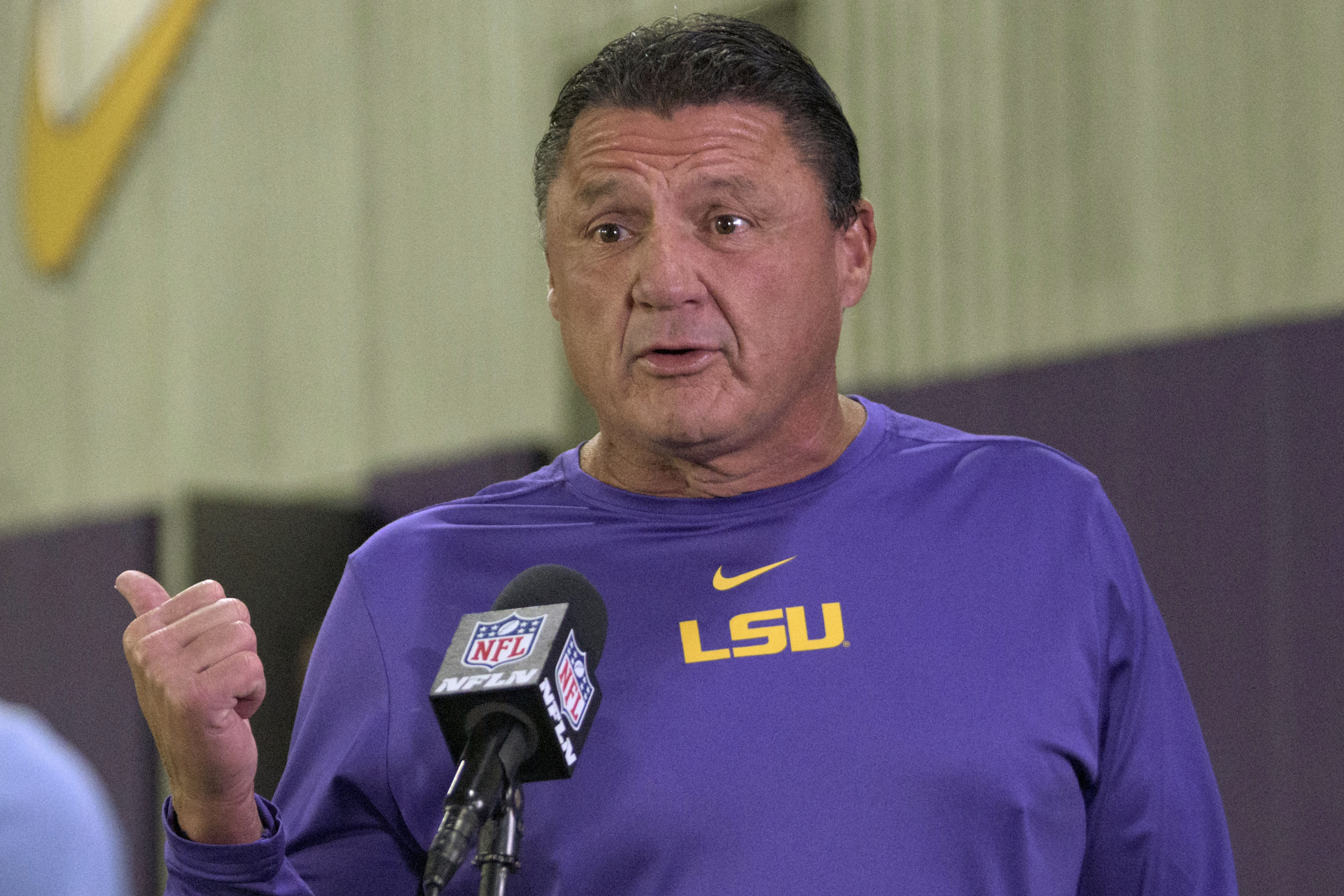 Monday marked the start of the 2021 SEC media days from the Wynfrey Hotel in Hoover, Alabama.

After last year’s event was conducted virtually due because of the COVID-19 pandemic, this year will mark the first in-person media days for coaches and players from every program in the SEC to discuss their expectations for the upcoming season since 2019.

LSU head coach Ed Orgeron was the main attraction on Day 1, but SEC commissioner Greg Sankey kicked things off with some notable information about how the schedule will be handled in the event of potential coronavirus issues for teams.

Addressing reporters, Sankey said the schedule this season will not allow for games to be rescheduled, so teams with COVID-19 outbreaks that prevent them from playing will have to forfeit/

“We have not built in the kind of time we did last year, particularly at the end of the season, to accommodate [postponements],” he said. “And unless we’re going to do that, our teams are going to have to be fully prepared to play their games as scheduled.”

Sankey also made it known he would like to see more teams in the conference get more players vaccinated, as only six of the 14 members are currently at the 80 percent threshold.

SEC Commissioner Greg Sankey is making it clear. The year of rescheduling games is over. If one team can’t play due to COVID then it’s going to be a forfeit. He is imploring his member schools to get up to the 80 percent vaccination level. So far only 6 of 14 have done so.

There were a total of 139 games across college football that were canceled or postponed last season because of COVID-19 issues, including 15 involving SEC teams.

Another topic that Sankey touched on was the adoption of a name, image and likeness policy that allows players to earn money while still maintaining their college eligibility.

Sankey did agree with the temporary rule adopted by the NCAA for the time being, but added he would like to see a national standard adopted.

Greg Sankey on NIL: “The NCAA rules can no longer resolve key issues. We need a federal solution. … Congressional action is necessary if we’re gonna provide every student a clear, consistent and fair opportunity to benefit from their name, image and likeness.”

One area that the SEC—and FBS football, in general—has received scrutiny for is the lack of diversity among head coaches.

ESPN’s Ivan Maisel noted in December that 13 of 130 FBS programs had a Black head coach. There are currently zero in the SEC after Derek Mason was fired by Vanderbilt in November.

Sankey announced Monday that the conference is working to build diversity among its coaches to give “historically underrepresented groups” more opportunities going forward.

The SEC is kicking off an effort to build diversity among football coaches. The league will now be involved to make sure “historically underrepresented groups” are considered in the hiring process, commish Greg Sankey said. There are zero HCs from those groups now.

Mullen had a matter-of-fact response when asked about Georgia as the preseason favorite to win the SEC East.

Dan Mullen at SEC Media Days on Georgia being the team to beat in the SEC East: ‘Didn’t they say that last year?’

Florida stunned the Bulldogs 44-28 in November en route to winning the division and earning a spot in the SEC title game for the first time since 2016.

Gators defensive lineman Zach Carter echoed his head coach about the team being underestimated heading into the season.

Florida DL Zach Carter says the team sees what people have been saying about the Gators this offseason.

“I think it’s a good thing that we have that chip on our shoulder this year, and we want people to be surprised this year.” pic.twitter.com/MoQXjZx6ug

One of the marquee matchups for the Gators this season will be a home game against Alabama on Sept. 18. This will be the first regular-season meeting between the two teams since 2014.

UF’s Dan Mullen on hosting Alabama for 1st time in 10 years: “I’d like to do away with permanent cross over games (between East & West division teams), so you get these type of games more often”

The Crimson Tide have dominated the rivalry with seven consecutive wins since 2009. Florida’s last win was on Dec. 6, 2008, in the SEC Championship Game when Tim Tebow was still with the program.

Another team on Florida’s schedule this season will be LSU at Tiger Stadium on Oct. 16. The Tigers are looking to rebound in 2021 after a disappointing 5-5 record last year.

The biggest issue for LSU in 2020 was the defense that allowed 34.9 points per game. Bo Pelini was fired as defensive coordinator and replaced by Daronte Jones, who spent the past five seasons working as an assistant in the NFL.

Orgeron explained what he wants to see improve on his defense this season with Jones coaching the group:

The always-colorful LSU head coach had a unique response when asked what he was interviewing assistant coaches during the offseason.

Ed Orgeron said he imagined he was an LSU Football player while interviewing assistant coaches this offseason.

“I wanted to see how well they could communicate to our players.”

One of the key players for the Tigers who will be instrumental in their success is cornerback Derek Stingley Jr. The junior star is widely regarded as one of the top prospects in the 2022 NFL draft, but he’s got a huge role to play on the outside for LSU’s defense.

Even though cornerback is his primary position, Stingley didn’t close the door on possibly getting involved in the offense if the coaches want to take advantage of his skill set.

“That depends on whether Coach O thinks I should be or not.”

Do you think you should be?

“Whatever I need to do to help the team win.”

Stingley has been LSU’s primary punt returner over the past two seasons. He averaged 16.2 yards per return on six attempts in 2020.

Orgeron told SportsTalk with Bobby Hebert and Kristian Garic (h/t Crissy Ford of LSU Tigers Wire) in June that “we’d like to use” Stingley for a few snaps on offense, but left the final decision up to his star defender if he’s comfortable with it.

As for what he expects from LSU in 2021, Stingley wants to see the team develop its chemistry as the season goes along.

“I’m looking forward to the team as a group as a whole and seeing what real chemistry looks like.”

Chemistry been a theme with Stingley today.

One reason LSU struggled last season could have been an inability to develop chemistry with so many new players in prominent roles.

After winning the College Football Playoff Championship in 2019, the Tigers tied an NCAA record with 14 players selected in the NFL draft. Joe Burrow, K’Lavon Chaisson, Justin Jefferson, Patrick Queen and Clyde Edwards-Helaire were all first-round picks in 2020.

Among the new head coaches in the SEC this year is Shane Beamer at South Carolina. The son of former Virginia Tech head coach Frank Beamer is getting his first opportunity to lead a program after spending the past 17 seasons as an assistant coach.

Based on his opening statement Monday, Beamer is very excited to get things started this season.

Shane Beamer over 12 minutes in his opening statement, topics ranging from position-by-position previews to an overall endorsement for the future of South Carolina.

“The best days of South Carolina football are right in front of us.”

Y’all think this guy is excited to be here?

Beamer knows South Carolina very well from his time as an assistant under Steve Spurrier from 2007-10. He seemed to be utilizing his time at the microphone to recruit at least one player in particular.

Shane Beamer: “We are going to pass to the tight end. We WANT the premier tight ends in America.”

The Gamecocks are in the running for Oscar Delp, a 4-star recruit and No. 3 tight end in the 2022 class by 247Sports composite rankings. There is heavy competition for the Georgia native, including from the Bulldogs, Crimson Tide, Gators and Michigan.

Beamer’s exuberant personality hasn’t won South Carolina any games yet, but he appears ready to handle the difficult task of coaching in the SEC.

South Carolina has finished under .500 in each of the past two seasons. Its .200 winning percentage in 2020 (2-8) was the seventh-worst single-season mark in program history.