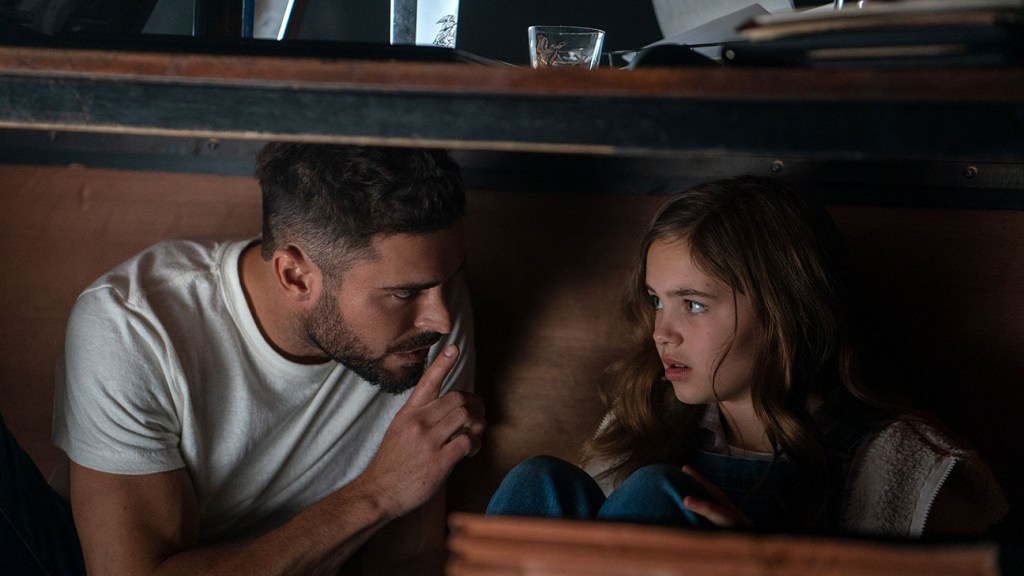 There have been so many mediocre films based on Stephen King novels that a new rule of thumb needs to be established: If you’re going to do a remake of one, it should be mandatory that it be better than the original.

The new version of Firestarter qualifies, but just barely. We’re spared the inherent campiness of Drew Barrymore, then not that far removed from E.T., as Charlie, the little girl with pyrokinetic powers. There’s no shot of the central character with her hair lifted alarmingly above her head, as if she were appearing in the worst-ever shampoo commercial. And the deadly assassin Rainbird is actually played by a Native American actor, Michael Greyeyes (Wild Indian, Rutherford Falls), rather than George C. Scott, whose presence didn’t exactly scream Indigenous.

Otherwise, this remake, simultaneously appearing in theaters and streaming on Peacock, mainly feels like a decent cable television movie, albeit one with enough violence and profanity to earn an R rating. Or rather, it feels like the pilot of a streaming series, which seems inevitable in the never-ending thirst for IP content.

Talented child actor Ryan Kiera Armstrong is no stranger to Stephen King, having appeared in It: Chapter Two, or to horror in general, thanks to her recurring role in a season of American Horror Story. She’s convincingly both vulnerable and scary as the 11-year-old with incendiary abilities, the result of being born to parents with psychic powers of their own due to being the subjects of drug experiments when they were naïve college students.

Now Andy (Zac Efron) and Vicky (Sydney Lemmon) are living off the grid, hiding from the mysterious government agency that wants to use Charlie’s powers for nefarious ends. Andy works as a “life coach” who uses his abilities for such purposes as curing a young woman of her smoking habit. Such strenuous efforts don’t come without a cost, as every time he uses them his eyes start to bleed, like an ocular stigmata.

But in Stephen King stories, the past has a way of catching up with you. After Charlie’s powers become noticed, a dastardly government operative (Gloria Reuben) dispatches Rainbird to hunt down the family and take possession of Charlie. When his first attempt doesn’t succeed, father and daughter take it on the lam, temporarily finding refuge with an elderly farmer (veteran actor John Beasley, terrific) before eventually winding up in the agency’s clutches. Needless to say, it all results in an extremely fiery climax.

It’s a bit depressing that director Keith Thomas, who wrote and directed one of the more audacious and original horror films in recent years, 2019’s The Vigil, has gravitated to the mainstream with this competent but uninspired effort. The same goes for the rote screenplay by Scott Teems (Halloween Kills), which provides none of the dark wit that might have enlivened the outrageous storyline. This is the sort of material that cries out for the baroque stylizations of Brian De Palma, whose commercial breakout came with the not dissimilarly themed Carrie.

To their credit, the actors give it their all, with Greyeyes compelling as the steely Rainbird and Efron affecting as the father desperately trying to protect his daughter and teach her how to control her powers. (Yes, Efron has aged into dad roles but not, as a shirtless opening scene demonstrates, a dad bod.) The film is also admirably fast-paced, running twenty minutes shorter than the bloated 1984 original.

But while it has a few genuine scares (cat lovers will want to avert their eyes for one horrific scene), it never achieves the deliriously freaky heights one expects from a film version of one of King’s cheesier novels. It’s a lesson that Blumhouse, which is planning a remake of another lesser King adaptation, Christine, should take to heart.

Speaking of Christine, the 1983 film version was directed by John Carpenter, who was slated to direct the original Firestarter until Universal got cold feet after the disappointing box-office of The Thing. In a nicely poetic touch, Carpenter, along with his musical collaborators Cody Carpenter and Daniel Davies, has provided a terrifically spooky electronic music score for this effort — perhaps its most distinguished element.