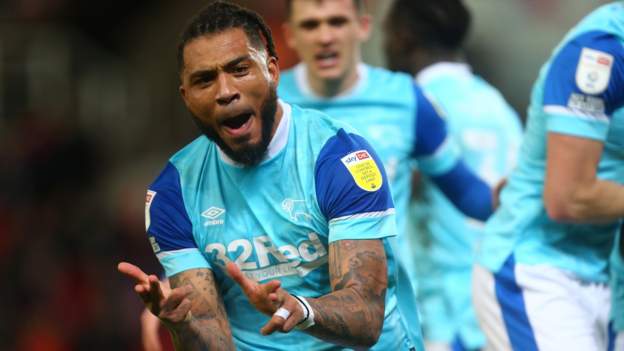 Championship bottom club Derby County moved to within 11 points of safety as they scored a goal in each half to beat promotion-chasing Stoke City.

Teenager Luke Plange gave the Rams an early lead, his second goal in three games, only for Stoke substitute Tom Ince to leave the bench and net on 78 minutes against his old club, just seven minutes after coming on.

But Colin Kazim-Richards put Derby back in front with a low left-foot finish on 85 minutes to earn Wayne Rooney’s side their third straight win.

That puts Derby, docked 21 points by the EFL, within four of 23rd-placed Barnsley and 11 behind fourth-from-bottom Reading, while Stoke have slipped four points adrift of the play-off pack, having now won just once in five games.

After looking so good in early season, Michael O’Neill’s Stoke have stuttered, having now only won four times in 11 games since losing top scorer Nick Powell with a fractured shin in October, during which they have averaged less than a goal a game.

They have also been kept in cold storage by three successive Covid postponements, including coronavirus-related issues of their own, which meant they had not played in 19 days since the 0-0 draw at home to Middlesbrough on 11 December.

Derby, by contrast, are on the crest of a wave after following up their successive 1-0 home wins over Blackpool and West Bromwich Albion.

They have a goal difference of just -1 – the best in the bottom 10 clubs in the Championship – and have given themselves genuine hope that they can actually pull off an apparent miracle and stay up.

Rooney’s Rams took the lead on 16 minutes when Plange was slipped in behind down the inside-right channel by Poland international Kamil Jozwiak and he ran on to confidently arrow home a low right-foot finish to the left of Stoke keeper Adam Davies.

But chances were few and far between at both ends – and Stoke looked to have escaped with a draw when Ince levelled with what proved to be the Potters’ only effort on target.

He rifled home a low left-foot shot from a half-cleared corner to score only his second league goal this season, the other also coming against Derby in a 2-1 defeat at Pride Park in September.

But Kazim-Richards, who was gifted a winner against West Brom three days ago, was this time fed by fellow substitute Ravel Morrison to put Derby back in front – and send the travelling Rams faithful delirious.

Having equalled their best run of results under Rooney, going back to January, Derby’s first game of 2022 is scheduled to be the Monday bank holiday trip to Reading, while Stoke are due to be in action the same afternoon at home to Preston.

“Their two goals were poor ones to lose. We defended them poorly. But we’re just disappointed with the quality of the performance.

“The players gave their all and we pressed well and, at 1-1, we looked the most likely of the two sides to win.

“But we were just too untidy. Whether that’s down to the 19 days without playing, that’s a potential reason. But we can’t look at that. We just didn’t take care of the ball well enough.”

“We just have to keep believing in ourselves. The fans have been excellent for us all season throughout a very difficult period for the club.

“But when they see the energy and application being out in, it lifts them even more – and we’re very grateful for their support.

“It was good composure from Colin and a really nice pass from Ravel to put him in. But all three subs did well when they came on.”