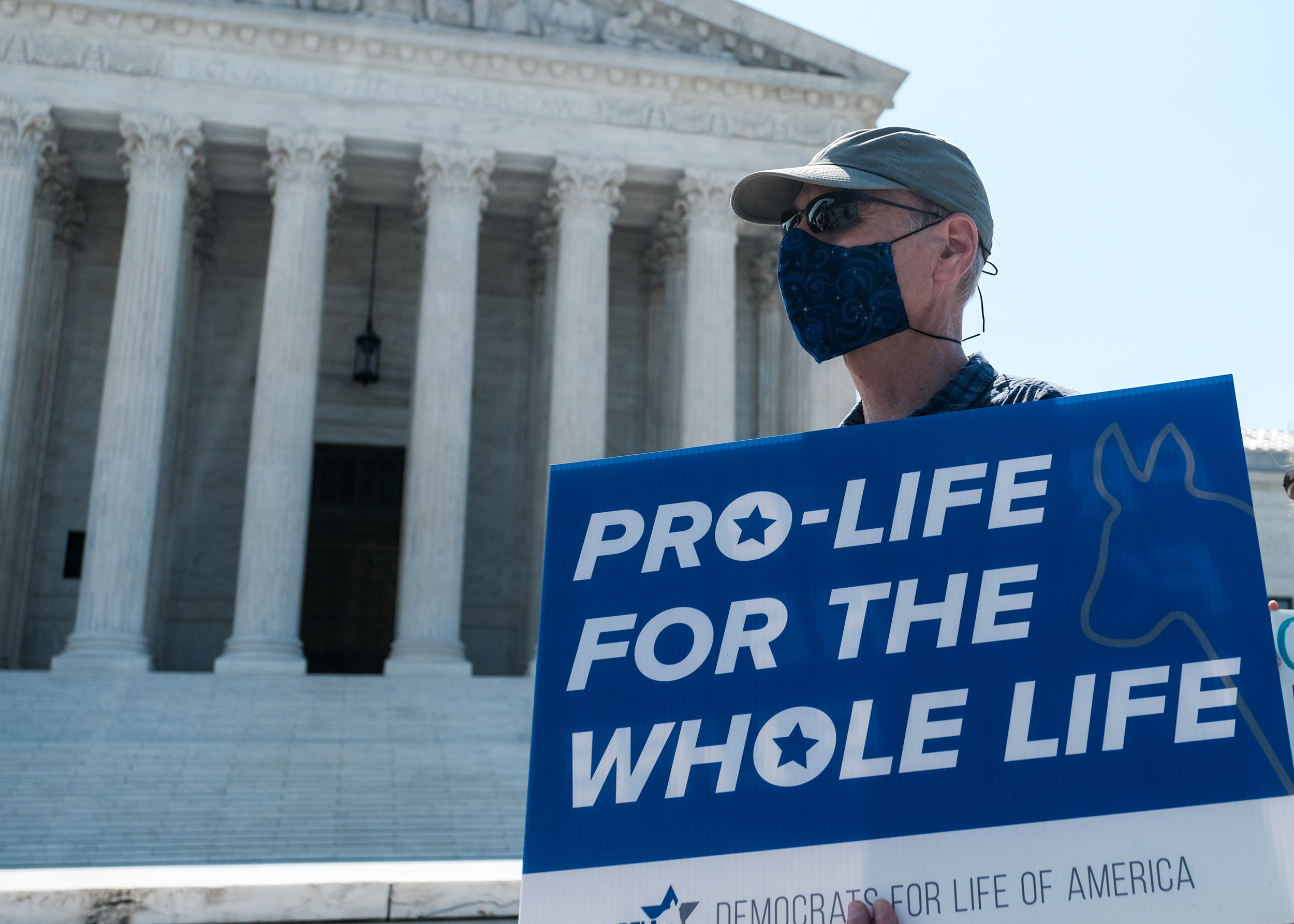 Over the past month, GOP governors have spurned their state legislatures’ attempts to intervene on a controversial social issue. South Dakota’s Kristi Noem, Arkansas’s Asa Hutchinson and most recently North Dakota’s Doug Burgum all declined to preserve female-only spaces or regulate the use of puberty-blocking drugs on children—perhaps recalling the business pressure Indiana, North Carolina and Georgia faced over “bathroom bills” and religious freedom protections.

Few have followed this trend more closely than pro-life Americans. That’s not only because many of them disagree with those governors’ decisions. The pro-life movement’s primary goal has, for decades, been the overturning of Roe v. Wade, which would return decisions about the legality of abortion to the hands of state legislators and governors. The news from Arkansas and the Dakotas has not inspired confidence. On the one hand, numerous GOP governors have been signing substantive abortion regulations—including bans on the selective abortions of children with Down Syndrome. But on the other, if state-level Republican leaders prove unreliable on today’s most controversial social issue, it could bode poorly for the fight for protection of the unborn, even as abortion cases make their way through the courts. After all, abortion will only become a more high-pressure issue on the state level if Roe isn’t around anymore. Whatever pro-choice business pressure exists now will only increase then.

Some pro-lifers now call on the federal judiciary to bypass states altogether with a national ban on abortion, based on extending 14th Amendment protections to the unborn. But sooner or later, pro-lifers intent on making abortion not only illegal but unthinkable will have to engage with states and legislatures—and with people outside the GOP. The good news is, the movement’s history demonstrates how that’s possible.

Before Roe v. Wade, the pro-life movement had a strong track record of state success, even in very liberal states. It successfully halted abortion bills from Maryland to Minnesota, and nearly reversed New York’s abortion law, the most permissive in the nation. One reason was pro-lifers’ political homelessness—a willingness to take wins where possible, and to seek different types of wins. In addition to advocating for legal protection, many anti-abortion activists called for poverty relief, access to health care and even pacifist foreign policy.

If anything, the pro-life movement of the 1960s and early ’70s was comfortably to the left of the Lyndon Johnson administration. Its main target for criticism wasn’t the feminist movement, but corporate and professional elites who promoted abortion to exploit women and the poor, undercutting the ideals of the Great Society. Through various foundations, scare tactics about “overpopulation” and the profitable abortion industry itself, the wealthy aimed to prevent lower-class people from having children—before those children ended up costing them welfare dollars, or motivating women to leave their work places. According to historian Daniel K. Williams, early pro-lifers saw abortion as a “cheap, irresponsible, and violent solution to problems that required human investment.” Legal abortion, in addition to being a billion-dollar business in its own right, provides the upper crust of an unequal society a way to avoid caring for those in need.

Many in the pro-life movement also spoke out against the Vietnam War. Richard John Neuhaus, who would go on to found the influential religious journal First Things, once announced to a pro-life student march that their cause was “related to the protest against the Indochina war, the militarization of American life, and the social crimes perpetrated against the poor.” Neuhaus also insisted that “the anti-abortion forces are not instruments of political and social conservatism.”

No movement is ideologically uniform, of course, and not every pro-lifer was anti-war and pro-welfare. But Neuhaus’s view was widespread enough that pro-lifers were very often able to get left-leaning politicians to see things their way. Ted Kennedy in 1971 expressed his hope that history would “recognize this generation as one which cared about human beings enough to halt the practice of war, to provide a decent living for every family, and to fulfill its responsibility to its children from the very moment of conception.” Meanwhile, some of the biggest advocates of legalized abortion were pro-business Republicans—whether liberals like Nelson Rockefeller or conservatives like Barry Goldwater.

Roe changed everything. After the ruling, the pro-life movement became a more uniformly right-wing cause as its focus narrowed to legal and constitutional issues. Ronald Reagan—who as governor of California had signed one of the nation’s first abortion legalization bills—attempted to court the movement in his 1976 presidential campaign. He calculated that, by pledging support for the “aims” of a Human Life Amendment (which most pro-life Democrats shunned, believing it would die in committee), he could ignore pro-lifers’ calls for health care, peace and poverty relief but still get the pro-life vote as the movement reeled from its Supreme Court defeat.

Reagan calculated correctly. The Human Life Amendment never made it out of the Senate, and pro-life Americans have been in the GOP’s corner ever since—still angling for judicial success, but rarely at the forefront of debates about health care, the social safety net or foreign policy.

Since then, it’s only become clearer that saving unborn lives requires both legal advocacy and assistance for women under economic or social pressure. Basic medical costs, including the cost of giving birth in a hospital, have skyrocketed. Large majorities of women who have abortions cite financial reasons as the driving factor behind their decision. Influential billionaires, media figures and politicians continue to promote abortion as a means of cutting welfare costs, getting women to “contribute to the economy” abroad and promoting law and order at home.

Outside the legal battles, the pro-life movement has found great success promoting pregnancy centers that provide women with vital care and resources—from prenatal care and ultrasounds to baby clothes and post-abortion counseling. That’s very much within the tradition of the movement, and it underscores the fact that providing health care and financial support for moms saves children’s lives. And saving lives will continue to take work, even if Roe is overturned and a federal ban—or 50 state bans—are enacted.

Some Republicans appear willing to reconsider their party’s priorities along these lines. Sen. Mitt Romney’s (R-Ut.) proposed Family Security Act, which would provide regular cash benefits to parents regardless of their tax or employment status, would slash the child poverty rate by a third. Various proposals for child care allowances and other forms of family support are now coming from the Left and the Right. Pro-lifers can applaud these efforts, and even ask for more. They can ask Republicans to break with the billionaires and consider welfare and health care measures that send expectant mothers the message that we don’t want them to be forced to choose between abortion and destitution—even when that means aligning with the Left. Take wins for families and kids—legal protection alongside poverty relief and health care assistance—from either side.

As New York Times columnist Ross Douthat has pointed out,

Saying “yes, the Constitution that protects ‘persons’ should protect the hidden and helpless person in the womb,” and “yes, we will pay whatever price in spending and social support that this principle requires” are not contradictory positions: They are the same argument on different fronts.

To put it more pointedly, some pro-lifers are now asking whether our approach to constitutional law is worth keeping, if it fails to protect basic human goods like life and family formation. Why not ask the same of our economic and health care systems?

To be sure, we are not living in 1971, when a “consistent life ethic” approach to abortion demonstrated significant political viability and influence. And there is no reason to rebuff Republicans who have shown that they prioritize family over business. But while Republican governors avoid social issues and Republican-appointed judges appear to pass up opportunities to challenge Roe, it may be time to look for victories in new (or rather, old) places.